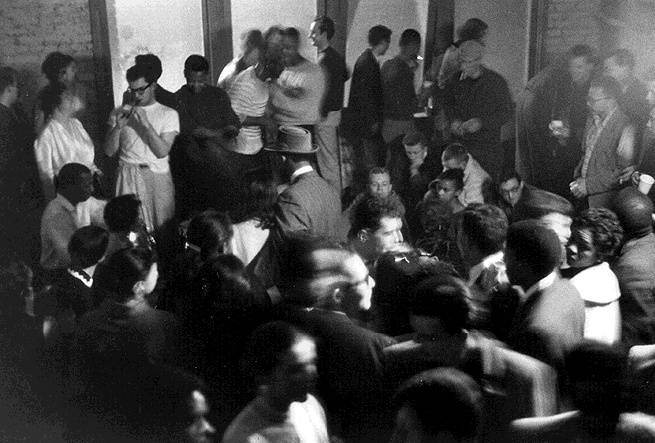 The Party Pad, c. 1959, an underground club in the old Produce District, adjacent to the thriving scene in North Beach. This is the scene down on Davis Street at The Party Pad, inside an old produce warehouse. 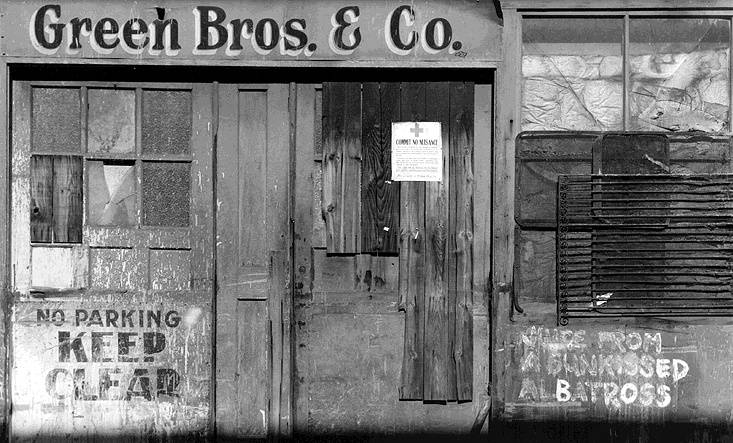 The Party Pad was inside this desolate old food warehouse, seen here in 1959.

During the fall of 1958, the beat scene’s growing literary reputation drew new mainstream attention to North Beach’s bohemian colony. In late August, San Francisco’s district attorney prosecuted Ferlinghetti, the beat bookstore owner, for the sale of obscene material, and in September, Jack Kerouac’s On the Road hit the nation’s bookstands. Together, these two events unleashed a torrent of national media attention on San Francisco’s North Beach scene. Look, The Nation, Harper’s Magazine, Time, and Playboy all ran features covering beats in the neighborhood. Entranced by the notion of an alternative to traditional family values, most of these early national reports painted a pathetic picture of the North Beach denizens.(17) Nevertheless, the attention generated new waves of visitors and migrants. By early 1958 the neighborhood’s thronging bars were drawing local columnists in search of a good story and free drinks, and the beat social world entered the pages of the San Francisco press.(18)

In the late spring of 1958, the San Francisco Examiner’s June Muller and the San Francisco Chronicle’s Allen Brown each responded to North Beach’s increased notoriety with an investigative series into the beat social world. Neither Muller, a socially active woman, nor Brown, a closeted gay man, was a teetotaler, but each characterized the North Beach scene as an embarrassing underworld of drugs, sex, and fake bohemianism.(19) Their two series reflected and reinforced the narrative framework within which the city’s future beat policy discussions took place.

In their reports, Muller and Brown limited the conceptual borders of the beat bohemia to North Beach. The bars and cafes along Grant Avenue did provide a social hub for the beat bohemia, but the beat professional and social world extended into the San Francisco Art Institute, the San Francisco State College Poetry Center, areas of the Fillmore District, and locations elsewhere in the Bay Area, including Berkeley and Stinson Beach. Even the beat scene’s famous coming out event, Ginsberg’s reading of Howl at the Six Gallery, occurred away from North Beach, in the Cow Hollow neighborhood. Within this tightly bound commercial scene of North Beach, Muller and Brown drew attention to the male beats’ disdain for breadwinning manhood. Muller lamented that the industrious and creative poets and authors who had sparked the beat movement (Ginsberg, Kerouac, and Gregory Corso) no longer belonged to the North Beach scene. She cast the new male beats, by contrast, as unproductive, childish poseurs. Muller quoted North Beach’s “oldtimers”—including both “the Bohemians and the businessmen”—who scoffed at male beats as: “ ‘The motorcycle crowd without motorcycles.’ ‘Little children from the country.’ ‘Juvenile delinquents a little bit grown up.’ ”(20) 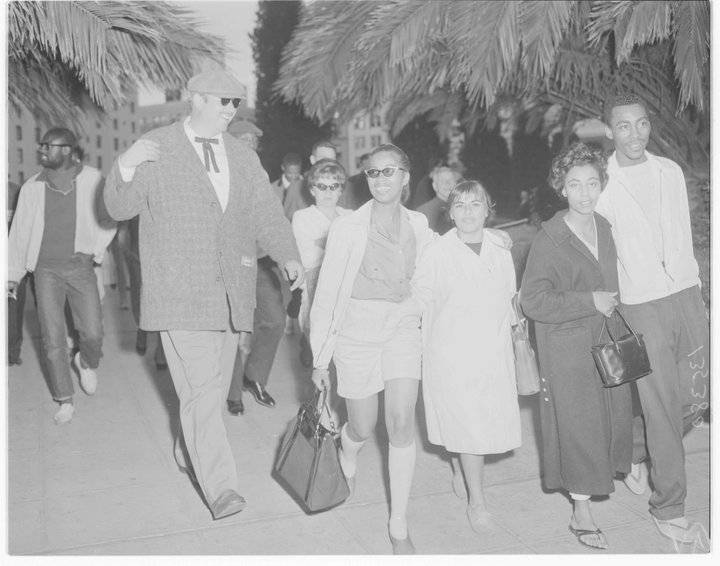 The local and national media’s repeated characterizations of the beats as children refusing to mature appeared at the same time that suburbanization and downtown growth efforts were transforming the household composition of many American cities. San Francisco entered the 1950s with a population solidly made up of families. As in Chicago, where boosters touted their metropolis as a “city of family men,” postwar leaders in San Francisco prided themselves in their city’s family orientation. Managerial growth experts assumed that they would reinforce their cities’ family character with redevelopment policies expanding employment related to finance, insurance, and real estate (FIRE); by 1960 San Francisco’s FIRE economy was the city’s second largest job-providing sector. In cities like San Francisco, Chicago, and New York City, these white-collar jobs attracted young white college graduates who were either single or married without children. By 1960 more than half of San Francisco men in their twenties were unmarried, and between 1950 and 1960 the percentage of women in their twenties who were single jumped 9 points to 29 percent. This expanding corps of young downtown employees enjoyed an off-work life largely free of many forms of traditional adult control. Within the context of these demographic and social changes, cultural conservatives worried over the beats’ public rejection of the traditional markers of adulthood.(21)

None of the beats’ deviations from traditional models provoked more concern in San Francisco than the bohemians’ abandonment of the city’s supposedly color-blind perspective. Muller explained that beats communicated in “the frantic paced parlance of jazz,” and Brown condemned white beat women for using their sexual freedom to associate with black men. For both reporters, black people entered the beat scene only as objects of white obsession rather than as active contributors to the North Beach bohemia. Brown, a proponent of color-blind liberalism, based his understanding of the beats’ relationship with blacks on Norman Podhoretz’s nationally renowned beat critique, “The Know-Nothing Bohemians.” Both Brown and Podhoretz characterized the white beats’ interest in blackness as an expression of the bohemians’ paternalistic “desire for the primitive.” Traditional liberals continued to voice this sort of critique through the decline of the beat scene. In 1960 a jazz publicist remarked to the Chronicle’s music critic that when the beat scene was “really swinging,” “you saw a tremendous number of young Caucasian girls escorting Negro males. These girls were making a determined effort to prove they had no racial inhibitions and no prejudice.” Not until the naive beat “girls” had “grown up,” the publicist continued, would they “realize . . . that true racial tolerance only comes when the color of a man’s skin is disregarded completely.”(22)

Liberals initially warned that this bohemian race mixing would result in violence. The Chronicle’s Brown quoted one poet explaining that the white beats’ supposed interest in black men was “all tied up with the [beat] death-wish, of course.” Journalists located evidence for this racially oriented “death-wish” during their coverage of the Connie Sublette murder. On the evening of June 17, 1958, Sublette, a white North Beach habitué, was killed only hours after attending the North Beach memorial service of Paul Swanson, her fiancé. Days earlier Swanson had seemingly demonstrated the beats’ proclivity for self-destruction by tumbling off the roof of a North Beach apartment building. Following the funeral, the grief-stricken Sublette left upper Grant Avenue to visit her estranged husband, Albert Sublette, in the interracial Haight-Ashbury neighborhood. Not far from Albert’s home, however, Sublette encountered Frank Harris, a black civilian launderer on leave from a docked Navy supply ship. Harris later claimed that Sublette willingly accompanied him into a nearby alley for a sexual liaison but that the young woman had started scream- ing after he undressed her. Harris asserted that he was only attempting to silence Sublette when he suffocated her to death. The following morning police discovered Sublette’s disrobed, lifeless body, and by that evening authorities traced the trail of evidence back to Harris aboard his ship.(23)

In their coverage of the murder, the city’s three major dailies eschewed the traditional tale of white female honor ravaged by violent black male sexuality. Instead, the local press focused on Sublette’s history in North Beach and suggested that her beat lifestyle—and particularly her sexual appetite—led to her homicide. In the following days, the press tagged the young woman as an “obscene, drunken,” “flamboyant” “playgirl” who had “engaged in several shoddy sexual liaisons,” had once streaked along Broadway “stark naked,” and was wearing a “sleazy” dress on the night she was murdered.(24)

Downtown journalists further asserted that while young women required authoritative, masculine supervision, the beat world had allowed Sublette to live a dangerously untethered, independent life. The young woman, one journalist melodramatically noted, wore “a St. Christopher’s medal—guardian of travelers—around her neck.” This pretension at independence, the press continued, masked a hunger for male guidance. Prior to Sublette’s murder, Muller reported, Sublette had been witnessed striking Swanson and hysterically sobbing, “You can’t leave me,” “I can’t go on alone.” But Swanson, Muller reminded her readers, had abandoned Sublette when his beat nihilism took him over the ledge of the North Beach rooftop. (By the time of Sublette’s murder, police had determined that Swanson’s fall had been accidental and not a suicide, but journalists continued to attribute his death to a beat penchant for self-destruction.) Sublette’s whirlwind of North Beach recklessness and criminality, the press made clear, was facilitated by the failures of the weak white men in the North Beach bohemia.(25)

Through the Sublette story, the downtown media illustrated that the beat women’s sexual cravings were especially dangerous because female beats spurned the mainstream’s supposedly color-blind outlook and turned to black men for satisfaction. White reporters readily accepted Harris’s assertion that Sublette consented to his initial advances, and the News, Chronicle, and Examiner all used photographs to communicate to readers that Sublette’s estranged husband was dark-skinned.(26) Ultimately Sublette’s unrooted, desperate life had brought North Beach bohemia; the city’s working-class waterfront; and the interracial, centrally located Panhandle neighborhood into combustible contact.

The journalists covering the story all looked to the SFPD to reestablish its authority over the chaotic mixture of races and urban spaces that a life- style like Sublette’s had created. The Examiner juxtaposed its descriptions of Sublette’s wild life with a steady narrative of the Homicide Bureau’s gumshoe investigation. Describing the bureau’s deliberate and rational work, the Examiner reported: “From Harris’ story of his whereabouts the night before, from habitués of the jukebox joints and the gin mills, the clubs and the taverns and such places as the Co-Existence Bagel Shop, which members of the ‘Beat Generation’ frequent, and from backtracking on the last night of Connie Sublette, the police put together the jigsaw of death.”(27) Traditional liberals and conservatives alike regarded police officers as the public servants best equipped to address the alleged racial disorder set loose by the beats. 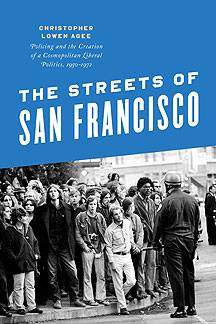 Reprinted with permission from The Streets of San Francisco: Policing and the Creation of a Cosmopolitan Liberal Politics, 1950-1972 by Christopher Lowen Agee, published by the University of Chicago Press. © 2014 by The University of Chicago. All rights reserved.
Retrieved from "http://foundsf.org/index.php?title=The_Dangerous_Beat&oldid=22836"
Share this page: