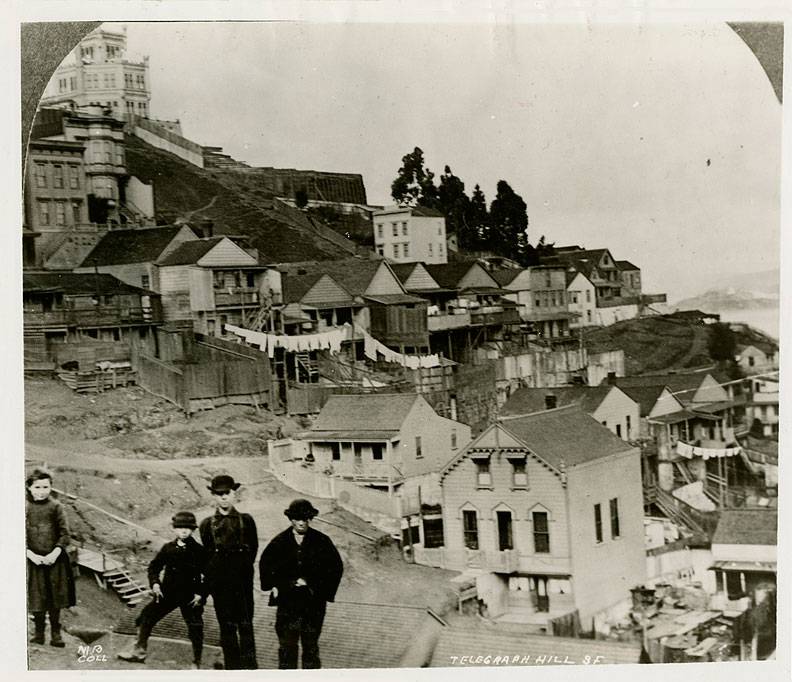 No part of San Francisco has a more colorful history than our own northeast corner, where so many of the City’s characters have made their homes, their livings, and their marks. Telegraph Hill was a natural landmark long before that name (or the telegraph) existed. In the previous Semaphore (Summer 2016), “Happy 30th Anniversary, Telegraph Hill Historic District” described how the buildings on the crest and northeastern slope of Telegraph Hill were saved from the surrounding devastation of the 1906 earthquake and fire. Fifty years later, Telegraph Hill Dwellers was founded to prevent the destruction of what remained of the Hill’s late-Gold-Rush heritage. Thirty years ago, in 1986, the City granted protection to some of its oldest and most distinguished buildings by designating the Telegraph Hill Historic District.

A Brief Tour of the Survivors

Which building in the Telegraph Hill Historic District is the oldest? According to Anne Bloomfield, it’s hard to be sure. Both 1301 Montgomery and 291 Union appear on the U.S. Coast Survey map of 1853. That makes them both older than all but two buildings in the Jackson Square Historic District.

Although now covered in stucco, its pre-1870 photo shows a simple brick commercial building like many in Jackson Square—possibly the City’s oldest extant brick building. What was a commercial building doing more than 200 feet above the waterfront? Whether it was built as a factory, a brewery, or for some other purpose, its first known use was likely the salesroom and “manufactory” for Dr. David G. “Yankee” Robinson’s celebrated “Vegetable Bitters” advertised in the 1852 San Francisco Directory as “composed entirely of California vegetables.” This brick building also housed a barber shop in 1850 and a grocery store from 1881 to 1886. In the 1920s it was a pool hall inside “John Ortega’s Soft Drinks,” the Prohibition equivalent of a saloon. Dr. Robinson lived at 9 Calhoun Terrace—we’ll learn more about him below. 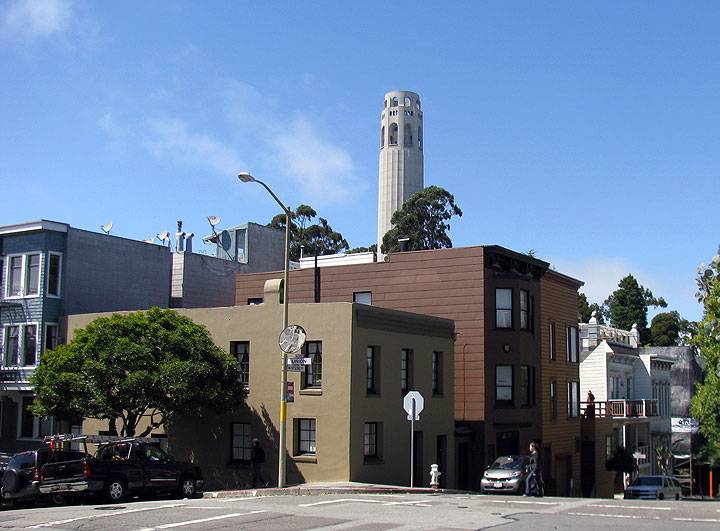 The first and for a while the only grocery store on top of the Hill was at 291 Union, in the oldest surviving residential building in San Francisco. The land at 291 Union was granted to wharf owner Benjamin R. Buckelew by the Alcalde of San Francisco in 1848, and Buckelew sold the land to John Cooney in 1850 for $140. According to David Myrick, who tells many stories of the Cooney family in his book San Francisco’s Telegraph Hill, John was born in Ireland. His wife, Hannah, and their first two children were born in England, and the next two in Australia. The wood for the house accompanied the Cooneys from Australia, and they are said to have lived in a tent on the lot during construction to prevent its theft. Once the house was completed in 1853, Cooney opened the grocery store. “Merchandise in the store wavered from groceries to ‘Yankee Notions’ —ribbons, laces, widow’s weeds and various drugs housed in little glass cases—usually imported from England in spite of the generic term.” (Myrick, page 168).

The Cooney store lasted until 1906, but the heirs kept the building in the family until 1937. It was the first of Telegraph Hill’s multi-storied, balconied houses. Its Italianate “false front” was likely added in the 1880s to modernize the house. The Cooney family also purchased the land next door at 287-289 Union from Buckelew, where they built the Gothic Revival Cottages (c1857) used as rental units.

The third oldest building in the historic district is 9 Calhoun. Although in 1880 there were five houses on the west side of Calhoun and seven on the east, quarrying of Telegraph Hill by the infamous Gray Brothers (see p. 4) had the greatest impact here. By 1899 all of the houses on the east side had been destroyed. The only one remaining today is 9 Calhoun, built by Dr. David G. “Yankee” Robinson in 1854. In addition to his famous Vegetable Bitters, the WPA San Francisco Theatre Research, published in 1938, chronicles Dr. Robinson’s history as a physician, comedian, and theater entrepreneur. On July 4, 1850, he opened a 200-seat “Dramatic Museum” on California Street with a localized adaptation of Seeing the Elephant, a popular circus deception. An actor and playwright himself, Robinson also started the first drama school in San Francisco. 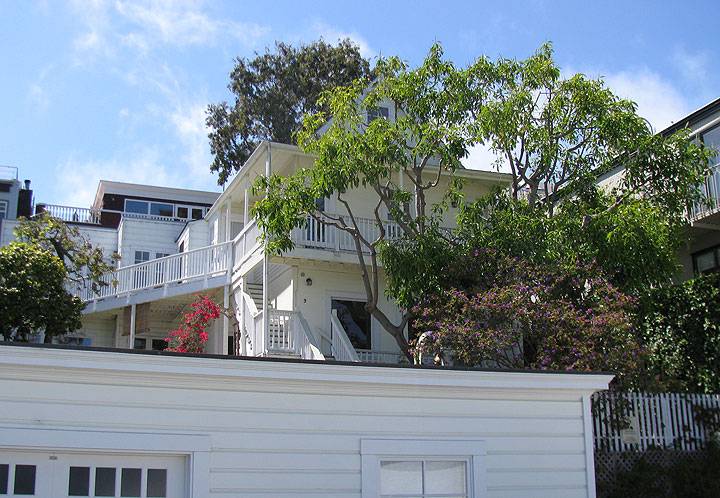 After these first three, historian Anne Bloomfield’s 1985 report for THD presents the construction sequence from 1857 to 1870 of the surviving buildings within the District boundaries. Although all contribute to the historic character and significance of the district, several of these survivors deserve special notice. 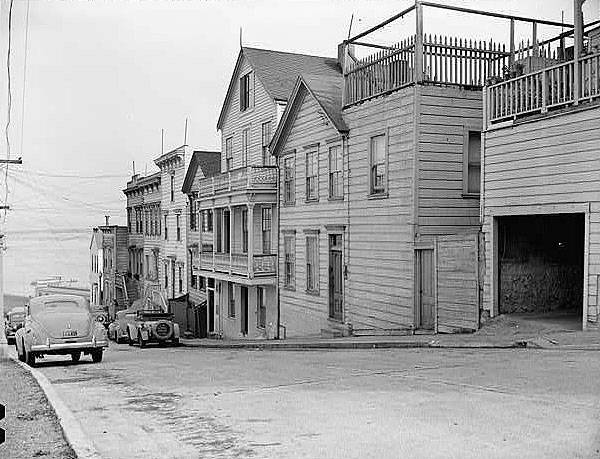 As early photos show, the houses on the south side of Alta provided residents with unobstructed views of the waterfront, a distinct advantage for waterfront workers. The building at 31 Alta, a three-and-a-half story, gable-roofed dwelling with a two-level balcony, appears prominently in these photos. Built by Captain Richard Andrews in 1858, it has scarcely been altered since. Its occupants included a sailmaker in the late 1880s and three bachelor brothers who worked as watchmen on the docks in the 1920s. In the late 1920s it became the colorful Telegraph Hill Tavern, advertised by its proprietress as having “all the atmosphere of the Montmartre with a Marine View.” (Myrick, pages 179-180) 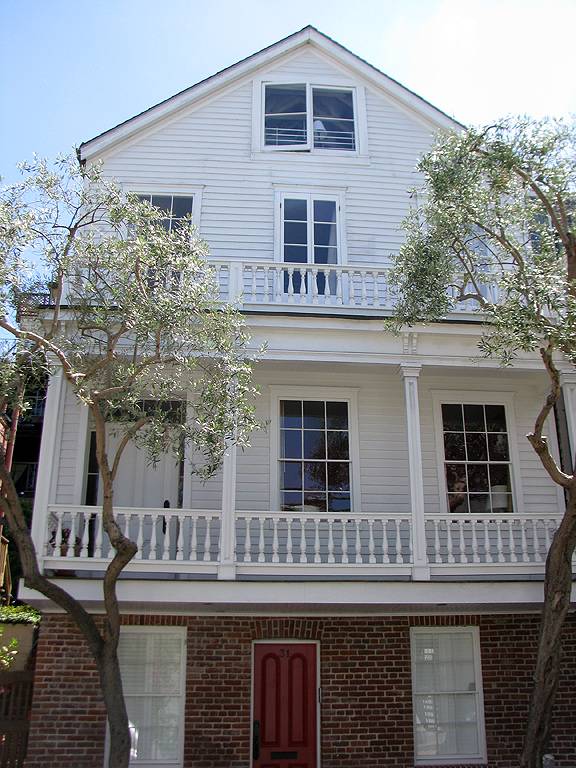 Aside from being a gem in the Telegraph Hill Historic District, 31 Alta features prominently in many books documenting the historic and architectural treasures of San Francisco. It is listed in the National Trust for Historic Preservation’s Guide to San Francisco, Myrick’s San Francisco’s Telegraph Hill, and is rated as a significant structure in Here Today, an official architectural survey adopted by the Board of Supervisors. Thanks go to Bradford Wilmore, a former president of THD, who carefully restored this handsome three-story home for his family in 2005.

This flat front Italianate building on the southeast corner of Montgomery and Union is listed on the National Register of Historic Places (#79000532) for its architectural and historical significance.

An 1861 lithograph shows the former Hudson’s Windmill on this site. The windmill was probably destroyed by fire on July 4, 1861, along with many other structures on Telegraph Hill. Later that year, the construction of 1254-1256 Montgomery began, first as a one-story structure, with a second story added sometime before 1886. Originally it was a rooming house with twenty-five rooms, each with a door to a hall, and most with additional doors to any adjoining room in case a family wished to rent more than one room. Architecturally it is an interesting variation of the formal Italianate style of the 1860s, altered to meet the needs of a rooming house. Later the building was converted to six railroad flats, with baths and kitchens squeezed in at the rear of each flat. The only significant change since then was in 1939 when the City lowered the street in front of the building by twelve feet. 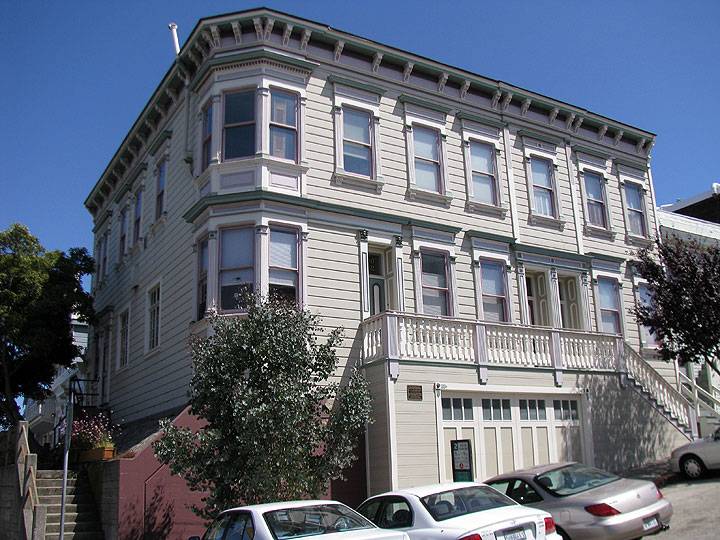 The building is also important as one of the Telegraph Hill survivors of the 1906 fire. A tenant, Giovanni Doneri, with his oldest son and neighbors, cooled the walls of the building with burlap sacks soaked in wine from casks in the basement. In 1956 it was saved from demolition to make way for an 11-story apartment building, a project halted with the help of the newly formed THD.

The Filbert Steps—The Heart of the District

Pre-1870s Telegraph Hill is preserved most completely along the north side of the Filbert Steps (below Montgomery) and along Napier Lane. Noteworthy examples follow.

228 Filbert (1869)
This Gothic Revival house is the top contender for the most outstanding contributor to the District. Built in 1869 by Phillip Brown, a seaman turned stevedore, this house is an expression of a simple “Carpenter Gothic” style. Although the form of the house suggests there was a store in the basement, David Myrick explains in his book San Francisco’s Telegraph Hill that because Phillip Brown decreed that his wife was not to be a shopkeeper, the basement was used, instead, as the family dining room. (Myrick, page 187) It is sometimes incorrectly referred to as the “Captain’s House” because Captain Laughton was a frequent visitor who spent so much time on the front porch that people assumed it was his home.

224 Filbert (1859)
Built by James Callaghan, a laborer and later foreman of a warehouse on the waterfront, this house is a good example of the simplest type of home of its period. The roofline is unusual, being in the pattern of an old barn roof, with the center peaked up sharply and the outer edges at a flatter pitch.

10 Napier (1857)
This is the oldest house on Napier Lane (formerly Billings Place), the only boardwalk surviving in the District and one of the few left in San Francisco. Vying for the fourth oldest in the District and essentially unchanged, it was originally the home of Mortimer (Murty) and John Clark, teamster & laborer at Greenwich Dock Warehouse. Its Italianate false front likely dates from about 1887, but the outline and roof of the original 1857 board-frame cottage remain.

The fire of 1906 was an architectural, social, and historical turning point for the Hill. While adjacent North Beach was quickly rebuilt in a different style, Telegraph Hill, meanwhile, continued to exist in its pre-quake world until the 1930s. Artists and writers, attracted by its cheap rents and scenic qualities, began moving to the hill during the 1920s. Despite their unconventional pursuits, they blended in with the working class neighborhood. And because vehicular access was restricted to Union Street, infill development was limited to small-scale construction stylistically compatible with the earliest development on the hill.

Telegraph Hill’s geographic isolation ended with street grading, new concrete retaining walls, sidewalks, and streetlights—projects funded by the Work Projects Administration (WPA). The paving of Montgomery and Alta Streets in 1931, the construction of Calhoun Terrace in 1939-1940, and the establishment of a municipal bus route to Coit Tower in 1939 (now the Coit 39), heralded new development in the Modern style of the late 1930s.

Just before World War II, the Hill gained a dozen new buildings of experimental designs in the Modern style. These buildings are significant for their architects who, although unknown at the time, later achieved fame. These structures emphasize views and horizontality and relate positively to their hillsides and gardens,

The most celebrated of these is the Kahn House at 66 Calhoun. Built in 1939, it was designed by Richard Neutra, one of the founders of the International Style. Next door to the Kahn House is Ian Hoeffler’s apartment building at 38–50 Calhoun, which was built in 1937 in the Modern style and steps dramatically down the hillside. Its architect never achieved fame, but its tenants did: The apartment at 42 Calhoun is known as the temporary residence, during 1940, of Frida Kahlo and Diego Rivera. 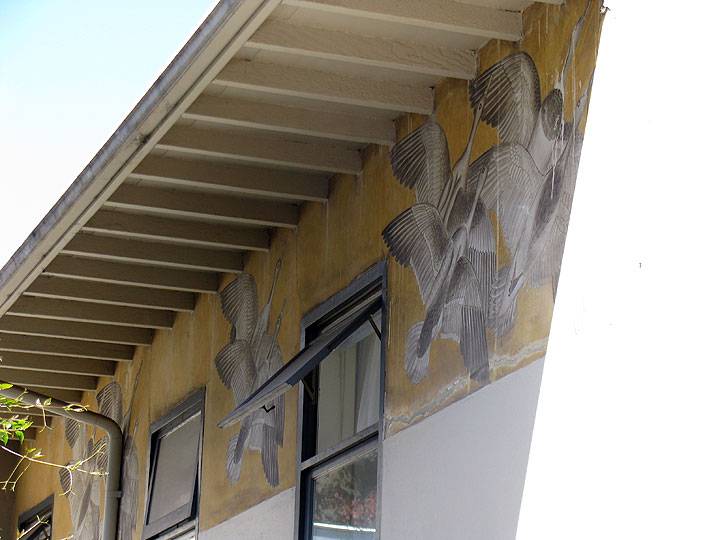 Architect William Wurster, founder of the Second Bay Area Tradition Style, designed the Duck House at 60 Alta for muralist Helen Forbes in 1935. This dwelling takes its name from the duck frescoes painted by Helen Forbes and Dorothy Puccinelli using a traditional Italian technique. Forbes and Puccinelli also painted the murals that adorn the Mothers Building at the SF Zoo. Mayris Chaney (Mrs. Hershey Martin), a renowned dancer, worked with Eleanor Roosevelt in the Office of Civilian Defense and was one of her closest friends for almost twenty years. She often entertained the First Lady at 60 Alta. And finally, it was in the Duck House in the 1970s that Armistead Maupin began writing Tales of the City, as he watched the activities below on Napier Lane. Among his guests there was Rock Hudson. Maupin also lived for a while on the Filbert Steps at 226A Filbert. 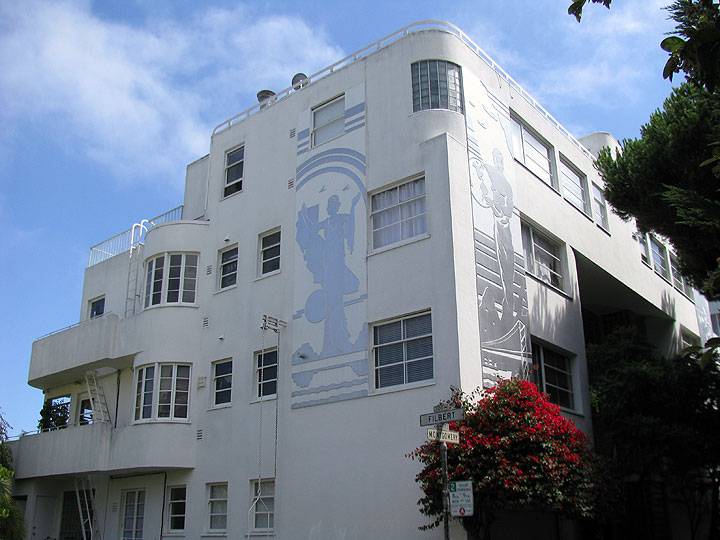 One of the most well-known and photographed buildings in the District is the Art Moderne building at 1360 Montgomery, famous as the setting for the 1947 movie Dark Passage, starring Humphrey Bogart and Lauren Bacall. Although the architect never became well known, Irvine Goldstine designed this 1936 building with contractors-owners Jack and Ralph Malloch. Etched into the glass over the central entrance are a gazelle, palm trees, and ocean waves. Sgraffito wall decorations, created by carving into several layers of cement, adorn both the Montgomery and Filbert sides and include a worker holding the world above the Bay Bridge. The etching and wall decorations are by Alfred Dupont.