Difference between revisions of "THE DESTRUCTION OF NIHONMACHI" 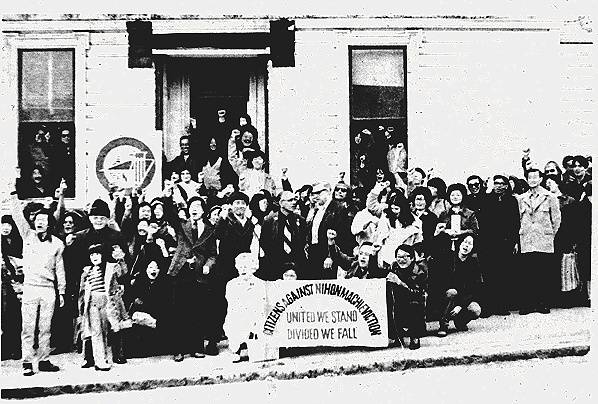 The giant mall known as "Japantown" was once the thriving center of the Japanese-American community in San Francisco. Before World War II, "Nihonmachi," the Japanese-American neighborhood, was roughly 20 square blocks and housed 95% of the city's Japanese-Americans. Forced relocation during World War II uprooted almost all, but many returned after the war to continue residency. During the sixties and seventies, giant real estate interests cast a greedy eye upon the areas prime real estate. Giant corporations, like Japan's Kintetsu Corporation, conspired with the City's Redevelopment Agency to displace many low-income Japanese-Americans and turn the area into its present state as Japanese theme park mall. The Citizens Against Nihonmachi Eviction (C.A.N.E.) was formed in 1973 to fight the eviction of low-income people and small businesses. They successfully mobilized thousands of people to demonstrate against City Hall and Kintetsu, and forcibly occupied several buildings slated for destruction, much as the tenants did at the International Hotel. Real Estate interests prevailed however, and foreign-owned hotels and retail centers displaced hundreds of local, home-grown Japanese-American residents and businesses.