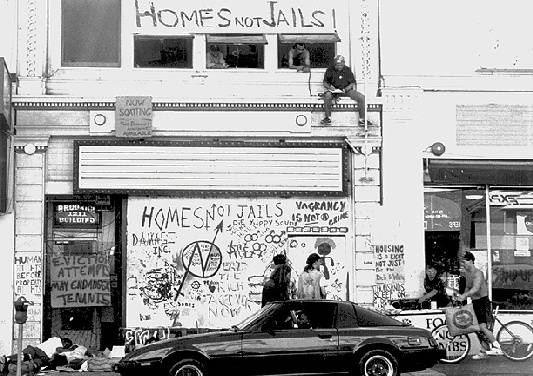 The twin defeats of vacancy control and Agnos forced tenant activists to re-examine their strategies, tactics, and their movement. A consensus was reached that several years of exclusive focus on vacancy control had drained organizational energies and deterred the necessary infusion of new activists. A movement arising out of an urban crisis political analysis had narrowed its focus to rent control, and then to one specific reform--vacancy control. For several years, people interested in working on tenants' issues other than vacancy control simply had no place to go.

Activists also recognized that the election results showed the weakness of the tenants' strategy of seeking to strengthen rent control by electing presumably pro-tenant politicians. Any significant rent control reform passed by the Board of Supervisors and signed by the mayor would always be subject to a popular vote; tenants had to focus on strengthening their own electoral base, not the politicians'.

With Agnos and vacancy control no longer controlling the tenants' agenda, the opportunity emerged for a new approach. A series of agenda-setting neighborhood conventions were scheduled in order to bring new ideas and activists into the tenant movement. The strategy: grassroots tenants rather than leaders would develop an agenda and recreate the broad-based, participatory focus of the movement's origins.

Each neighborhood convention was charged with selecting two priority issues for discussion at a citywide tenant summit. The summit would decide if tenants should go forward with creating ballot initiatives for the November 1992 elections, and, if so, what the measures should include. A ballot initiative would break the movement's excessive and ultimately unproductive reliance on the legislative process and politicians to achieve results. It would also put the movement back into the tenant movement and allow tenants themselves to frame their agendas rather than force them to support measures watered down by their politician allies.

The initiative strategy had its detractors. It was argued that since the narrow loss of Proposition U in 1978, four subsequent rent control initiatives had suffered landslide defeats. Some felt that tenants should lay low after vacancy control's 1991 defeat, and that a major setback in 1992 would destroy what was left of the movement's political credibility. Critics of the initiative strategy saw no prospect of tenants overcoming yet another high-budget landlord opposition campaign; their analysis failed to understand that the 1992 initiative would not be framed as a standard landlord-tenant battle, but as a broad-based campaign for economic fairness.

The ballot measure that emerged from the 1992 convention process would cut the automatic allowable rent increase in half, from 4% a year to 60% of inflation, which amounted to about 2%. The tenant movement's decade-long rent control focus was cast aside and replaced with an updated urban crisis analysis: tenants were victims of a local version of Reagan-Bush trickle-down economics. The Clinton-Gore presidential ticket made economic unfairness a central theme in 1992, and San Francisco's tenant movement hitched its initiative, Proposition H, to this nationwide theme.

The reintroduction of a class analysis into tenant politics enabled the movement to reconnect with other victims of top-down economic policies. The Proposition H campaign identified itself as a strategy for helping low-income children, maintaining the well-being of people with AIDS, as a means of keeping seniors in their longtime homes, and as a means of preserving the city's racial and ethnic diversity. Liberal homeowners, who are the swing votes in San Francisco tenant ballot measures, finally had an initiative they could identify with. The reconnection of the tenant movement to broader progressive constituencies was essential for Proposition H to prevail.

Despite impressive endorsements from new constituencies, highly effective grassroots literature distribution and the framing of the campaign as a referendum on Reaganomics, few experts thought Proposition H would prevail. No on H billboards and bus shelter signs surrounded the city, and landlords outspent tenants $300,000 to $25,000. The alternative weeklies endorsed Proposition H, but provided little coverage and saw the campaign backers as hardworking but doomed to defeat.

Proposition H backers assumed was that its appeal to the direct economic self-interest of voters would overcome the opposition's scare tactics. On election night, the assumption proved correct. Proposition H prevailed 53-47, and ran over 10 points ahead of prior tenant measures in the city's swing precincts. Since Proposition H took effect in December 1992, annual rent increases have been reduced from 4% to 1.9, 1.3, 1.1, and 1.0%. The revived tenant movement created a multimillion-dollar transfer of wealth from landlords to tenants.

The Proposition H campaign also accomplished its goal of creating new tenant leadership. Chief among them was Ted Gullicksen of the San Francisco Tenants Union, who revived activism in what had become primarily a tenants' counseling organization. Gullicksen's commitment to aggressive, class-conscious politics helped lead the movement back to its urban crisis roots. Gullicksen's involvement with Homes Not Jails, a squatters' group, also fostered the reconnection between tenants' organizations and young, more militant activists.

After Proposition H's victory, Gullicksen looked to the November 1994 ballot to remedy San Francisco rent control's biggest loophole: the exemption of owner-occupied buildings of four units or less. San Francisco's large supply of restored Victorian fourplexes and duplexes had long been attractive to both legitimate owner-occupants and profit-seeking speculators. The latter group could move a 25% owner or an owner's relatives into a small building and then exempt the remaining tenants from rent control. While many felt that attacking a loophole previously benefiting the popular "Mom and Pop" landlords could never prevail, Gullicksen argued that an initiative based on Proposition H's economic fairness rationale could win. He was right. In a victory as surprising as Proposition H, Gullicksen's Proposition I won narrowly in the November 1994 election. Landlords who raised $1.1 million to defeat vacancy control and $300,000 to kill Proposition H could only raise $80,000 against Proposition I (the large landlords already covered by rent control were not affected by Proposition I, and some felt they would be helped by subjecting sympathetic small landlords to the afflictions of rent regulation).

Thus, three years after the defeat of vacancy control and the election of a pro-landlord mayor, the city's tenant movement won the two biggest victories of its history. Success was achieved by ignoring the legislative process and by tenants, not politicians, shaping their agenda. Many activists wondered whether a strategy born from necessity (i.e., a mayor that would veto any pro-tenant legislation made initiatives the only option) would continue in a different political environment. The 1995 election of the self-professed pro-tenant Willie Brown as mayor soon answered this question.

During his thirty-year political career, San Francisco Mayor (and former California Assembly Speaker) Willie Brown was hardly an ally of tenants. This was true even when Brown's Assembly district was heavily tenant; Brown's only involvement in the tenant struggles of 19771995 was on the side of landlords opposing vacancy control.

Brown's campaign for mayor aimed to compensate for his dubious record by actively courting the tenant vote. He acknowledged his past shortcomings and attributed them to his focus on state rather than local politics. To prove his commitment, Brown endorsed and mailed to voters a Tenants' Bill of Rights drafted by tenant advocates. The Bill of Rights provided specific commitments on virtually every item tenants sought. When Brown was challenged in a mayoral debate about his allegiances, he insisted he was for tenants. Brown split the tenant vote with a pro-tenant rival in the general election and had overwhelming support in his runoff against the landlord-backed incumbent. When Brown took office in January 1996, tenants felt they had a mayor who recognized the political, if not perhaps the equitable, value of supporting tenants' rights. Because Brown had adopted the tenants' agenda for 1996, tenant activists focused on enacting their platform. Brown proved quite willing to meet with tenants and consistently expressed support for the cause. When the mayor appointed a Rent Board sympathetic to tenants, activists were particularly encouraged.

Unfortunately, Brown's support for tenants quickly waned. The first item on the tenants' agenda, a measure that would reduce illegal owner move-in evictions, languished in committee at the Board of Supervisors. Brown had advised tenants to use a close political ally and appointee as the measure's sponsor, but he failed to intervene when the ally made a deal with landlords to delay the measure. Unwilling to repeat their experiences with former Mayor Agnos, tenant activists demanded that Brown use his admitted control over the board to promptly pass the measure. After agreeing to ensure passage, Brown subsequently flip-flopped and arranged a further delay. When the eviction-protection measure finally reached the Board in December 1996, Brown's two appointees cast the deciding votes to kill the legislation. As tenant leader Ted Gullicksen told the San Francisco Chronicle, Willie Brown "just led us down the road to slaughter."

Brown's abandonment of the tenant cause corresponded with the onset of a new wave of skyrocketing residential rents and property values. Fueled by the economic boom in neighboring Silicon Valley, San Francisco rents climbed 37 percent from February 1996 to February 1997. While existing tenants remained protected by rent control, average monthly rents on vacant apartments rose to $1,233.00 during this period, and to $1,724.00 for two-bedroom units. The steep rises showed no signs of abating through the end of the year.

Owner-occupancy evictions of seniors and other tenants living with below-market rents doubled in the year following Brown and the Board's rejection of legislative protection. As low-income people are forced out of the city, with the middle class soon to follow, the city's elected officials continue to maintain a "Don't Worry, Be Happy" attitude.

As the San Francisco tenant movement moves through its third decade, it remains the city's leading opposition to the final transformation of an economically diverse, primarily working-class town into a city for tourists and the economic elite. The median income for a single person in 1997 had already reached $45,000, and average single-family home prices exceeded $300,000.

Everyone concerned with reclaiming San Francisco has a stake in stemming this steadily upward altering of the city's economic base.