Difference between revisions of "Sudsofloppen: Consciousness-Raising and the Small Group as Free Space" 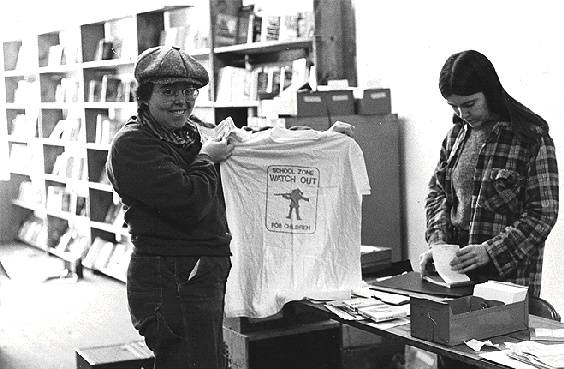 Wary of the factional struggles engulfing the New Left in the late 1960s, the women of Sudsofloppen chose a "nonsensical" name because "no notion of who or what we were could be derived from the name separate from the work and ideas we produced."1 The conference called in January 1969 by Sudsofloppen facilitated communication between women's liberation groups in the Bay Area, but it also led to tension within Sudsofloppen over how their group should relate to the larger movement. The women undertook a systematic effort to clarify the function and needs of the group, a task which culminated in the writing of the Sudsofloppen Paper in April.

The women committed to offering each other a "free space" for a few hours each week and characterized the group "as a place in which to think: to think about our lives, our society and our potential for being creative individuals and for building a women's movement."2 Essentially, Sudsofloppen defined itself as a consciousness-raising group devoted to sharing and analyzing the experiences of its members and building feminist theory from that analysis. The group proceeded to develop guidelines and structures for a model of consciousness-raising. Just as the small group became the definitive organization of women's liberation, consciousness-raising was the best known of its innovations. The process touched people across the country and drew a diversity of women into the movement.

In her essay Free Space, Pam Allen of Sudsofloppen identified four processes for developing a theory from personal experience: opening up, sharing, analyzing, and abstracting. She wrote that "the intention here is to arrive at an understanding of the social conditions of women by pooling descriptions of the forms oppression has taken in each individual's life." The close linkage of theory and experience also served to connect the liberation of the individual with the liberation of the society, the personal with the political. Allen referred to the merging of the personal and the political, concluding that "personal liberation will happen simultaneously with the changing of society, not independently."3 The group as a whole reached similar conclusions in the Sudsofloppen Paper:

The revolution with which the group is related is the revolution that is happening in the lives of the members of the group. The basic changes that are occurring [sic] in self-respect and self-conception are the most revolutionary changes that women can go through.4

In Sudsofloppen, the women limited the function of the group by declaring that it was not an action organization, but they also saw themselves as having a responsibility to build a political movement through involvement in other women's liberation activities. The members, most of whom had long-standing connections to various left movements, recognized the political implications of the personal changes they were undergoing:

This group has had a radicalizing effect on us. Now we understand in our gut something we used to give only lip service to: that there is no personal solution to being a woman in this society. We have realized that if we do not work to change the society it will in the end destroy us. . . . And so the group becomes an essential unit in our fight to create alternatives.5

Small groups such as Sudsofloppen represented the majority of the movement institutions created to provide women with a vehicle for personal and political growth. The movement in San Francisco reflected the struggles of Sudsofloppen and other groups to reconcile the movement and the group, political organizing vs. free space.

Pam Allen and the women of Sudsofloppen were exceedingly aware of the organizational issues underlying their chosen group structure. They clearly delineated the role the group would play in their lives and in their participation in the movement, and they did not attempt to make the small group fulfill a function, such as large-scale political action, for which it was unsuited. Although Sudsofloppen was part of a larger movement with broad, revolutionary goals, its members believed that "the small group is neither an action-oriented political group in and of itself nor is it an alternative family unit. Rather, this is where ideology can develop."6