Sedges have edges,
Rushes are round.
Grasses are jointed,
Where willows abound…

This lovely little mnemonic is scribbled in the fly leaf of An Island Called California, a book written by Elna Bakker that once belonged to my sister Emily. 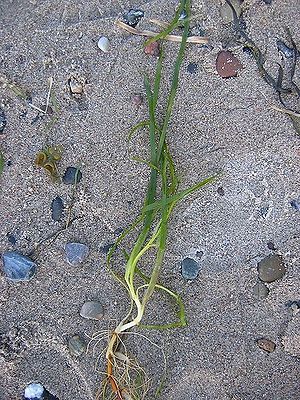 Zostera Marina--common eelgrass; photo: wikimedia commons
It’s a guide to California’s ecological habitats. California’s native eel grass, Zostera marina, appears in the third chapter which describes salt marshes. Bakker uses an evolutionary perspective to structure the book: she starts describing the state’s 20 or so different habitats from within the ocean and moves upland from there.

Eel grass is picky about its environment. It grows underwater and must be submerged at all times, but it needs access to the sun to photosynthesize and so the water must be shallow and clear for the grass to thrive. Hydraulic mining during the Gold Rush dumped 1.5 billion cubic yards of pulverized Sierra batholith into the bay. Like separated lovers, the grass and the sun couldn’t see each other through the haze of the suspended matter, which ended the relationship. Was there a mass die-off? It certainly wasn’t captured in any scientific observations or surveys (there had only been one survey of the vegetation of the bay done in the 1920s.) The Bay wasn’t scrutinized as a living organism for its health until after 1965. So the historic locations and extent of the eel grass beds aren’t known with any precision until late in the 20th century.

It’s enough to say that at one time eel grass beds were commonplace and now they are not. There were probably beds that grew around the margins of the bay starting in the San Pablo bay, continuing into the central Bay, and growing down inside the southern end.

Eel grass might not have been around much in the 20th century, but with the advent of the 21st, that changed. In 1987, scientists surveying the bay found 316 acres of eel grass. Before then it was thought to be rare; after this discovery, bay scientists started taking note of what the eel grass was doing (growing mostly) unassisted and unaided. The number of eel grass beds rose with subsequent surveys. Since the plant’s spirit seemed to be willing (and also because the bay is much cleaner) major restoration projects were initiated by a host of public and private agencies with the hopes of bringing back the historic eel grass beds of San Francisco Bay, 23,440 underwater acres if the restoration project works. 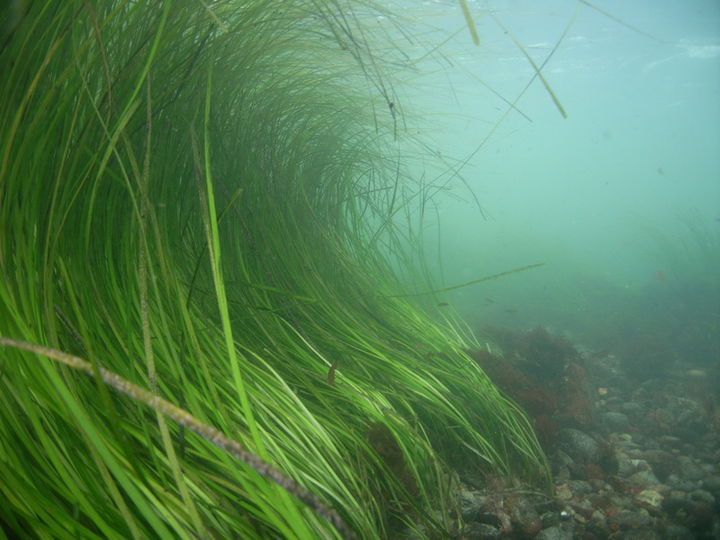 Eel grass affixes itself to the bay floor by means of a rhizomatous network. The rhizomes produce roots that shoot horizontally through the mud, which anchors the plant. Mud and sediment cluster around the roots. This rooting is a mighty act of creation, lengthy and— in contrast to the fabled seven-day creation of the earth— distinctly non-impetuous. Eel grass works in long increments of time to build that most basic locale: the bottom of the bay, unseen by most humans. Thousands of geologic years yawned between each other as the eel grass beds grew thickly and pushed back against the current, forcing the water to slow down.

“Water is lazy,” says my sister Emily. When the water slows, it drops what it’s carrying, which is called silt: mud and clay from the eroded granite of Sierra riverbeds to the alluvial soil of the Central Valley. This interaction between the water and the grass builds the bay from the bottom up (an encouraging image for activists of all persuasions, surely). And the bottom is where things live, and where they slowly navigate the terrain that makes their home. The soft bottom of the bay is a place to crawl, or to a make a bed to burrow into, for native and non-native species alike. Both use the mud of the bay floor to crawl, to nest, to siphon and to prey. Eelgrass beds build structure (commonly called habitat) within an otherwise undefined space.

Habitat, in turn, builds institutions: cohorts of invertebrates, fish and birds that consort and contend with each other within the structure of blade, bed and water.

The margin of the bay is a popular place for institution-building. The institutions built by eel grass gave way to the small fishing industries of the late 19th century that lined the bay from China Camp to Hunter Point. Trawling, dredging and boating destroyed the beds. And then other major industrial endeavors moved in, namely the wartime shipbuilding industry that brought people and machinery to the Bay Area in WWII in the waters where eel grass grew. Along the shores of Sausalito, and Points Richmond and Molate, 3,000,000 cubic yards of bay mud got ripped out so that Marinship Corporation, owned by the W.A. Bechtel Company, might build 93 enormous ships.

A lengthy aside: union films from this period of fast and furious shipbuilding, wishing to encourage union efforts, were not shy about showing the consequences of non-unionized labor: the traumatized bodies of the shipbuilders. In the film Golden Lands, Working Hands, a shipbuilder flexes his knee, moving the remnant stub of his lower leg as he prepares to be fitted for a prosthetic limb at the doctor’s office. Another man shows the camera his hand. Most of his fingers are missing. Shipbuilding was good for unionized labor, occasionally catastrophic for the human body and absolutely merciless to estuarine habit. The blades of the grass and the fingers, hands and legs of shipbuilders went missing in the same space, the margins of the bay.

Scientists are fond of comparing estuaries to nurseries, an appropriate metaphor for the quiet, protected waters of an estuary. Adult fish, like the Pacific herring, enter the estuary and make a beeline for the waving blades of eel grass (if any are around.) The females attach their eggs to the grass, the males release milt, and the beds become incubators, literally, as the herring larvae subsist on their yolk sacs and continue to grow. They hatch in two to three weeks.

But the relative protection of the estuary doesn’t create a absolute sanctuary: the young of any avian, mammalian or epifaunal species will always be at risk from something bigger.

The reproductive cycle of the Pacific herring attracts other animals that like to eat the Pacific herring and their young. Gulls, for instance, which are notoriously rapacious birds, feed directly on the tiny eggs. Diving ducks eat them, too. So do Surf scoters. So do some invertebrates like Clapper Hydromedusa. Or crabs. Or sturgeon, smelt, and juvenile salmonids. Brant Geese eat the grass itself, ripping it up in huge chunks. “Life flows so rapidly into life,” Loren Eisley once observed in astonishment. Death pursues life with the same avidity. Eel grass beds are nurseries for some animals and a game preserve for others. What is the difference between taking shelter and hiding? In an estuary, the line is very thin. 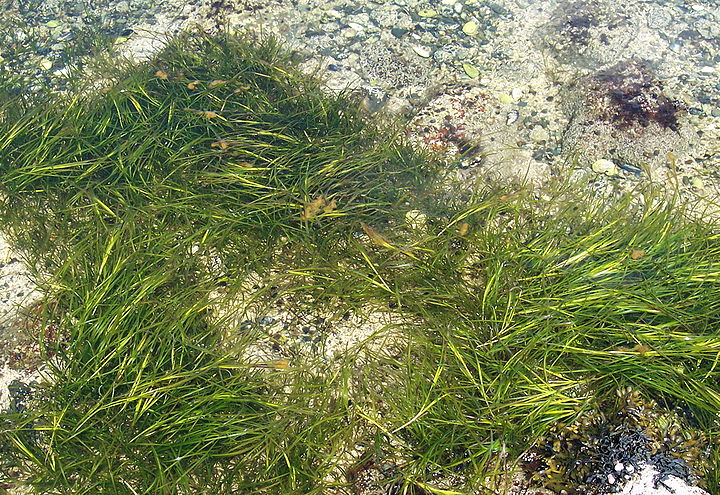 The story of the eel grass’s comeback is the story of the bay. If you improve water quality and stop industrial and urban development from infringing on the sub-tidal bay lands, history will repeat itself. The eel grass beds came back with little direct support and the project to restore them has, so far, has been promising. “We’re still learning,” said Marilyn Latta, Project manager for the San Francisco Bay Subtidal Habitat Goals Project, the lead agency involved in the restoration effort. “The project is in the pilot stage, but we’ve seen good success at a variety of sites, particularly at Point Molate. And we’ve just started restoration efforts on the San Rafael shoreline and have seen good results there, too.”

The pastoral image of acres of waving eel grass is echoed in other endangered ecological systems in the state of California. Grass is literally underfoot, always getting in the way of other, bigger things: ships. Or cows. The largest contiguous grassland in the state, the Great Valley Grassland, covers 2,826 acres outside the small town of Gustine. This parcel is a remnant of an ecosystem that stretched throughout the Central Valley before the arrival of Europeans.

Then, native bunchgrasses and fescue grew throughout the Central Valley. This changed with the onset of pasturage economies: the native grass was replaced by pasturage that was more nutritious for cattle, and now only a few parcels of land with any native assemblages remain. Eel grass has one thing in its favor: it isn’t fighting off any non-native variant of itself. The native sister grass of eel grass, Spartina foliosa, must contend with Spartina alterniflora, an introduced grass from the East Coast which has dominated the native Spartina ecology by means of producing a hybridized variant, thus delivering a one-two punch to that system. So far, eel grass has held its own against outsiders.

Eel grass isn’t rare. It is simply absent. If the readers of this post want to see eel grass, consider visiting Tomales Bay. There, you can rent a kayak and explore one of the most pristine bays in California. Near the rocky edge, the eel grass is visible, its blades flowing sinuously in the water. It isn’t hard to see the current running through the blades as a submerged prairie, with the wind whipping over the plains. The grass is richly green and very lovely.