Difference between revisions of "Sargent Johnson: The "New Negro" Artist" 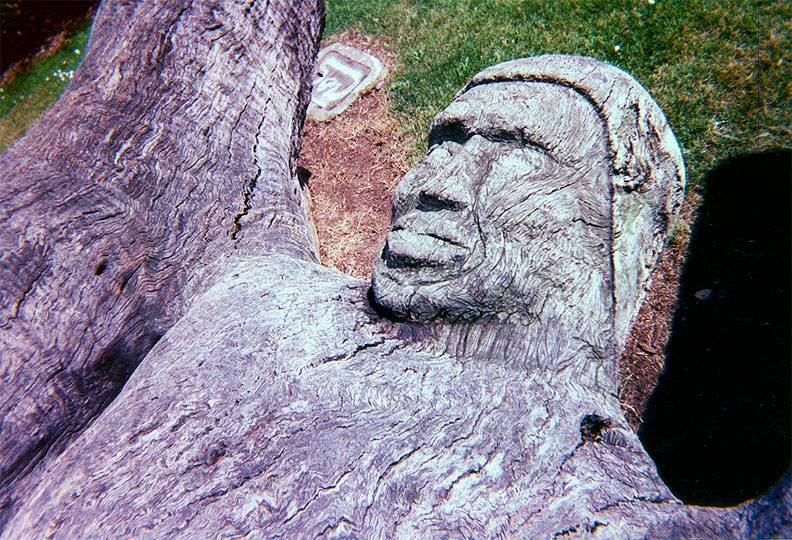 Johnson's log sculpture was installed at Golden Gate and Webster Street in the Fillmore District, but has been removed to an unknown location.

There were many personal as well as philosophical influences on Johnson's art and aesthetic view. Commentators often note the multicultural aspects of his art, but they have little to say regarding the possible influence of his mixed-race family background, or his multicultural experience in San Francisco. Alain Locke's classic anthology, The New Negro, is often cited as a major philosophical influence on Johnson's view of African-American art, yet many of the details of Locke's view crucial to fully understanding the place of African art and Southern black folk culture in Johnson's practice are ignored (Locke 1925).

In addition to Johnson's African-inspired work, which focuses on a rather tenuous conception of a pure American Negro, Locke's teachings regarding African-American art also accommodated the mixed-race image of African-Americans Johnson sometimes constructed (perhaps inadvertently) on the model of a Third World hybrid. Johnson's multicultural orientation was in keeping with Locke's general view of the relation between African-American art and mainstream American art, as well as with some of his more specific claims regarding the role of the African-American artist in America's "cultural democracy." Indeed the influence of Asian and Mexican art, quite prominent in Johnson's large scale public art, never detracted from his desire to produce the African-inspired images he reserved mostly for galleries, collectors and museum exhibitions.

In many respects Johnson's career provides a paradigm of Locke's "New Negro" artist, whose work would display elements that were racial, national and universal. Locke outlined a two-fold cultural strategy: a vibrant race tradition in art will contribute to American art and, in turn, this achievement will help bring about social equality. One of the writers Locke had mentored, Langston Hughes, deemed the Harlem Renaissance movement a failure because it was motivated by a fantasy that the race problem could be solved through art (Hughes 1940). Hughes rightly questioned whether the contributions of an elite group of black intellectuals to American culture would bring about social change for the masses of African Americans. Johnson's art had very little impact on segregationist policies, yet the eventual incorporation of his Negro art into mainstream American art fulfilled the aesthetic mission Locke had set for African-American artists in 1925.

More than any of the other Renaissance artists, including Locke's protege, Aaron Douglass, Johnson epitomized Locke's teachings regarding aesthetics and black consciousness in art. Locke was well-known for his denunciation of propagandistic art. Johnson shared Locke's aversion to the social realism of other so-called New Deal black artists such as Jacob Lawrence, Elizabeth Catlett and Charles White. Unlike these latter artists, the black consciousness displayed in his work was not meant to disturb status quo racial inequality. He is reported to have remarked that working people are sure they don't look as awkward, as earthy, and as unbeautiful as that (Arvey 1939). This apolitical aesthetic stance, one of the problematic aspects of Locke's philosophy of art, served Johnson well. His highly acclaimed Negro art peacefully co-existed with widespread racial discrimination against black San Franciscans in the 20s and 30s. When we consider the fact that, despite the influence of Diego Rivera and the Mexican muralists on his art, Johnson chose not to engage in social commentary for ostensibly aesthetic reasons, we must wonder whether his success as a black artist in San Francisco was predicated on his taking a strong position against propaganda in art.

The only surviving statement of Johnson's aesthetic view seems to be his often quoted remarks in a San Francisco Chronicle interview he gave in 1935. In what appears to be a series of highly edited quotations Johnson distinguished between the "culturally mixed Negro of the cities" and the "more primitive slave type" and insisted that Negro art is devoted to a study of the latter as representatives of the "pure American Negro." He agreed with Locke regarding the need for a group conscious art and with Locke's view that the African-American artist should turn to the American South to study his cultural roots, rather than to Europe to imitate the European masters. Some of his remarks clearly indicate that he remained committed to expressing a strong sense of racial pride in his art long after the official demise of the Renaissance movement. In a declaration that has been compared with Langston Hughes's famous manifesto, "The Negro Artist and the Racial Mountain," Johnson asserted, "I am concerned with, aiming to show the natural beauty and dignity in that characteristic lip, that characteristic hair, bearing and manner. And I wish to show that beauty not so much to the white man as to the Negro himself." When we associate these remarks with the voice of a visibly mixed-race black man living in San Francisco in the mid-thirties other readings are suggested. Why would a person of mixed-race ancestry insist that, of all things, the "pure" African American be represented? Perhaps Johnson's preference for the "pure" Negro of the South can be understood as a criticism of black San Franciscans and their aesthetic values, for his claim to want to reveal a black aesthetic to the African American himself ends with the added comment "And this is not so easily accomplished." He may have realized that his task would be especially difficult to accomplish in San Francisco. With very few Southern black migrants in the bay area in the mid-thirties, it was quite likely that his use of images of black Southerners to represent the race would fail to be appreciated by San Francisco's more status-conscious black urbanites.

It is worth noting that Johnson speaks of black Southerners as "primitive" based on his perception that they were not "culturally mixed." His use of "primitive slave type" comes quite close to Locke's notion of "racial types." Johnson further specifies an African identity for this type with the stipulation "as it existed in this country during the period of slave importation."

Following Locke, Johnson advocated the study of Southern black folk culture and African art as sources of inspiration for African-American art. But since Johnson never visited Africa, and only traveled once to New Orleans, his own representations of the "pure Negro" were largely idealized physical features he copied from African Americans he encountered in the bay area (Arvey 1939). This observation is not meant to diminish the critical praise he received for his use of African sources, as demonstrated by his numerous awards. With regard to Johnson's copper masks, for example, commentators have noted that, rather than merely imitate African art, as so many other artists had done, he employed a thorough knowledge of the structural aspects of African art and applied that knowledge to create representations of African-Americans (Porter, 1943; Arvey 1939). The concern Locke often expressed regarding the superficial use of African art by both European and African-American artists did not apply in the case of Johnson.

The fact that Johnson's technique was indebted to Bufano is not sufficient reason to dismiss his art as imitative, or lacking in originality. Even though Johnson's sculpturing technique was acquired from Bufano, the content of his art was considerably different. Bufano's penchant for creating statues of great men contrasts sharply with Johnson's preference for African-American primitive types and ordinary people of all races. With regard to the politics of representing Southern black folk culture, Johnson's practice seems to have been influenced by both Locke and Bufano. Both advocated a return to folk sources, only Locke had mainly ideological concerns in mind, whereas Bufano was more concerned with technical issues pertaining to the use of what he called pure forms in modern art. Johnson followed Bufano's teachings regarding the use of both ancient and modern materials as a matter of technique, but he also wanted to meet Locke's demand for African-American art with a racial content. He accomplished both by using the technique he acquired from Bufano to emphasize universal themes in his WPA projects, while reserving the expression of black consciousness for his pieces geared to collectors.

Johnson's art reflects many Asian-Pacific elements that can be found in the work of other bay area artists including his teacher, Ralph Stackpole. Lizzetta LeFalle-Collins maintains that Johnson's statues of the Incas, which were created for Stackpole's installation at the International Exposition on Treasure Island, represent his attempt to depict the pure Indian (Lefalle-Collins 1996). What might be considered by critics as imitative in Johnson's style, in fact, enabled him to collaborate on public art projects with other bay area artists. LeFalle-Collins notes, for instance, a striking similarity between the divers and swimmers in Johnson's Athletic frieze at Washington High and the swimmers shown standing and diving in Rivera's mural at City College of San Francisco. But to suppose that he was only interested in pre-Columbian art, or contemporary Mexican art, as a marketing-networking strategy would be misleading. It makes more sense to suppose that he actually found a style in the work of Stackpole and Bufano most suitable to expressing a multiracial perspective. Indeed, his own Indian background provided a motive for his interest in the art of the Zapotec. But his interest in Third World cultures was not limited to African and pre-Columbian Indian art, but also included Japanese art. In addition to his ventures to Mexico to learn technique from the Zapotec Indians, he also traveled to Japan to visit Shinto shrines and study Japanese art.