San Quentin Prison: The Origins of the California "Corrections" System 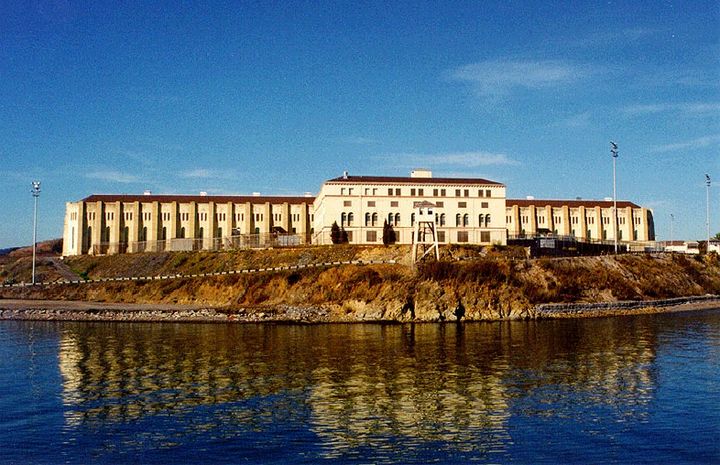 Although there was a prison building boom in the 1990s, the rates of incarceration in California have increased exponentially, and much has been made of the private prison industry at present, the corrections industry in California has always created opportunity for profit. From the private leasing of convicts stored on boats in the San Francisco Bay, to land speculation on the first building site, the state prison institution was a profit-making enterprise from its inception.

Governor John McDougal, who had served as a superintendent of the state prison back east in Indiana, infuriated the members of the Committee of Vigilance when he refused to support their extralegal activities. He insisted that a state prison was in needed to isolate villains from society, and in 1851, legislators showed their agreement by passing an "Act providing for securing of State Prison Convicts." At McDougal's suggestion, the California legislature followed the lead of Kentucky and other frontier states in developing a convict leasing system, whereby a private contractor would provide security and care to the convicts in exchange for the right to sell their labor. This system would later gain widespread use in many states as a response to the abolition of slavery.

The legislature accepted the offer of a one hundred thousand dollar bond from two former Mexican war heroes, Mariano Guadalupe Vallejo and James Madison Estell. After Vallejo's development project (the town of Vallejo) was rejected as a site for both the prison and the state capitol, Vallejo withdrew from public affairs; Estell and now-former Governor McDougal, along with several others, purchased Vallejo's interest in the prisoner lease in 1852. The group of lease owners, led by Estell who retained controlling interest, formed the San Francisco Manufacturing Company to capitalize on prison labor. Even before the selection of a prison site, Estell and company began to accept prisoners from the six county jails throughout the state. Deputies from San Diego, Los Angeles, Santa Barbara, Monterey, San Jose and San Francisco were paid one dollar per mile for their escort services, and soon an abundance of prisoners arrived on the scene.

Estell hired Colonel John Hayes and Major John Caperton (the sheriff and deputy of San Francisco) as subcontractors for the storage of the prisoners. Following the model of the San Francisco ship Euphemia, the local jail ship, Hayes bought the Waban for the State of California and had it towed to Angel Island for easy access for work on the existing quarry there. Though the ship's capacity was perhaps fifty, soon there were three times the number of prisoners on board.

Early in the 1852 session, the California legislature passed an act "to provide for the erection of a State Prison." After the initial rejection of the Vallejo land as the site for the prison, a State Commission was appointed to decide the best prison location. Though Angel Island was considered the most suitable place, it was not available due to federal claims on islands, which also included Alcatraz and Goat Island (Yerba Buena). Punta de Quentin was chosen to be the building site for the new prison.

Quentin or Quintun was a Miwok Indian whose home was in the Petaluma area. He had gained fame in the 1820s for resistance to the Spanish mission at San Rafael. He was finally captured by Lieutenant Ignacio Martinez' men after being trapped on the high point overlooking the bay. After his capture, he was transported to work at Mission Dolores for two years, and then released to the custody of General Vallejo, who retained him as a boatman and interpreter in Indian affairs. In his memoirs, Vallejo explains the origin of the "San" in San Quentin as confusion by the Americans in thinking that all Spanish place names were prefaced by "San."

Following the independence of Mexico from Spain, the Missions were stripped of their land and authority, and became simply churches. Thus in 1834, the land around the San Rafael Mission was parceled out as land grants to various settlers. The Punta de Quentin land grant took in the entire peninsula including part of the valley toward Tamalpais and the salt marshes, making up two square leagues (4,400 acres each). Governor Alvarado deeded it to Juan B. Cooper in 1840. In 1850, three years after the California territory was ceded to the United States by Mexico, Cooper was approached by Benjamin Buckelew, a recent immigrant to the state, and offered $32,500 for the entire land grant. Cooper accepted, and other than a previous lumber contract, Buckalew became the new owner of the peninsula.

Just two years later, in 1852, Buckelew solicited the State Prison Commission to review his land for a prison site. After a tour of San Quentin Point, accompanied by lavish wining and dining, the Commissioners were impressed with the location and bought 20 acres on the south side of the point for the maximum state allotment of $10,000. At about 145 % profit, Ben Buckalew became one of the earliest Marin County land speculators. Though the press charged that the price was outrageous, and that land in such a remote location was not worth $5/acre, the deal went through. Estell, who was by then senator of Napa, quickly visited the site. It was clear that the profit for Estell would be in making bricks from the nearby clay deposits. The San Francisco Manufacturing Company bought 16 acres of land adjacent to the prison land for a steam brickyard. It was purchased from Buckalew for an undisclosed sum.

Horace W. Carpentier, the first mayor of Oakland, was the chair of the State Prison Commission, but had been unable to visit the San Quentin site with the other commissioners. Although he had favored a site in Martinez that was to be donated by the owner, he was overruled by then Governor Bigler, who ordered the prompt purchase of the land from Buckalew. Under James Graham, prison commissioner and also superintendent of public buildings, a design was drawn up for prison construction that would require an outlay of $570,000. Although Carpentier insisted that there had been a $100,000 spending limit voted on in the 1852 Act calling for the securing of convicts, somehow that part had been omitted in the published version of the law. Over Carpentier's protest, Graham proceeded to advertise for contractors bids.

The winning bid came from Ferdinand Vassault, with whom James Estell had close financial ties.Vassault had bid more than $1,000,000 to complete the project. While this was the highest bid among the handful, the lower bidders had withdrawn their offers, most likely receiving compensation for their trouble by Estell and Vassault. After some debate, with Carpentier refusing to agree to the price, the bid was lowered to $725,000 and work was begun on the land.

In the 1853 legislative session, the contract was investigated once again and the Senate (Estell was a senator that year) heard testimony again about the language of the 1852 act. It seemed that most of the solons interviewed remembered that indeed the $100,000 spending limit had been passed; there was the deducton that bribery might have had a part in the written omission of the specification. As a consequence of the hearings, Vassault lost the contract. After the scandal, the legislature authorized funding for only one main cell building, and Estell's company, using bricks prepared by the convict laborers, completed the two story prison building known as "The Stones".