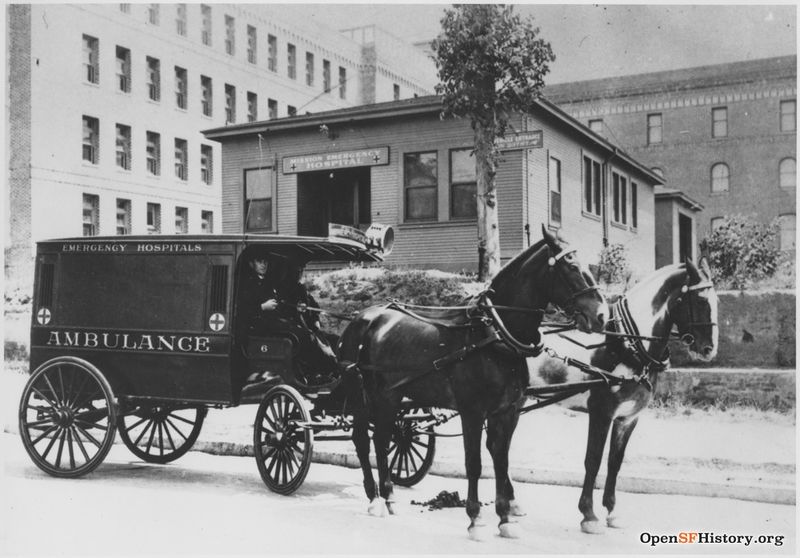 Affordable health care is such a news staple one would assume a story on free emergency services – including ambulances and first aid stations – would be a natural for reporters. Or not. For decades San Francisco had just such a pioneering system yet today it is virtually lost to history, despite the fact it was once admired from coast to coast.

About all that’s left of the once vaunted system is the building near Kezar Stadium that housed the Park Emergency station in Golden Gate Park. The structure, a city landmark, is now home to the city’s park and recreation department’s volunteer program. Looks as though the building’s main claim to fame is going to its role in the “Dirty Harry” movie starring Clint Eastwood. If there’s a lesson here, it’s that there is no such thing as a free ride—not even in an ambulance. There’s always money involved and someone has to pay one way or another. Even “free love” has a price. 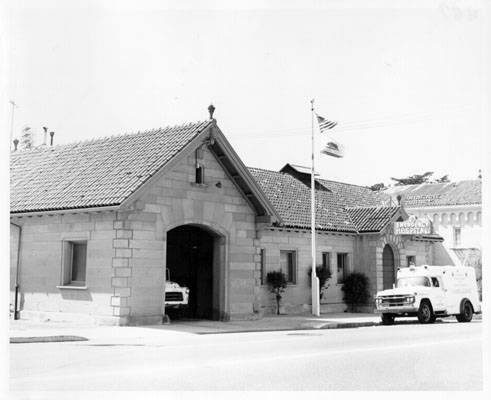 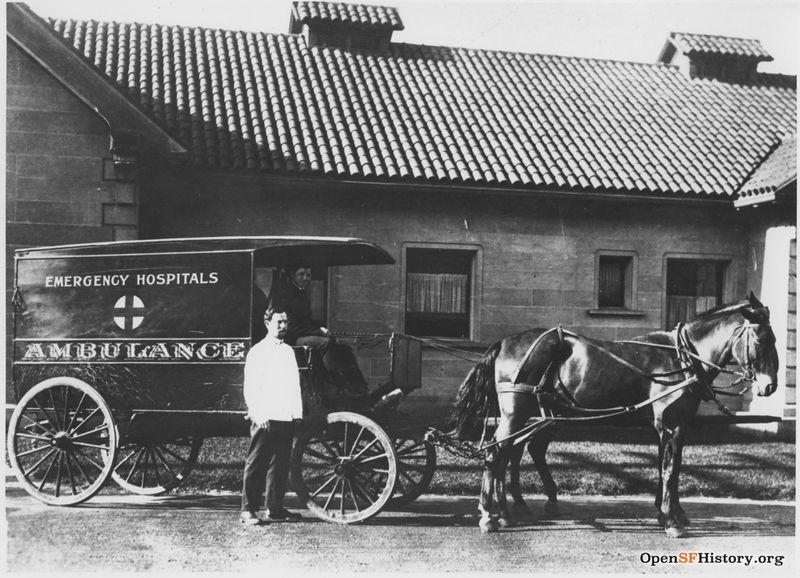 Stanyan near Beulah, c. 1920s. Horse-drawn ambulance with driver and attendant in front of the Park Emergency Hospital.

The one-story Park Emergency Aid Station built in 1902 served in that role until 1978, managing to continue as an ambulance station until 1991. The building is a remnant of a no-charge system that once boasted five emergency aid stations and 14 ambulances, all backed by a major emergency department at San Francisco General Hospital.

The city’s system was so unusual it garnered feature articles in several national publications, including Redbook, Collier’s, and the Saturday Evening Post. United Press International did a feature story that went to virtually all newspapers in the nation. A San Francisco Examiner piece in 1964 claimed the no charge system was the “only one of its kind in the U.S.” The paper estimated the cost at $1 million a year.

As recently as 2009 San Francisco (which President Taft declared in 1911 was “the city that knows how”) was praised in the book “The Ambulance: a History.” Author Ryan Bell dedicated three pages to “San Francisco’s Influential Idea.” Among other things, he said that in 1913 San Francisco had one of the first automobile ambulances in the nation and “never looked back.” By 1932 the emergency medical vehicles were answering five calls a day. Bell pointed out that “the success of the system did not go unremarked on” in other major cities.

The “five calls a day” figure seemed puny next to the 150 daily calls reached in 1978, an estimate given by Dr. F. William Blaisdell in a survey that year for the director of public health. Blaisdell, who had 24 years experience in the city’s emergency system, wrote that the aid stations “managed minor emergencies promptly, efficiently and well.” He figured that up to 80 percent of the station cases involved minor surgical problems such as lacerations and abrasions along with “animal and insect bites, foreign bodies in the eye or upper respiratory problems.’

Blaisdell praised the performance of the ambulance crew consisting of a driver and a steward, noting that both had completed 720 hours of special emergency training. The report added that the Stewart was a licensed nurse, an ex-armed service medic or corpsman or “an experienced ambulance technician with an average tenure on the job of ten years.”

The stations were situated so an ambulance could respond to a call within six minutes, the report said. The major stations included Central Emergency at the Department of Public Health Building on Grove Street in the City Center complex. The original first aid sign still juts from the structure. In addition to the earlier mentioned Park, the other stations included Harbor, Alemany and Mission. The Alemany station at 35 Onandago, long admired for its architecture, served for 27 years as the St. Mary’s Adult Day Health Care Center, which closed in 2011. Mission Emergency now houses a Neuro Research Center at San Francisco General Hospital. 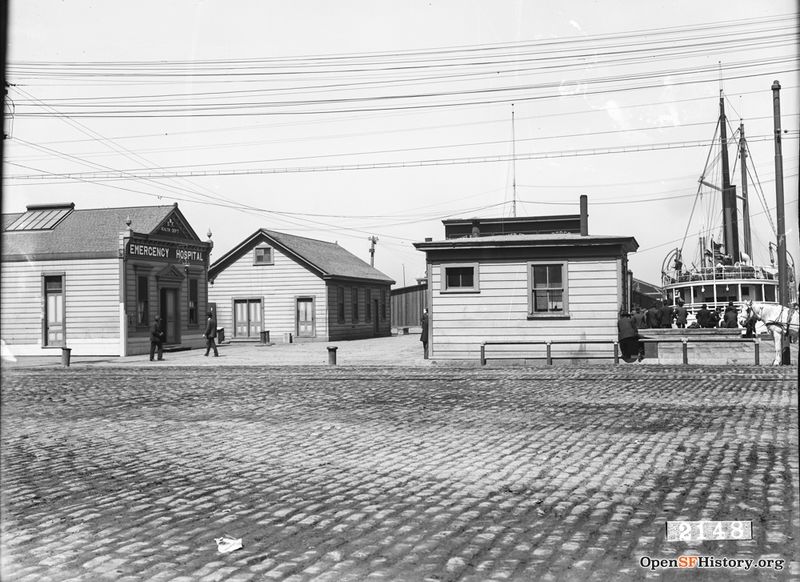 1909 view easterly across East Street (now the Embarcadero) towards the Harbor Emergency Hospital. 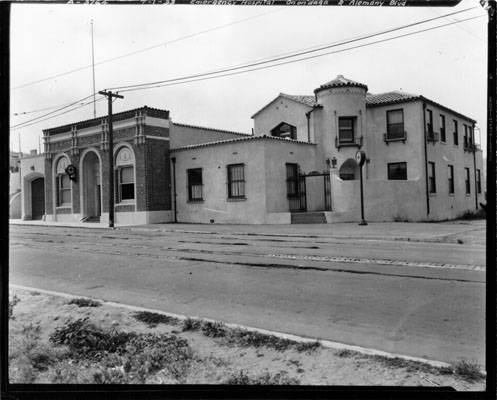 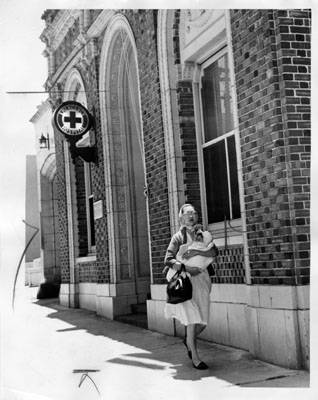 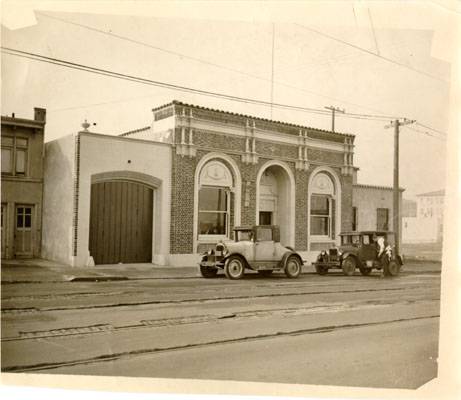 As if seeing the future, the report said that “although the aid stations do not charge for services, it is estimated that somewhere between 70 and 90 percent of the patients utilizing them do have the capability of paying for the services or have third-party health insurance coverage.” The report suggested that the fire department be used as first responders. The city had 44 fire stations and the firefighters could be trained in basic emergency techniques. In 1979 city officials decided to start charging $68 for ambulance service. A year earlier, Park and Harbor were phased out and Central started charging $21 a visit. The fire department took over ambulance duties in 1997. Today the department informs visitors to it website that “although emergency services are performed by the San Francisco Fire Department, billing operations and the collection of fees are performed by a private billing company.” 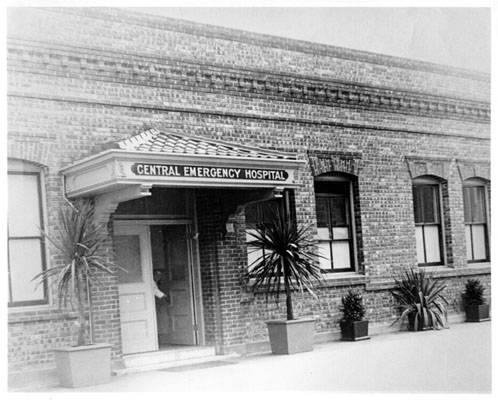 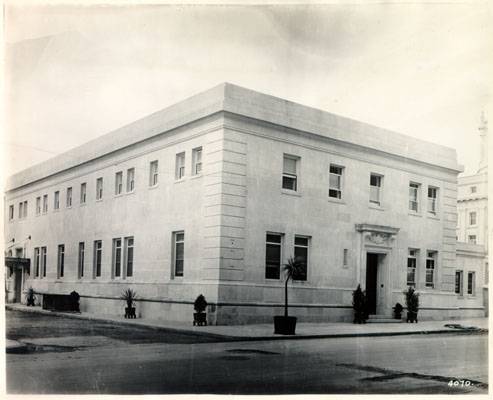 The aid station’s history appears limited to the “Dirty Harry” scene as well as some unflattering ink that flows back to 1967’s “Summer of Love.” An Internet search found little information about the first aid system. There was a great deal on the outstanding trauma center at San Francisco General, but put in “free aid stations” and the user is steered to “free clinics,” which is a completely different matter. Much of the information in this article was provided by the staff of the history room at San Francisco’s main library who came up with a box filled with old documents and newspaper clips.

The aid stations and the ambulance service handled major emergencies before, but the 1967 invasion was something else. The 1906 earthquake of course topped disasters. The service’s history also saw it respond to the VJ Day riot in 1945 in which 11 people died and at least a thousand were injured, drawing praise from the Board of Supervisors who passed a resolution commending the service for taking care of “hundreds of cases in a commendable manner with no publicity and little fanfare.”

The service was sorely tested during the longshoremen's strike of 1934 when two workers were killed and more than 100 people were seriously wounded. Blaisdell, the co-author of “The History of the Surgical Service at San Francisco General Hospital,” wrote that “the ambulances shuttled back and forth from the battleground.”

The system, however, was ill prepared for the thousands of young people from across the nation who descended on San Francisco with flowers in their hair. Health Director Ellis Sox warned that health costs would “skyrocket.”

“This influx brought with it the drug culture, which almost overnight changed the city from a benign place to a city associated with violence,” Blaisdell opined in his book. He noted that in 1959 the emergency services treated 50 shooting or stabbing victims while the figure reached over 350 ten years later. By the 1970s San Francisco, he wrote, “had gone wild” with police officers shot, riots and bombs going off.

One person who had a first-hand look at the ensuing drug cases that centered just a short distance from Park station was Dr. David Smith, who was 28 years old when he opened the Haight-Ashbury free clinic, touted as the first in the nation.

Forty years after the Summer of Love, Smith said in an article in the San Francisco Chronicle that he “took LSD and got involved in the counterculture,” which transformed him from being a laboratory scientist who “viewed human beings as not much different than laboratory rats; something to study and stick drugs in…” In the same article, Smith said there was “no emphasis on public health then,” a statement that might surprise people who remember the free aid stations and the ambulances that raced down city streets.

Smith is the star of “Street Medicine,” a chapter in Salon.com’s founder David Talbot’s book “Season of the Witch,” a work that chronicles San Francisco’s horrific history of the late 1960s and beyond. Talbot has some harsh words for the Park aid station.

“Hippies who fell into the hands of public health doctors and nurses at Park” fared the worse, he wrote. “The hospital staff seemed to take pleasure in tormenting the young. disoriented patients, ignoring them or making them suffer through a long registration process.”

The author doesn’t list a source for the claim, but it wouldn’t take a leap of faith to imagine that the staff of that time felt a “bad trip” meant an auto wreck. [Frankly, Talbot’s book has more bias than a used prom dress. A better read is “The Sixties Unplugged: A Kaleidoscopic History of a Disorderly Decade” by Gerard DeGroot.]

“The city could accommodate a small community of harmless nonconformists congregating around the intersection of Haight and Ashbury,” he wrote. “It could not, however, adjust to hordes of wannabe hippies – penniless runaways armed only with their fantasies.”

Things would change. In 1985 the city’s chief paramedic resigned. According to at least one newspaper account he stepped down because the paramedic division’s problems included drug and alcohol abuse by its personnel. 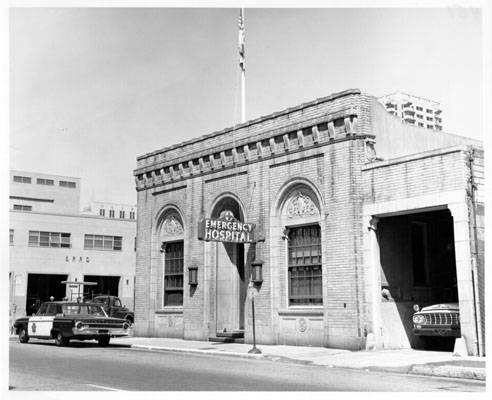 Emergency Hospital at Sacramento and Drumm Streets in downtown, August 15, 1964.

Carl Nolte, who writes the San Francisco Chronicle’s popular “Native Son” column, said that most of the cases handled today are “chronic homeless calls, which cost the city millions of dollars every year. The free ambulance service is as obsolete as those police telephones you see on street corners.” Perhaps what is obsolete is the value system that allowed San Francisco to support the no-charge system. While the old system’s story has for decades been one of San Francisco’s best kept secrets, advances in technology assures that it won’t be buried forever. Versions of this article have appeared on a few websites, bringing responses from older readers who remember being treated at one of the emergency hospitals, which Blaisdell preferred to call “first aid stations,” even though “emergency hospital” was emblazoned on the buildings. They included Paul Rosenberg who said he still has the scar from being treated for a glass cut. Cecilia Nackford said her family members “were regulars” at Alemany. The author of this article remembers his father being treated at the Alemany station after cutting his thumb on a buzz saw.

About that Dirty Harry scene: Park Station is in the movie for only a short while, but it plays a crucial role. The villain is treated for a stab wound in the leg and Dirty Harry Callahan questions the doctor who treated him, coming up with a description of “long blond hair, medium build, about 150 pounds, pale complexion.” The physician also says he thinks the suspect sells programs at Kezar, where the groundskeeper let the bad guy live. After viewing the film recently, I wondered if the information gained was because the suspect had to go through a long registration process. 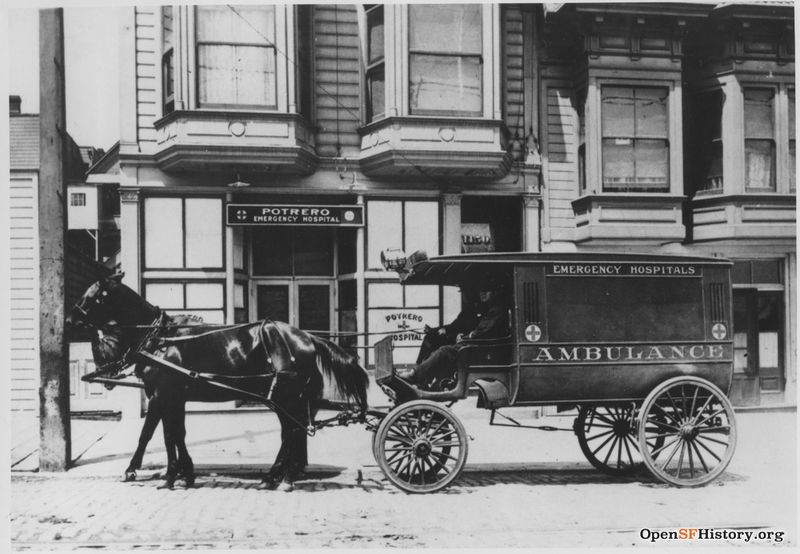 A horse-drawn ambulance with drivers in front of the Potrero Emergency Hospital at 1152 Kentucky Street (now Third Street) in Dogpatch.