Eye-Candy for the Drinking Classes

by Tony Long, originally published in The Semaphore #184, Summer 2008 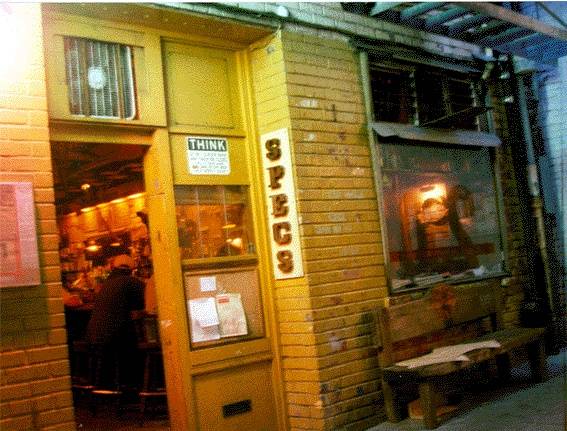 Specs in North Beach has been a speakeasy, a Union social club, a lesbian-bar and a storeroom; it's been Specs since the mid-1960s.

“Five shipwrecked men, visible only because of a single bobbing flashlight, were plucked from the darkened ocean off the Golden Gate early today in a one-in-a-million rescue.”

That’s how Examiner reporter Baron Muller began his story about five San Francisco bartenders who were rescued by the Coast Guard after their 32-foot sloop took on water and sank three miles west of the Golden Gate Bridge back in September 1969. One of those seafaring publicans was bespectacled, 41-year-old Richard Simmons, aka Specs, who had just opened his North Beach bar a year earlier. 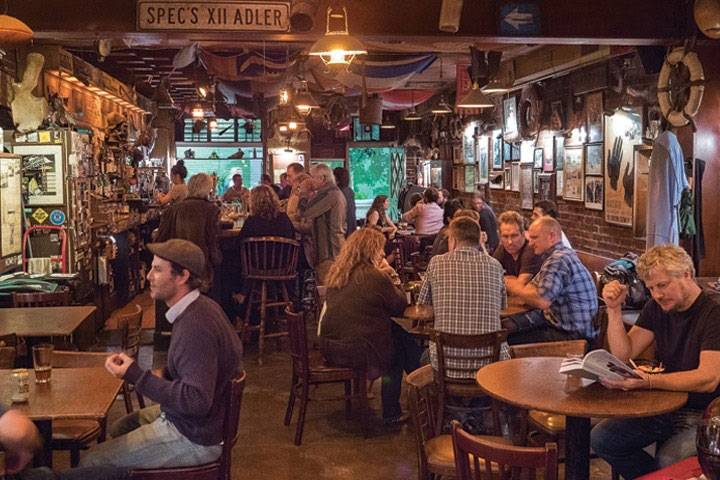 Just think how many livers might have been saved had Specs gone down with the ship. He didn’t, though, and his watering hole in Adler Place has not only survived, but thrived. Specs is one of North Beach’s storied bars, but it’s also one of San Francisco’s oddest little museums, housing a collection of ephemera ranging from maritime artifacts to Wobbly memorabilia to a petrified walrus penis guaranteed to make the manliest of men shrivel by comparison.

Muller’s Examiner account, along with the Chronicle’s version of the rescue and a copy of the Coast Guard report, is part of the collection, preserved under sticky plastic and displayed just past the bar and above the trash can.

More about the museum in a minute, but first the walrus penis. You don’t find one of these in just any bar, at least any bar south of Alaska where, apparently, they’re plentiful. According to one Specs barfly, who was sober enough to sound like a reliable authority, petrified walrus penises wash up regularly on Alaskan beaches. Which makes you wonder what the hell is going on out there in the chilly North Pacific.

Whether our trusty barfly has his story straight or not, that object above the bar—the thing that looks kind of like a child’s femur next to the sign that says “All dogs found on the premises will be turned over to Chef Matsumoto for the Sunday luau”—is indeed a walrus penis.

To know that is to understand that you’ve entered a very special place. 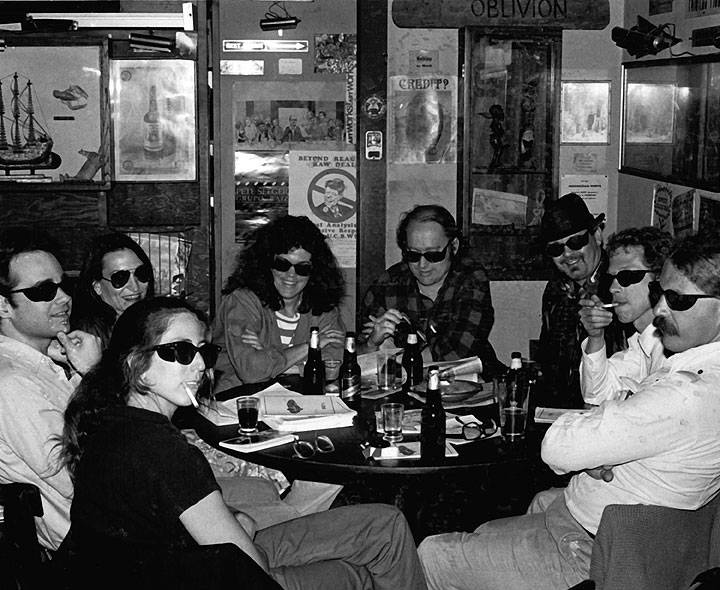 The "dissident office workers of Processed World magazine met regularly at Spec's in 1982-84. Here is one table of them in 1983.

The donor of said artifact, incidentally, is apparently the same guy who sent Specs the Alaskan king crab that is mounted on the wall just past the end of the bar. The story I heard, possibly apocryphal, is that the legs had to be removed in order to fit the crab into the shipping box. One leg was said to have been reattached backwards, although I couldn’t see any evidence of that.

There is no official curator at this museum, so cataloging the inventory is left to the visitor, a tricky proposition when you consider why most people are there in the first place. I’ve been going to Specs for years now and I always seem to find something, somewhere I’ve never seen before. Maybe it’s me; maybe it’s the Scotch.

Anyway, all drinking aside, Specs is an absolute feast for the eyes. The walls are drunk with pictures, posters, notices (“How to Get a Drink” greets the patron to his immediate left upon entering the bar), shipping company pennants and drawings (pencil sketches of neighborhood notables by artist Kristen Wetterhahn, done on cocktail napkins and framed, are particularly good).

Inside glass display cases you’ll find scrimshaw, American Indian artifacts, lapel pins (“Boycott the Examiner” is a personal favorite), political pamphlets, a stuffed mongoose locked in mortal combat with a stuffed cobra, and, across the bar in another case, a stuffed armadillo.

One of the more unusual pieces can be found way in the back, near the piano. That would be a full-sized mummy case, whose face, on closer inspection, is a pretty good likeness of Specs himself. This was not unearthed during some early 20th century Egyptian dig, but rather a gift from Dancer, a former Specs bartender who obviously has some talent as a mummy artisan.

Notice the coin slot in the mummy’s head, and contribute.