by the Point Blank collective, 1975 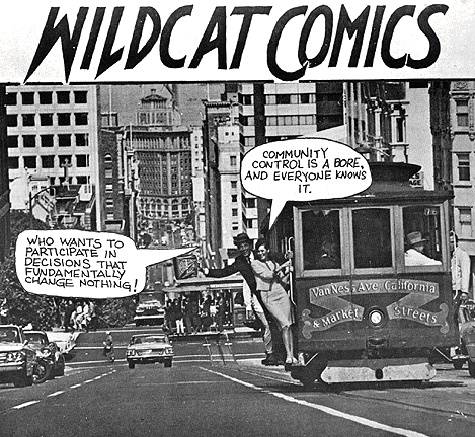 We are all going nowhere. No matter where we travel, our destination seems strangely like our place of departure. Wherever we look, we find various conditions of misery; at home, at work, and in all the places in between, we see the same void, we encounter the same emptiness. Our uneasiness with our daily lives is something we can't avoid--while we may think we're "different" from everybody else, we can't help noticing that everybody looks the same in the crowds on our way to work.

The poverty of urban life is not confined to the slums and ghettoes--it exists everywhere. All of us share a vague feeling that everything that happens is beyond our control. The various occupations that distinguish us--workers, shoppers, students--are only so many roles. We don't choose to live the way we do; it is forced upon us in many subtle (and not so subtle) ways. We don't ride the buses because we want to, but because we have to.

The way we are forced to travel says a lot about the way society functions. Transportation is only a means to an end. This is demonstrated all the time by the vandalism of young school kids. In breaking windows and slashing seats, they have at least exposed the purpose of transport: to herd people from place to place, from home to school or a job and back again. On the buses, we see the same faces every day, but no one ever speaks to each other, except about the most unimportant things--yesterday's sports results, the latest TV programs, elections and so on.

We encounter a real absence of communication here, and our trivial conversations only hide the fact that nothing is ever really said. Every day, we repeat the same gestures endlessly; we climb aboard, deposit our money in the coin-box, and sit down with a newspaper or a book. We try to avoid looking at the other passengers, because we would only recognize our own unhappiness in their blank, featureless stares. We are so aware of our discontent that we have to provide others with an image of happiness. Unable to smile, we wear yellow "smile" buttons on our lapels and say good-bye to each other with the trite "Have a nice day," because we know we never will.

Our own isolation--our own inability to talk to other people--is not the result of a decision we make; it is expected of us. We travel in a hostile world, a world which is designed to keep us apart. Life in the city is not "difficult" simply because there is a high "crime rate," as the newspapers would have us believe: the real crime which is committed against us is the way we are robbed of life daily, in our work and in our free time. Our senses are assaulted by a chant of the dead that comes at us from all sides.

The advertisements are the first things that strike us when we get on the buses. If we look out the windows, we find an even larger graveyard in the shops and billboards. Everything there is to see bears a price tag.

All of this comes as no surprise. We all feel that we've been had somewhere along the line, but if we try and locate the reasons for our dissatisfaction, we come to the disturbing conclusion that they are to be found everywhere. A trip on the bus is just a part of a daily routing that makes up our "lives." The boredom we experience on the buses does not leave us when we arrive at our "destination" -- the next eight hours only offer the same. The true meaning of work can be found in the face of the bus driver, whom we ignore every day. We have nothing to say to him because we know only too well what he goes through.

In various ways, we all express a desire to escape from our situation. After work, we try to get home as quickly as possible and to forget about what we've been through all day by having a few drinks or smoking dope with our friends. We look for someone to talk to in the bars, but after a while we don't even do that much. Our encounters become casual and meaningless; the pleasure we desperately seek is always absent. Our "pursuit of happiness" only deadens the pain without getting rid of it.

In our so-called "leisure," we are not free either. We spend our time like we spend our money, in the pursuit of things, as we buy the latest useless items. We take in the latest film or TV special in order to "relax." But here again, life eludes us--all we see is its shadow. We are always condemned to be passive spectators.

We are prisoners of a time which does not belong to us, but to someone else; the manner in which we spend our days is determined by circumstances we cannot control. The way things are hasn't come about through some sort of "accident," however. Our travel, work, and leisure are all maintained by a system which is based on a division between those who run the machinery and those who are caught up in its workings. This isn't simply a "rat-race" which is a "necessary" part of daily life: the race we are running in is organized for certain people's benefit.

The bosses whom we run into everywhere we go--in the schools, factories, offices, unions, and throughout society--don't just happen to be there; they keep the whole show going. But even though we all know we're being treated like shit, we tend to accept it as inevitable. We postpone our happiness until a distant future, to be reached when we pay off the last mortgage or after we retire. But our "happy tomorrows" either come too late or not at all.

We experience a hundred humiliations every day. Whenever we are told what to do, whenever we pick up a paycheck or a welfare payment, or are insulted by a "superior," we are reminded of our own impotence. We find it hard to suppress our anger, but when we do strike back, it is usually against only on part of our humiliation--we demand higher wages, better working conditions, an end to racial and sexual discrimination, and so on. Even when we manage to win on a particular issue, we find afterwards that things go on much the same as before. After the thousands of partial victories (civil rights, equal pay for equal work, paid health-care plans) we have gained over the years, we become painfully aware that the system can easily absorb any opposition which does no oppose it totally.

Changing all of this--putting an end to our alienation--does not simply consist of taking over a bus, but everything that affects us. To seize control of society is to seize control of our lives. All of us share a common condition of powerlessness, no matter how different our jobs are. However often one may hear of the "silent majority," the majority of people in America belong to a class whose real interests go against the interests of those who rule us. In the offices and factories, in the department stores and shopping centers, workers have had enough of "business as usual." Many of us have begun to express our discontent in actions: from breaking the smallest rule to open disobedience in the form of wildcat strikes and sabotage.

When we realize the depth of our dissatisfaction with the world, we start to see how much really needs to be changed. All the reformists, from the liberals to the New Left, who want to patch up the existing system, are only trying to give us the same crap in a slightly different form. They talk of reforming everything--transportation, work, government--to prevent us from seeing what's really wrong with society. However, the "urban crisis" that every politician and news analyst talks about will only be overcome when it is seen a s a crisis of power--the cities will become "livable" when they become ours.

This doesn't mean some kind of "community control" which would make the Board of Supervisors, the police, the schools, more "responsive" to the "citizens." Instead, it requires the destruction of existing authority and the creation of our own democratic forms of organization: workers' councils in which we control and make decisions on everything that goes on.

It is not just one particular boss that must be gotten rid of; rather, it is the whole idea of bosses that has to be destroyed. Those who speak of revolution and at the same time preach about the Party and "correct leadership" are our enemies. It's no secret that it's as dull in Peking as it is in San Francisco. A genuine revolution does not mean a change of bosses but a real change in the way we live; it must be made for ourselves and not in the name of an external "cause." Such a change cannot be accomplished by simply "dropping out" -- society will only be transformed when we actively confront it.

The tasks that presently face us are complex, but at the same time, the future can be ours if we want it to be. In revealing the true secret of society--the misery of daily life--we have already toppled capitalism's house of cards, the illusions that keep us where we are. The next moves await everyone who wants to start a different game.