Difference between revisions of "SOUTH OF MARKET/SOMA" 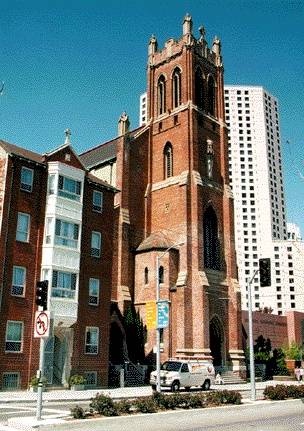 St. Patrick's Catholic Church is one of the last remnants of the working-class community in SOMA from the late 1800s. St. Patrick's was the core of the Irish community in the area, and remained so after most of the Irish moved to the Mission and to suburban communities after 1906. Many of St. Patrick's long standing parishioners supported neighborhood redevelopment plans of South of Market, since they didn't like the "skid row" character that the neighborhood had taken on. However, they wanted to save their historic church. Due to their considerable influence in city politics and the Archdiocese of SF, St. Patrick's was preserved while other homes, inexpensive hotels and businesses were demolished. It is now the only old building left in the area (that has become a tourist site and convention center) and is a national landmark. It has become the parish of choice for San Francisco's downtown and south of Market Filipino community.

Though the influx of artists has sent real-estate prices to rising, the neighborhood as a whole is sinking, slowly but inexorably, into the filthy muck that lies beneath it. From Fifth and Howard Streets south to where 16th Street borders Potrero Hill, all the way to the Bay, SOMA is built atop ten to 60 feet of soft, squishy mud (see Mission Bay). Over the years, some houses have sunk so much that the second floor has become the first, while the first has turned into the basement. (The best place to see the evidence of subsidence is between Fifth and Sixth Streets on Tehama, Clementina, Shipley, and Clara streets, all of which have sunk below the level of the main streets.) 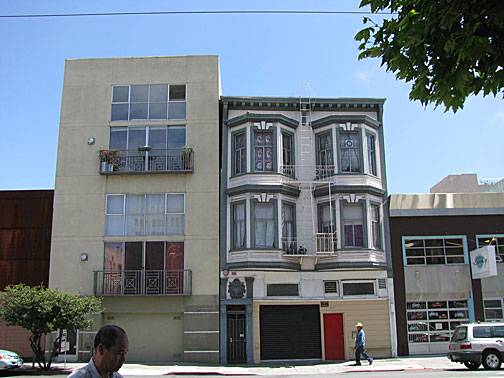 Century-old Victorian slumps away from new condo on Howard near 6th, 2008. 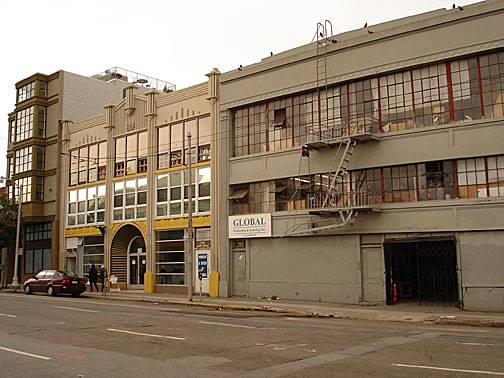 This warehouse (right) on Folsom across from Langton Alley is notably slumping to the right and away from the street.
Photos: Chris Carlsson

Will South of Market eventually be swallowed up by the muck? Probably not. It's only sinking about one or two feet per decade, and the rate seems to be slowing as water is squeezed from the mud, leaving it thicker and less compressible.

Though it isn't going to gobble up the buildings, the hungry mud beneath the SOMA district might destroy the neighborhood in another way. A monster quake could set the mud to shaking like gigantic bowl of jello, causing buildings and bridges to crumble. After the 1906 quake, SOMA was the hardest-hit area in the City. And during the 1989 "World Series Quake," several buildings in the area partially collapsed; only the Marina district, also built on inadequate fill, suffered worse damage. Though only a few people were crushed by the avalanches of brick and mortar, the event provided an ominous foreshadowing of what could happen to SOMA when The Big One hits.