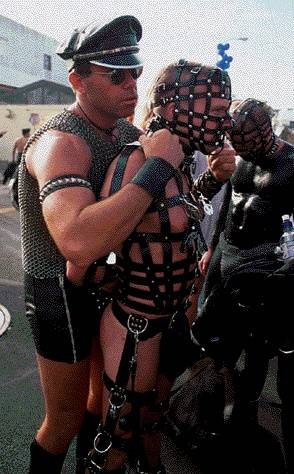 South of Market has been undergoing so much rapid change in recent years that many of its current habitues are unaware of or uneasy about its recent past. The newspapers endlessly repeat a mantra of how brave pioneers -- usually restauranteurs catering to an "upscale" crowd -- have wrested the area away from the "lowlife" elements that once made the area "undesirable." This point of view rests on the assumption that it is "right" and "good" when "disreputable" populations such as gay people, the poor, or people of color are displaced by wealthier, whiter, straighter, more "respectable" folk.

Gay "leathermen" are one of the most visible and least understood of the ostensibly vanishing groups of SOMA aboriginals. Reading about the world of leather in the straight press is a bit like reading the reports about indigenous peoples written by dumfounded missionaries in the heyday of colonialism.

When I see the disappearance of its gay population used an indicator of the South of Market "renaissance," I am reminded of the ways white settlers in North America spoke of the Native Americans they displaced.

The gay male leather presence South of Market has diminished substantially in recent years. But leathermen are still an important population in the area, coexisting uneasily with the new arrivistes. On this occasion of the sixth Folsom Street Fair, they will be out in force. It is appropriate to recall who they are, how they got here, and that they have a legitimate stake in the neighborhood and its future.