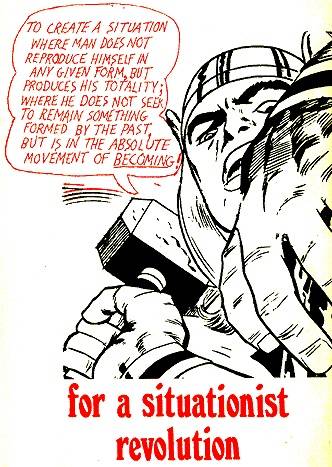 Point Blank! To Create a Situation ...

"Even though the construction of the future and its completion for all times is not our task, what we have to accomplish at this time is all the more clear: relentless criticism of all existing conditions, relentless in the sense that the criticism is not afraid of its findings and just as little afraid of the conflict with the powers that be."

For a few days in June, San Francisco was forced to reveal -- if only for a moment -- its real face. By the removal of certain veils, it was shown to be like any other city -- a place of alienation, of boredom, of misery. In confronting both the powers that be and those who must suffer the consequences of this power with a picture of this alienation, we exposed the actual content of urban "life" in spectacular society and drew attention to the various ways by which the existing order is maintained Our simultaneous assault (through official-looking posters, pamphlets, and coupons) on work, commuting, shopping and welfare, made public what was already secret knowledge: everything stands in the way, everything must be changed.

In asking all the questions about Life which everyone understands but capitalism is afraid to ask (Do You Ever Feel Like Killing Your Boss? or Do You Ever Want To Steal Everything? and Is There Life Before Death?), we unmasked social administration for what it is-the organization of time, space, and people according to the banal requirements of capitalist production. Our critique of human geography was aimed at the major components of everyday life in capitalist society. Far our purposes, the city was viewed in a strategic sense as an integrated system of social, political, and economic hierarchies. By attacking each of these, we emphasized the essential connection which exists between them; work, shopping, and welfare are all aspects of one social process. Our actions, therefore, were not directed at any one symptom of dissatisfaction with society, but rather attempted to indicate the general dissatisfaction with existing conditions which pervades all sectors of the city.

Through the forms in which we presented our critique, we made use of the techniques of conventional public relations. This was done, however, In order to demonstrate precisely what is concealed by spectacular publicity: the social relations upon which all daily activity is based. In this subversion of official language, the weapons of the spectacle (advertising, media, news) turn against it: the mechanisms by which power maintains itself can be used by its enemies for a completely different purpose--the destruction of existing authority. Power can become entrapped by its own falsehood; in appropriating "officiality" for ourselves, we were even able to deceive the deceivers to a certain extent. The police, themselves the most expendable mercenaries of capitalist power, believed we were putting up legitimate posters and released several of us that they had detained. But this attack was not directed simply at the formal political structure of the city; we did not merely intend to "get back at City Hall." Although our "official" posters did sabotage the machinery of government (jamming phone lines, etc.), they were aimed at all the structures, both formal and informal, which dominate our lives.

In their customary fashion, the various forms of bourgeois media have presented a distorted image of what threatens the continued existence of contemporary society. Since they were as incapable as the authorities of understanding what we had done, they were forced to try to "explain" our actions to their audience, and in a few instances they deliberately suppressed any mention of the events. This attitude is hardly surprising, since it is the purpose of media "news" to preserve everything which is not new: as Nixon and Brezhnev consummate their romance in a lover's triangle which includes China, as the Watergate "scandal" continues to occupy the spotlight in a soap opera everybody has long since given up watching, the world-wide movement of opposition to this show, the real news that is being made, is kept; secret. The media tell people their own story of the "events" that occur; in the same manner as police protect private property, the media protect the private, unilateral forms of (non)-communication.

The reaction of the media to what we had done was almost reflexive--at first, they called the whole thing a hoax, a practical joke without apparent motive. After they received our explanation of this "hoax" (the poster entitled The End of San Francisco), they were forced to revise their estimation and take us more seriously. But even then, they purposely avoided mentioning our open statement of the public, collective nature of the project we had begun, attempting to fit us into a predetermined image. While we had previously been depicted as "tongue-in-cheek" conceptual artists in the manner of such cheap stunt-men as Sam's Cafe, we became an almost terrorist group who issued extravagant demands for the establishment of "our" power. The liberal media (KQED-TV) called our effort a "cruel joke against poor people" (it is of course only liberals and other bureaucrats who would presume to "speak for the poor").

None of these distortions is surprising. The immediate sympathetic response we received from many people while we were distributing pamphlets and putting up posters showed that everybody already understood the truth of money, work, shopping, etc. without, any need for the media's interpretation. But in spite of their stupidity, the media did recognize one fact: our opposition to capitalism was fundamentally different from that of all other "leftists" and "revolutionaries". Instead of protesting against a particular set of bosses, we attacked the principle of hierarchy itself. We made it clear that we did not want to reform capitalism, but to destroy it. However, the novelty of our actions means nothing unless others take up where we have left off. To the extent that our actions remain mere objects of discussion, we shall have failed. We do not want to be contemplated by passive admirers: our intention was not to amuse people but to communicate directly to others about our common conditions and our common desires.

Our posters were not as false as the conditions they described. The real hoax was not our subversion of official announcements but the fact that the whole show of spectacular society can continue day after day. If anyone has been had, it is all those who must endure the artificiality imposed by capitalism throughout its cities and everywhere else. These impoverished conditions cannot be concealed--everybody already knows what must be confronted each day. From the crowds rushing onto the buses to the situation at work, everybody remains a stranger to everybody else, a prisoner of a routine.

If our actions showed that it was possible for a handful of people to disrupt this routine for a short time, they also demonstrated the primitive nature of our techniques. We managed to succeed with the limited means that were at our disposal, but it is clear that much more sophisticated methods could produce even more scandalous results. Nonetheless, this project has provided an opening for future activity. We stated in our journal, Point-Blank! No. 1, "It is on the terrain of daily life that the spectacle is most vulnerable," and while our actions have taken the system by surprise, we will be in an even better position to attack it later by applying what we have already learned.

Although we intend to continue our activity, we are not doing so out of some imagined sense of "duty" to everybody "out there." We did not undertake our recent actions on behalf of anyone other than ourselves and our own pleasure--we enjoyed what we did and had fun doing it. We were quite serious when we spoke of our game; unlike the New Left and the militants of all kinds, who can only offer the same old cliches about the "Cause" and the need for leadership, we reject all sacrifice. Our critique of capitalism is at the same time a critique of all false opposition to it--any movement that fails to define itself on its own terms ends up reinforcing the existing show.

The conditions which produced our critique will produce much more radical actions in the future. What we have done is only a beginning, and a real extension of our project will only come about when others develop their own strategies to combat society. Our actions can be improved upon by anybody who shares our desire to change everything; the possibilities for subversion are to be found all over, and it is simply a matter of discovering them and making them a force to be reckoned with. In the impoverished landscape of the city, the only adventure left is the adventure of revolution.

Until people can control their own lives and transform the city into a genuine reflection of themselves, there will always be those who will haunt the spectacle with the specter of its destruction. The construction of the future is everybody's task, and it awaits all those who want to find it. The sympathetic laughter that greeted our posters will soon grow louder; our actions have only given a hint of what is to come.

For us, revolution is not something which will magically "appear" at a given time in the future--the problems our activity has posed are immediate and derive from conditions as they present themselves. In describing the discontent of all those who are forced to conform to society's rules, we have also outlined the nature of the situationist revolutionary project, which involves nothing less than the total transformation of existing social relationships. This project has been previously directed by various historical revolutionary movements, whose experiences have been carefully hidden from public knowledge by the guardians of the old world. The most radical achievement of these movements was the creation of workers' councils--democratic assemblies which organized production and coordinated their activities within large areas. During the Spanish Revolution of 1936, the city of Barcelona was taken over by its inhabitants, who controlled all the necessary industry and kept the city functioning as a revolutionary center. But this example is nothing compared to what could be done now, and since that time, such a minimum task has become even easier to accomplish. The most recent instance of a revolutionary use of the city has been shown by the May, 1968 revolt in France, where workers, young people, and all the others who wanted to change life, seized control of large sections of society for their own purposes. During May, the streets of Paris and other cities became streets of revolution.

Radical violence has not been absent from the streets of America either, and all the reforms that have been implemented over the years have been unable to eliminate it. Everywhere in the United States, people have expressed their discontent with their lives and have begun to fight against their alienation. The possibilities of this revolt are unlimited, and our recent activity has attempted to contribute to its development. However, the real decisions about what we have done are not ours to make; everyone must decide for himself and choose his own course of action. But already flowers of revolt are blooming in the deserts of daily life.