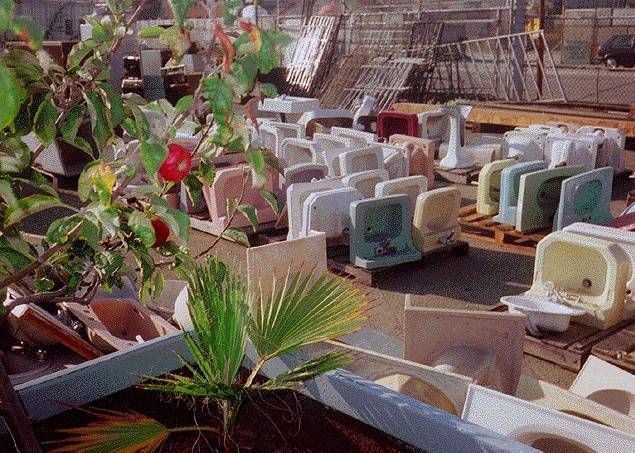 Sinks are among many useful items being recycled through Building REsources

San Francisco Community Recyclers was founded in 1980 in response to two important points in the city's recycling development. First was the growth and maturation of the non-profit community based recycling centers. The second was the emergence of the city recycling program.

Between 1970, when Richmond Environmental Action (REA) was founded, and 1979, there had grown up a dozen or more individual recycling operations ranging from REA with a yard, equipment and staff, to monthly paper drives by churches and scout troops. Haight-Ashbury Neighborhood Council (HANC) Recycling was founded in 1974 and Bernal Recycling in 1977. Together these centers and programs attempted to apply neighborhood solutions to solid waste management but they needed operational support such as trucking, joint marketing and liability insurance.

In an attempt to bring cohesiveness to the recycling groups, activists from all the existing non-profits and city-wide environmental groups formed SFCR. With encouragement and funding from the recently created S.F. Office of Solid Waste Management, the organization incorporated and began to centralize some of the capital-intensive aspects of the non-profits' operations. The State of California provided grants for equipment and the Environmental Protection Agency gave a grant to start up a wine bottle collection program. Early SFCR activities included centralized hauling of the wine bottles and the marketing of aluminum, tin newspaper and other materials for all the non-profit centers.

The City Office of Recycling had been formed in 1979 to plan, coordinate and expand the various activities attempting to reduce the City's waste stream. Activists from the nonprofit recyclers were involved in the effort to create this new city program. Tile Solid Waste Management Program resided under the Chief Administrative Officer, and one of his first actions was to provide SFCR with funding.

In 1984, SFCR expanded its activities to include the first buyback program in San Francisco, a project that was originally called "Many Happy Returns." The centers were sited on Safeway parking lots and bought back newspaper, glass, and aluminum. In time, SFCR came to operate seven centers throughout the city.

As the years passed, operational differences between the original non-profit groups became more pronounced. Some groups emphasized the buyback component, while others stressed the drop off of donated material. The groups also became more involved in their own internal projects. Cooperative marketing of materials became more difficult. Rather than an umbrella organization, SFCR emerged as independent entity, with funding from the City, Owens-Corning Glass, Bay Area Soft Drink Association, and Sunset Scavengers.

In 1987 Assembly Bill 2020 passed in California, setting up a redemption program for beverage containers and a certification system for recycling centers. SFCR's buyback centers became certified by the state. Financial support for SFCR from the beverage container industry dried up as those sources became obliged by the State to support the redemption program. AB 2020 also mandated the proliferation of recycling centers throughout tile state.

At the same time many cities started curbside collection programs, including San Francisco. With greatly increased volumes flooding the market, prices steadily decreased. The recession of the late-1980's together , her with the domestic glut from municipal collection programs had a severe impact on SFCR. Unlike donation drop-off programs, SFCR's buybacks never made enough revenue to cover costs. The three buybacks losing the most money were forced to shut down, and special event pickups and charitable donations were discontinued.

In order to diversify operations and expand into new markets, SFCR investigated different types of ventures, involving the remanufacture of rag-rugs from scrap cloth, and a glass-tile plant. Although feasibility studies and grant proposals were made, the projects were never funded.

The remanufacturing research was useful even though it did not translate into a business opportunity. SFCR's public education mission has always been at the forefront of ongoing activities, in spite of financial setbacks. Over the years there have been a speaker's bureau and outreach to community groups through the special event pickup program. In 1990, to expand recycling education and help fund schools, SFCR conducted "Recycle San Francisco," which linked schools, recycling centers, and corporate sponsorship in a major recycling drive. $14,000 was raised during the 1990-91 school year. The newsletter, Renews, brought information on recycling and source reduction to interested people.

Meanwhile the financial crisis deepened. Two more buyback centers were closed down to reduce losses. The Executive Director spent much more time in fundraising efforts than ever before. The Board of Directors, preoccupied with their own projects and concerns, were either unable or unwilling to form a unified front and so provide the support for tile necessary course adjustments. Aluminum prices continued to drop, and it became more and more difficult to make the biweekly payroll for the staff. By January of 1992 the situation looked desperate. The Executive Director recommended to the Board that the organization be dissolved, its assets liquidated, and the money left after the creditors were paid given to the staff as severance pay.

Then, salvation appeared from an until then unlooked-for source. With the blessing and financial assistance of the City office of Recycling, the Haight-Ashbury Neighborhood Council and Richmond Environmental Action responded to the impending dissolution and reformed SFCR's Board of Directors. Kevin Drew was elected President, and subsequently was named the new Executive Director. Three middle management and administrative positions were eliminated and absorbed by the HANC and REA management. The main yard on Amador Street was closed, as well as office space SFCR once rented. The resulting economics of scale coupled with streamlining of operations proved beneficial for all three organizations. SFCR went from a projected monthly loss of $10,000 to a profit of $1,700. Eight staffers laid off during the reorganization were hired back, and within 3 months raises were given to all the workers.

In the fall of 1992, SFCR held a strategic planning session, facilitated by recycling consultants Gainer and Associates, to obtain a clearer picture of what the future objectives would be. It was decided that some new way to reduce the waste stream in the city should be begun by the end of the year. Several alternatives were looked at long and hard: wooden pallet reuse, plastics remanufacturing, and a used building material exchange, like Urban Ore in Berkeley. It was this last idea that seemed most likely, and Urban Ore was contracted to do a feasibility study.

With its financial house in order now SFCR turned its full attention to the new project. Building REsources took two and a half years to proceed from initial idea to business plan to reality. With the blessing of the City Office of Recycling, the project's grand opening came in the summer of 1995.

Ed Dunne, longtime member of the Haight Ashbury Recycling Center, describes how he got involved, how the center works, and what some of the problems are of solid waste disposal.