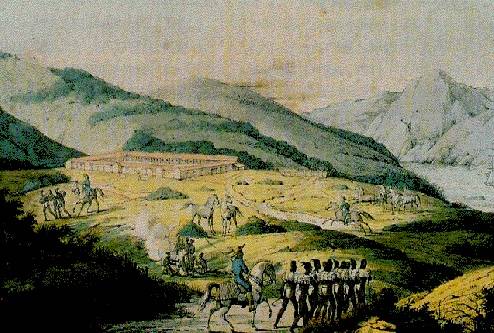 Colonization* of the Bay was assigned to Juan Batista de Anza, a third-generation frontier soldier, who, in late 1775, led a land party of 240 men, women and children, from Tubac (near present-day Tucson, Arizona) to Mission San Gabriel. Anza arrived at Mission San Gabriel (present-day Los Angeles) on January 4, 1776. After helping Rivera y Moncada, Governor of California, subdue an Indian revolt at San Diego, Anza left most of the party at Monterey and led an advance guard to San Francisco Bay. Apparently Rivera would not allow Anza to bring the settlers along because he did not want to weaken Monterey and because he believed that San Francisco was too foggy (!) to sustain a colony. The small party under Anza's leadership, which included his lieutenant, José Moraga, reached the tip of the San Francisco peninsula on March 28, 1776. At the site now occupied by Fort Point, Anza had a cross planted to mark the location of the future presidio. The site** was of course selected for its strategic position allowing surveillance of the entrance to the bay.

The next day, the party headed south in search of the future site of the mission. Three miles southeast they fell upon a sheltered valley bordered by stream and a lagoon. Here, the climate was much warmer, there was abundant fresh water and the land seemed fertile enough to support a mission. The party set camp here and named the site of the future mission Laguna de los Dolores because it was the Friday of Sorrows.

Lieutenant Moraga and Father Palou led the colonists to the San Francisco peninsula in June of 1776. On June 29, 1776, the settlers celebrated a mass at la Laguna de los Dolores. This celebration, held just five days before the Declaration of Independence, is regarded as the official founding of San Francisco. Construction of both the presidio and mission began in July. On October 9, 1776, Father Serra, head of the California missions, officially dedicated Mission San Francisco de Assisi, more commonly known as Mission Dolores, in honor of Saint Francis of Assisi, founder of the Franciscan order. After the official ceremony, the settlers held a feast in celebration of the new mission. The other inhabitants of the San Francisco Peninsula, perhaps sensing the emergence of a radically different reality, seemed much less enthused about the ceremony as Father Palou noted in his diary: "The day was a joyful one for all. Only the savages did not enjoy themselves on this happy day."

After more than two centuries of exploration, the European settlement of the principal bay of California had finally begun. Looking north in the direction of the San Francisco peninsula, Father Serra remarked: "Thanks be to God that now our father St. Francis with the holy cross of the procession of the missions has reached the last limit of the California continent."

"Spanish imperialism in the Bay Area meant the introduction of agriculture, livestock, the use of metals, woven cloth, sail power, and the wheel. It also brought European religion, language, philosophy and world view. Finally, it began the very rapid decline and extinction of thousands of years of Bay Area Indian life. While the Spanish fully intended to destroy Indian religion and culture, the missions and presidios also brought about an unintended, precipitous decline of the native population--in effect, the virtual destruction of the Indians themselves. Those tiny Spanish settlements caused the most drastic change in the human history of the Bay Area."