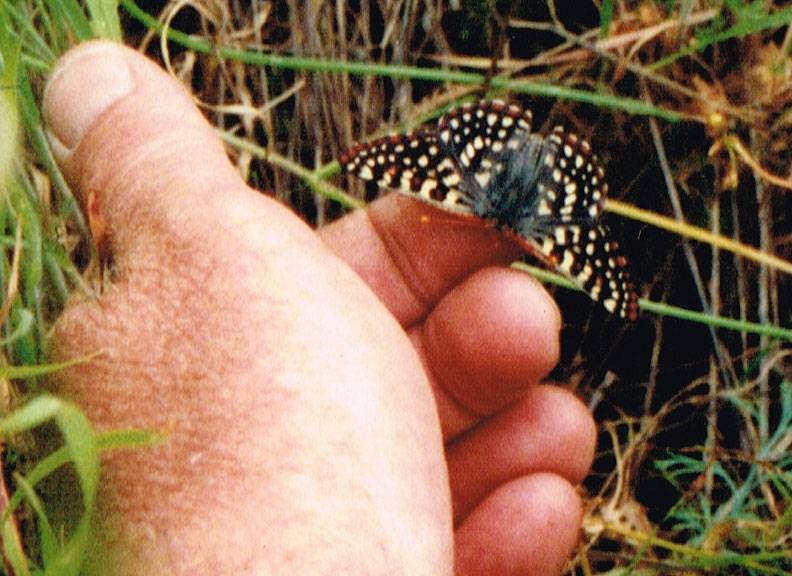 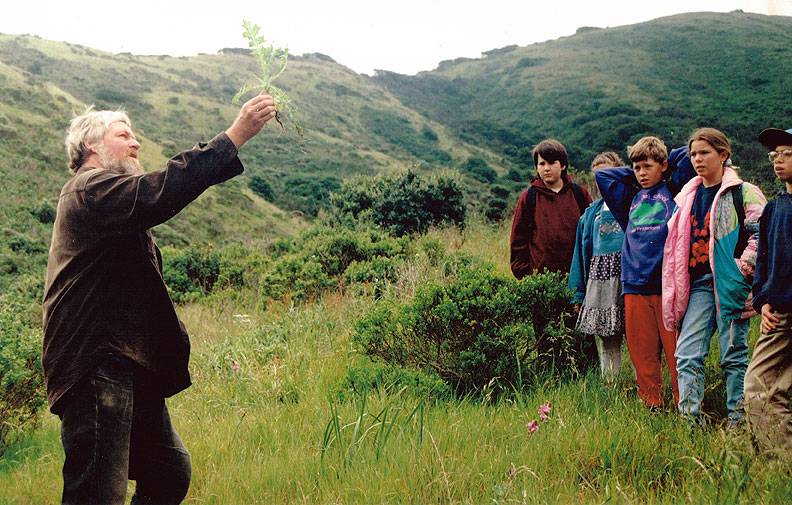 David Schooley has hosted walking tours of San Bruno Mountain for decades. This was in 1994.

What first struck me about San Bruno Mountain was, why is it still there? Backed into on every side by cities and industries of the North Peninsula, one last hold-out of wild Franciscan land.

It felt like a vital open secret, hidden just below visibility in our cultural focus. No Yosemite. No looming Tamalpais. No redwoods. Not even a Bishop pine. It was mercifully the neglected stone, Lapis Exilis. I thought of it as the stone cast away by the builders which, in Jesus' parable, it is said we must find and make our cornerstone as an altogether different kind of builders. If we could learn to see and involve ourselves carefully with its quiet life, there might be more than hope for the planet and ourselves on it. 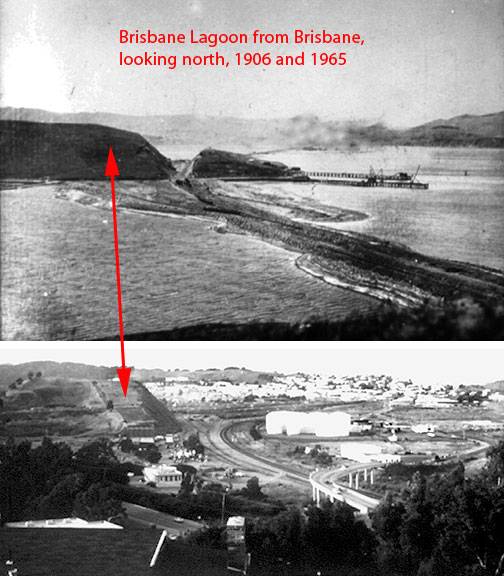 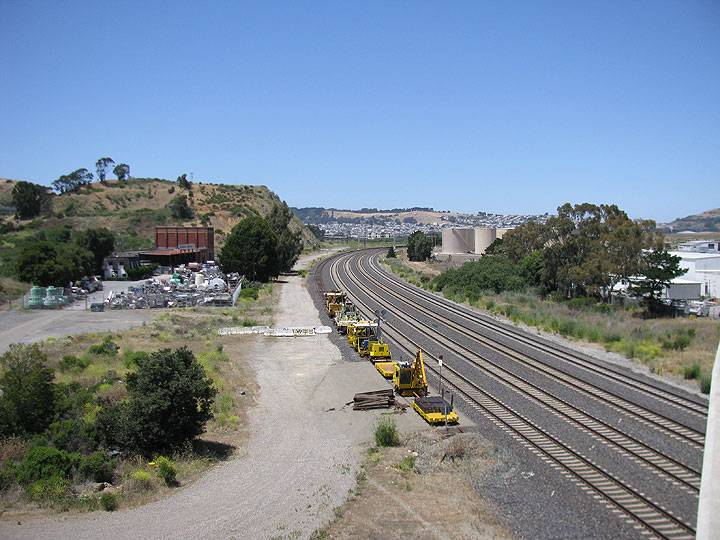 2011 view from overpass looking at same hillside cut originally for the railroads.

Surrounded by the plumbing of S.F., railyards, stockyards, cemeteries, dumps, suburban spill-over, San Bruno Mountain is indeed now being recognized as the last 3600 acres of a unique life zone, the last remnant of truly Franciscan environment left on earth. Developers, at the same time, have also discovered the mountain and plan a new high-rise city of 20,000 people for its slopes and meadows.

Both the quieter discovery of the richness of its native presence and the concurrent hungrier notice of its cash value as expendable space make the mountain a case in point for the meetings of visions taking place in the Bay watershed.

Early in botanical investigations of California, a Franciscan plant zone was postulated to include the entire face of the Bay Region, Sonoma to Monterey. A more attentive look in recent years has disclosed a much smaller "Type Area" covering the hills of S.F. and ending at the southern limb of San Bruno Mountain. This inner region, so long overlooked by us, was a recognition of biotic range directly lived by S.F. Indians whose tribal and hunting and gathering territory precisely coincided with the set of conditions that form the inner Franciscan zone.

As warm Valley air rises, cold wet Pacific air is drawn inland through the Golden Gate at the northern end and the Lake Merced gap to the south. The full year-long force of this weather against the arc of S.F. hills has given rise to an apparently treeless landscape where Ice Age plants have been able to survive and other coastal scrub plants have evolved varieties not to be found anywhere else: a dwarf manzanita, no more than ankle high; a buckeye with tough-ribbed, salt-weather leaves. At the same time, in sheltered ravines, the abundance of Pacific moisture releases subtropical growth in the very shadow of a grass from Nootka Sound or a flower from Siberia. The scale is vast with wild exposure and intimate texture of abundance.

Village sites of the Awashtes tribelet of the Costonoan Indians remain intact in the lower valleys of the mountain surrounded by plant life used for food, fiber, and medicine by their inhabitants. Beside a remnant estuary and salt marsh, once rich in shellfish and water fowl, the village sites and surrounding plant communities provide glimpses of the ghost of a direct economy. On the other hand, published plans and an Environmental Impact Report for a new super city on the same sites offer a vision of inattention to life-in-place. San Bruno Mountain waits right now between these two investments of the earth.

Many of the people who now live around the mountain recognize the development proposal as a death threat to what little they have left of community and to San Bruno Mountain itself, which is by now a symbol of what we are fast losing to a blueprint vision of place as real estate, and community as something to be grid planned and mass produced. This recognition grew in the last five years into an uprising which miraculously has taken the first crucial steps toward stopping the development and demanding that a new look be taken at San Bruno Mountain and its meaning to the Bay Area.

Except for San Bruno Mountain there is no wild land left on the North Peninsula. As such, its acquisition and preservation as parkland has made sense to some planners and elected officials. San Bruno Mountain Park now exists. Now that more and more people know of San Bruno Mountain, perhaps it is time that the neglected hidden focus of the site become its potency. During the battle to save it, the mountain loomed up as the dominant issue in San Mateo County politics. From neglected stone to lodestone, it has polarized all kinds of anger and longing.

But a different kind of potency has always been the background, potency as native place rather than issue or image. Perhaps we can help that potency to emerge in the formation of a park on the mountain. Perhaps the concept of park or preserve can here be turned inside out, no longer an enclosure under siege, a senescent remnant under glass, but a seed ground, not a place to get away from it all, but a place to get into, not a place to look at, but a place to see from.

Perhaps we can put forward the vision of a new kind of dedicated land, beginning with: what kind of park would any of us make on the mountain without the Park and Rec Department? Beyond Nature Interpretive Centers (sic), there do exist many real and untried models. All over the planet are the sacred mountains, groves and water courses of traditional cultures, Mt. Kailas in Tibet, Prescilly Top in England, Wu Tai Shan in China. These were recognitions of innate potency of place, and so became places to enter into the learning of origin. Australian aborigines held that particular places were of the Dream Time and a young man might make there his Walkabout as rite of passage, learning his ground. There were routes of pilgrimage, circumnambulations, the Center, Omphalos, navel of the world, sacred ways and precincts where use and habit might fall away, learning to be found in earth's own feature. And there were the guides, shaman, hermit, the Old Woman of the Forest, the Old Man of the Mountain who knew their ground, might show you the edible roots, the place where a hawk drinks and bathes in summer, or precisely the way to get lost. Modern science looks superficial and invasive beside the ancient learning born of generations of attention to a single place.

These might be the blood lines to the vision of a Preserve whose access and exploration are conceived and guided to nurture Presence and discovery of an "actual earth of value." It need be no Olympus or Fujiyama, no Sinai or Gethsemane. The closer and longer we have to look at a backyard mountain like San Bruno Mountain, the more it bears the wounds of our inattention. Its very lowness on the horizon of our significances becomes the mystery and the learning.