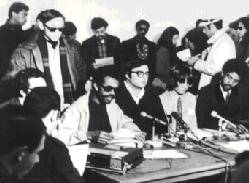 Police used surprising levels of violence in their unsuccessful effort to quell the strike.

Campus is reopened. Sound truck incident occurs. Striking students position sound truck at corner of l9th and Holloway Avenues to urge other students to continue the strike. Hayakawa climbs on the truck and tries to disconnect the speakers. A crowd pulls his tam o'shanter from his head. He allegedly yells, You're fired! to noted author Kay Boyle, and she calls him 'Hayakawa Eichmann!" in return. 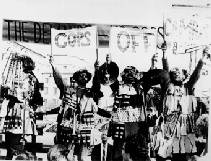