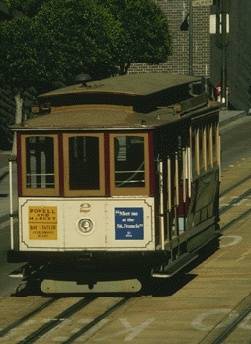 At the corner of Market and Montgomery, there's no memorial to Robert Duncan Milne. He was a drunk who stepped in front of a cable car in 1899. What is significant about this fact is that the San Francisco of today is certainly more the world he envisioned than the San Francisco he died in, according to science fiction historian, biographer, and editor Sam Moskowitz.

Milne was a reporter for William Randolph Hearst's flagship newspaper the San Francisco Examiner. During the week, he wrote reportage on life in the city; in the Sunday editions his imagination was given a free rein, and he published ground-breaking science fiction stories. His writing may well have influenced another Examiner writer, the acerbic Ambrose Bierce, whose biting Devil's Dictionary definitions crop up to this day on the editorial page.

In one of Milne's more impressive tales (A Question of Reciprocity in 1891), he described the aerial bombardment of San Francisco by a helicopter drone launched from a Chilean warship. Bombs fell around Telegraph Hill, and near the Southern Pacific Railways Co. at Fourth and Townsend Streets. The City was ransomed for $20 million.

All hope appeared to be lost, when an American cruiser appeared. Although hindered by fog, the ship launched a single torpedo with a magnetic guidance system; its aim was true, and ended the City's ordeal.

When, towards the end of his life, Milne received $2,000 from his family to finance an edition of his selected stories, he spent the money instead on drink, thus condemning himself to literary obscurity. His fate was sealed when near the turn of the century he staggered into the street and under the wheels of technology.