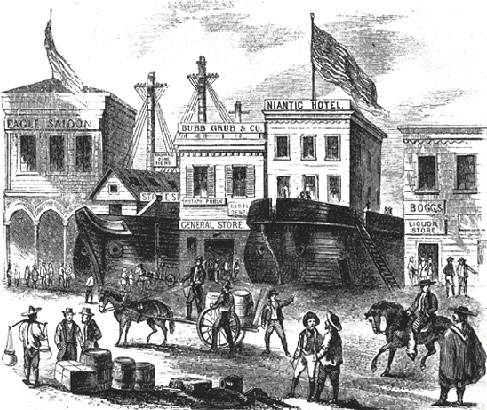 The ship Niantic converted to a hotel

Image: The Annals of San Francisco

The site of the Niantic Building, which is located today on the corner of Clay and Sansome Streets, has had a history of considerable importance to San Francisco Blacks. The ship Niantic stood on this spot in the early days of San Francisco's history. It was converted to other uses by being covered with a shingle roof with offices and stores on the deck, at the level of which was constructed a wide balcony surmounted by a veranda. The hull was divided into warehouses entered by doorways on the sides. The fire of May 3, 1851 destroyed all but the submerged hulk, which later was utilized as the foundation for the Niantic Hotel, a famous hostelry which stood until 1872.

In the basement of this hotel in 1861, George W. Gordon had his barber shop and the sister of his wife a millinery store. Delilah Beasley recounts the incident that led to the murder of Gordon which dramatized the lack of the right of testimony which Black San Franciscans had to endure:

One evening before dusk, as one of the young ladies who had the millinery store was going to her supper in the rear of the store, she suddenly turned in time to see a man robbing her cash drawer. She ran back into the store. When the man ran into the street she continued to chase him, calling, "Stop, thief!" She was not, however, successful in overtaking him. The next morning this white man, who was chased the evening previous for robbing the cash drawer box ... went into Mr. Gordon's barber shop and demanded that Gordon make his sister take back the name "thief" she had called him the night before while chasing him. Mr. Gordon replied that he had not been at home, and had nothing to do with the affair. The white man then began to abuse Gordon, finally shooting him at his barber's chair. When shot, Gordon ran to the street crying "murder." The white man followed him, and, after Gordon had fallen to the sidewalk, shot him again and beat him with his revolver. The proprietor of the hotel was coming down the street and recognized the white murderer. There was, however, in the shop at the time of the shooting, a colored man of very light complexion, a Mr. Robert Cowles [Cowes]. This gentleman witnessed the whole affair, but in order to rule his testimony out of court as a witness, he was subjected to an examination by a corps of physicians, who decided that his hair showed he had 1/16th part of Negro blood, and his testimony could not be taken. There was, however, another witness to be dealt with, and that was the proprietor of the hotel, who had witnessed the tragedy. His testimony could not be disputed, resulting in this white murderer being sent to the penitentiary for ten years. Owing to the fact that the prisoner had tuberculosis, at the end of two years he was pardoned--dying soon afterward.

As a result of this tragedy, the Blacks in San Francisco mobilized to remove from the California statute books the law denying Blacks the right of testimony in the courts of justice.