Hoodline is an online news publication that covers the issues, people, community organizations and local businesses that make up San Francisco neighborhoods. The following article is by Romalyn Schmaltz and was first published on October 14, 2016. 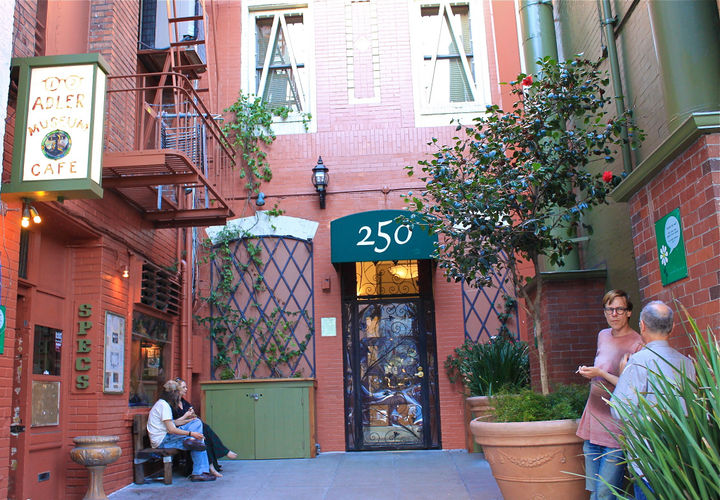 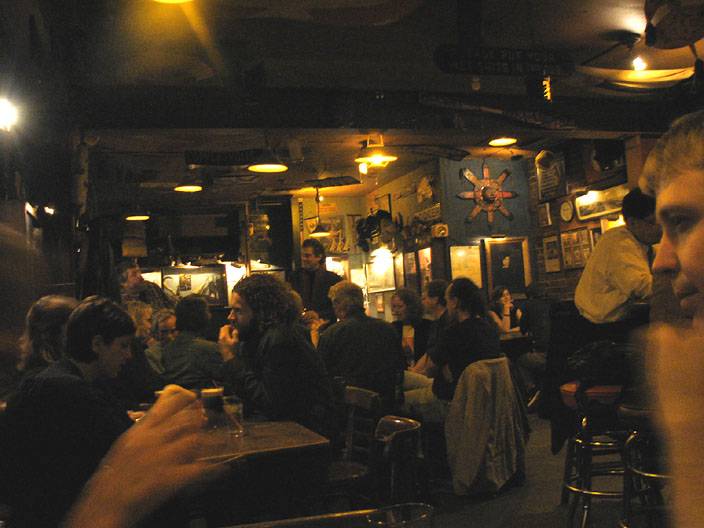 Interior of Spec's bar a.k.a 12 Adler Museum. You really have to visit to appreciate the incredible range of strange and historic artifacts covering the walls and in the showcases.

North Beach said farewell to yet another of its local legends on Wednesday morning, with the passing of Richard Edward Simmons, better known to San Franciscans as "Specs."

The owner of 48-year-old North Beach institution Specs' Twelve Adler Museum Cafe died of complications from Parkinson’s disease, just two months after celebrating both his 88th birthday and the bar's recognition as one of the city's first nine legacy businesses.

Simmons was born August 15th, 1928 in the Roxbury neighborhood of Boston, MA. He arrived in North Beach in 1951, eventually settling in the Western Addition but later taking a flat above City Lights Books, which he owned until his death.

In 1968, he opened Specs—a nickname he earned because of his thick-lensed glasses—as a working-class union bar, where he tended bar as well. His employees are widely considered to be among the most loyal and long-standing bartenders in San Francisco, since Specs put his money where his revolutionary fist was, paying his employees a living wage far over the minimum wage, with full benefits and reasonable hours. Several of his employees have been with Specs for decades, and, along with a handful of patrons, were his dutiful caretakers to the very end.

Simmons was also a steward of the neighborhood. In a city of now-fierce commercial competition, Specs and its neighbors Vesuvio Café and Tosca Café became what local revelers often referred to as the “Columbus Triangle” of old-school, no-nonsense watering holes. Patrons could often be seen bouncing Frogger-style across Columbus Avenue and back again; Simmons called it “The Columbus River.”

"When we met in 1980, he just embraced me, and then I was under his big umbrella of friends," said Vesuvio Café owner Janet Clyde, who noted that Specs met his late wife, Sonia, at her bar. "He hated socializing with most bar owners because, in his words, ‘All they talk about is business. How's business? What a bore!’ And then he would talk instead about trains, sex, and anything else on his mind."

"For me he was like a bon-vivant uncle," Clyde said. "A bit randy and carefree, and a bit in awe of the good fortune that came his way.”

“Back in the '90s, Specs used to come into Vesuvio on my Sunday night shift—always very late, always had a Gordon’s gin and soda in a short glass," said former Vesuvio manager Michael Manson. "He was full of life, a quip always at the ready, and a jolt of energy at the end of a long night. I respected him as a bar owner, a drinker, and as a human being.”

Celebrations are so common as to seem the norm at Specs, in part because Simmons so generously gave over his own “joint,” as he called it, to the many moments that punctuated his patrons’ own lives.

“When I was getting married, my wife and I decided we would ask Specs if we could get married at Specs, so I set up a meeting," said longtime regular Gregg Martínez. "I’d known him for almost 10 years, but I was nervous. We grabbed a couple drinks, sat at the bar, and I took a deep breath and asked him if we could."

"He turned to me and said, ‘Kid, I’ve had birthdays celebrated here. I've had anniversaries and funerals. I've had every celebration you could imagine celebrated here, but I have never let anyone get married here.’ A pause ensued, and I was sure the answer was going to be a big no. He took a sip of his drink, then looked directly at me, and with that naughty little grin of his, he said, ‘Yes, you can.’ His timing was impeccable like that. Needless to say, I got drunk that night.”

Specs' refusal to run his business according to anyone else's playbook was palpable in almost every decision he made. The bar itself almost defies description: a low-ceilinged, dark, and narrow room lined with curio cabinets, inside each of which are trophies, trinkets, artwork, idiosyncratic miscellany, totems, and plenty of socialist and union propaganda. Boxes of hundreds of postcards mailed to the bar over many decades are available for perusal by the patrons.

His business cards were gendered—the one for women said Madam, the gentleman prefers to sulk in silence, while the men’s card read, Sir, the lady is not interested in your company. Among the innumerable memorabilia hanging from the ceiling—though you can’t really see the ceiling in Specs—is a mummified whale penis so large it dangles Damocles-style above patrons’ heads. In the back, a taxidermied snake battles a mongoose so fiercely that it seems a metaphor for the Little Guy versus Big Business.

Simmons was revolutionary in his own celebrations, too. Every April and August, he opened the doors to everyone in the community for his hotly anticipated anniversary and birthday parties. The spreads recalled Ancient Rome, including hundreds of shucked oysters and clams, and were paid for by Simmons and added to by the community, potluck style, until food spilled over every table and available surface.

Sometimes, the party would go on for 12 hours. “The line before the door opened for the party could be dozens deep," one longstanding regular recounted. "And everyone’s welcome. Even the people who’ve been 86ed. It was like Specs’ holy days of forgiveness, renewal, and plenty.”

On the other 363 days of the year, peckish patrons would find only two menu items, but in almost unspeakable portions: bottomless soda crackers, and a wheel of Gouda so large it would look more at home on the side of a car.

Music, often spontaneous, was another standard. A piano at the rear was so well-used that it’s now more of a dessert station for parties. Sunday nights have recently featured live jazz and popular local singers, while Wednesday night was always for the poets.

The Poets’ Table became a midweek tradition well over a decade ago, recalling the Algonquin Round Table of the 1930s. At a large, round table, a group of laurel-leaf-lovers known as ‘The Red Poets’ Brigade' sits and sips and plans for hours, letting the muse take them in the revelries of wine and words.

San Francisco Poet Laureate emeritus Jack Hirschman and his wife, artist Agneta Falk, hold court in the very Specs spirit of ‘anything goes,’ inviting an international audience of writers and readers to keep the written word not only alive, but fighting for the revolution. On learning of Simmons’ passing, Hirschman reverently whispered, “He was a revolutionary progressive.”

Progressive politics was not de rigueur at the bar, but the vibe remains undeniable. “Around here,” remarked another patron, “we’ve taken to saying 'Specs the Man' or 'Specs the Bar,' because in truth, you don’t really know where one ends and the other begins. It was the same with politics: Specs never pushed politics on anyone—in fact, he hated them himself. He was all about social justice, parity, and the unending labor struggle. But since politics in America seldom recognizes these struggles, Specs the Man didn’t always bother to recognize politics-as-usual in America, and neither did Specs the Bar. But social justice? The bar is social justice."

District 3 Supervisor Aaron Peskin remembers Specs as a pillar of wisdom in his district. “The beat goes on, but you just can’t replace a drummer like that. How do you find another salt-of-the-earth, workers’-rights-first seaman-turned-barman who built a community, who sat the oldest and youngest members of a community at the same table?"

"Fortunately for us, the bar is an extension of his personality. And he was funny as hell," Peskin said. "I’m comforted he went knowing that his life’s work had just received at least a 10-year extension on its lease."

Specs benefited from his revolutionary bent in even the most offbeat ways. Years ago, the Kingston Trio overheard Simmons singing “Charlie on the MTA,” a song about the endless fleecing of the little guy. When they released their hit recording of the song in 1959, they included Simmons in the royalties, and he still received checks in recent years for his contribution to shaping the spirit of the song.

Not even Parkinson’s kept Specs' spirits down. Years ago, Simmons adopted a powerful automated scooter that afforded him remarkable—even sneaky—mobility, and he would often pop in for visits, tearing around the bar to greet adoring patrons with a Gordon’s gin and soda in the scooter’s drink cup.

One of his faithful handful of caretakers has been taking Simmons swimming for over three years, because, he said, it let him feel like he was still walking.

Indeed, the willpower of Specs the Man can be expected to live on through Specs the Bar, its many patrons, and a collection of stories so infinite that, if written down, it would take a spectacularly thick pair of glasses to read them all.

The author world like to thank the incredible number of community members who contributed to this story so generously in the midst of such loss.