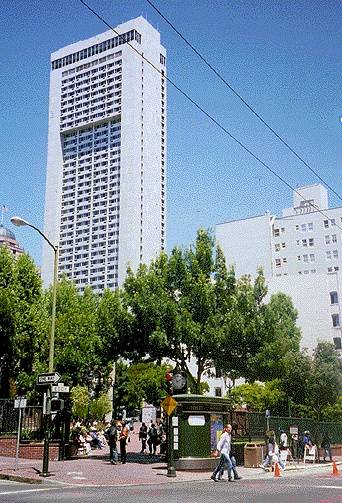 The Hilton Hotel towers over one of three parks in the Tenderloin's, Boeddeker, at Eddy and Mason.
Photo: Chris Carlsson

After they won long battles against conversion of residential hotels to tourist use, neighborhood activists realized that they couldn't keep fighting projects one by one; they needed a way to better safeguard the neighborhood against undesirable development. So the Planning Coalition drew up its own zoning plan for the neighborhood, calling for reduced building heights, fewer bars, and limits on commercial uses -- and then convinced the city to implement most of it. Never again would high-rise projects be able to build in the neighborhood; heights in most areas were restricted to eighty feet.

In seeking to protect the neighborhood from encroaching development, the rezoning was largely successful. The central sections of the Tenderloin stayed off-limits to major development projects and the restricted development potential helped restrain land costs and curb real-estate speculation. Rezoning was a central part of a strategy to protect the neighborhood by gaining greater control over how land would be used, and who would get to use it. A second part of that strategy was for community agencies and non-profit housing developers to buy key sites in the neighborhood. If, on every block that outside developers might covet, community-based groups owned a lot or a building, they would be able to block developers from assembling all the parcels they would need. And if these community agencies owned apartment buildings and residential hotels, they could provide the low-cost quality housing that the neighborhood desperately needed.

The first group to blaze the non-profit housing trail was Reality House West, which had previously operated a drug rehabilitation program in the Western Addition. Seeking partly to provide housing for ex-convicts, Reality House bought the Cadillac Hotel, a once-venerable 160-unit hotel on Eddy Street that had fallen on hard times and was largely vacant. Leroy Looper, the director of Reality House, bought the building, renovated it and operated it as low-cost housing for the poor. It quickly became one of the nerve centers of the neighborhood, its lobby and dining room the site of numerous, sometimes contentious, community meetings; its commercial storefronts rented to community agencies working to organize and improve the neighborhood.

A few years later, the Tenderloin Neighborhood Development Corporation picked up the effort, launched with money and energy from the Catholic Franciscan Catholic community that was active in the Tenderloin. The group began by buying four neighborhood buildings, which it envisioned turning into tenant- run cooperatives, where residents would decide for themselves how things should be run.