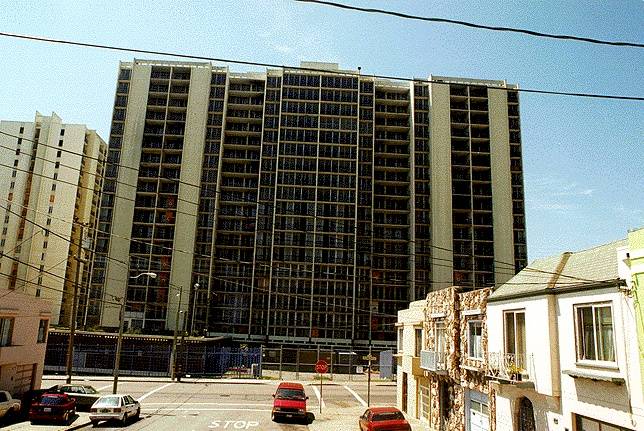 San Francisco's very own public housing disaster, looming over Visitacion Valley near the Cow Palace. The Geneva Towers have been scheduled for emolition in 1997. Further west lies the Sunnydale Housing Project, once a sprawling sea of barracks, now a dangerous and desperate home for those who must live there.

But it was other things that the Geneva Towers were known for. Things such as elevators not operating, plumbing so deteriorated that the water ran brown, rampant drug dealing, shootings, and a never ending presence of rent a cops and hostile San Francisco police that looked like something out of present day Indonesia.

When the 576-unit buildings were built with federal money in 1967, I wasnt even born. The buildings were meant to be exclusive private dwellings, and at first they were filled with a mix of doctors, lawyers and people of all incomes. Gradually, the Towers became predominantly black and low incomes, and the management let the buildings go to hell.

Over time the white buildings became dull gray towers, but still they could easily pass on the outside for Central Park condominiums in New York City. I wasnt a resident of the buildings, but in my earlier years I was a frequent passerby and later a frequent visitor. The Geneva Towers were the only buildings south of downtown that you could see for miles away driving up 101.

I would always hear about a lot of crime at the Towers, but when the armed security officers at the Towers were shooting their pistols on the roof, you didnt hear anything about that, said Harrison. The stigma always fell on the tenants.

There were a lot of good times and bad times, said Brown. I am kind of happy to see them gone, but they will be missed.