by June A. Osterberg, originally published in The Semaphore #213, Spring 2016 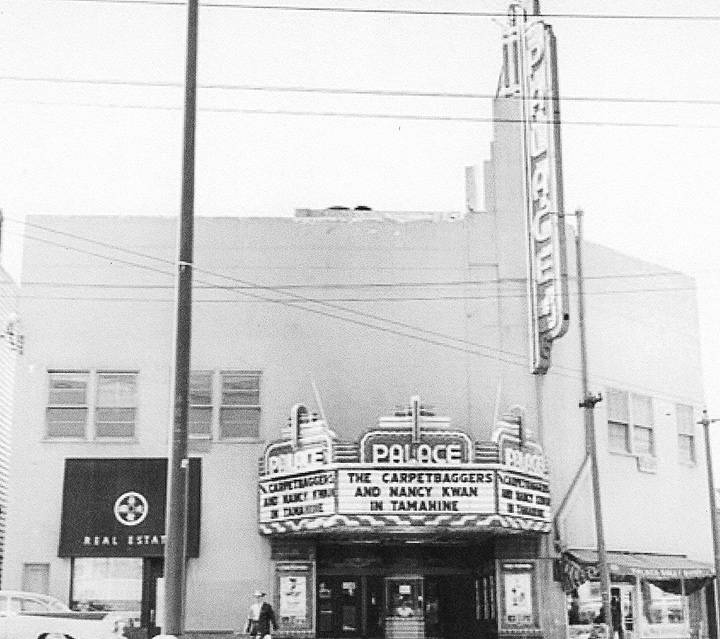 Walk by the corner where Powell Street meets Columbus Avenue, across from Washington Square, and you will see it is a construction site again. This noisy activity is on its way to becoming a major Mexican restaurant with several floors of pricey condominiums above and underground parking below—the outcome of a long battle over the fate of the landmark theater building which was demolished in 2013, graffiti and all.

Variously known as the Palace, the Pagoda, and Pagoda Palace, the Art Deco theater sat vacant for more than 20 years while development plans came and went. Most, including that of Joel Campos, the current owner, were not considered appropriate forthis choice location because of its proximity to the park.

The City came on the scene with its own huge project, the new Central Subway, and the new use became removing the tunnel’s enormous boring machines and then trucking them away in pieces. Under a costly leasing agreement, Campos postponed his dream for the City’s vast project. The MTA’s outreach meetings about using the site for a future subway station stirred strong passions on both sides among community residents. With the prospect of more delays and debates looming, this choice location’s future was sealed.

The Palace Theater occupied the site at Powell and Columbus for the longest period, but it wasn’t the first occupant. Until 1906, this spot housed the elegant Russian Orthodox Cathedral, destroyed in the earthquake and fire. 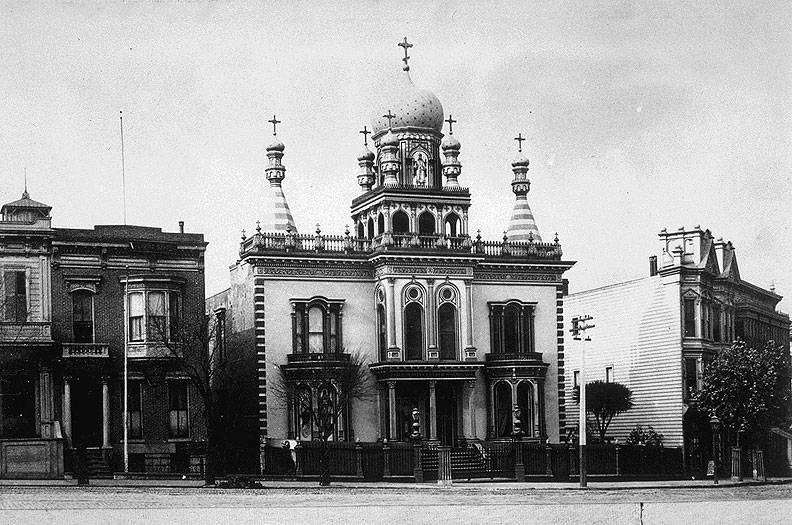 When the Washington Square Theatre was built in 1909 it was the first of several theaters to brighten the west side of this already historic park. A venue for live performances, it was followed by the Milano Theatre, which showed American motion pictures. The Milano was replaced by the Palace Theatre just before World War II, which carried on as North Beach’s popular movie house for many decades. 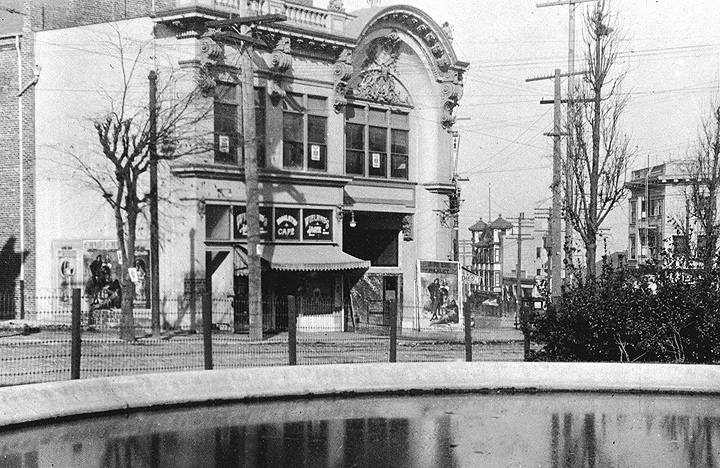 One of the structures that sat at the corner of Powell Street and Columbus Avenue prior to the Palace can be seen here just beyond the Marini pond. This was the Milano Theater.

A Chinese movie theater opened there in 1967, showing Chinese films and occasionally live Chinese opera. The marquee had borne the name Palace so long that when the new owners wanted to rename the place they chose another six-letter name to fit the sign: Pagoda. However, there was so much community affection for the old Palace that the name morphed into the Pagoda Palace.

When the Cockettes Played the Palace

A remarkable dual personality emerged. Starting in 1969, the Cockettes, a talented and uninhibited troupe of performers in drag, created a sensation with their original, outrageous “midnite shows.” When moviegoers who had come to see the Chinese films would file out from the last show about midnight, there would be a crowd of people on the sidewalk, eager to enter the theater for Nocturnal Dream Shows. These would start about 12:30 and go on until 2:30, except for Halloween, when the show lasted until after 4 AM.

Both straight and gay people filled the theater every night the Cockettes were appearing. Tickets were $2 or $2.50. The hilarity went on into 1972. The shows had names like Pearls Over Shanghai, Circle of Life (subtitled “The Rudest Show on Earth”), and Smacky and Our Gang. On the screen there would be films such as Laurel & Hardy in The Chimp, and You’ll Never Get Rich, and Night of the Living Dead.

The Pagoda Palace continued to show Chinese movies and Chinese opera until late in 1985. The Renaissance-Rialto theater chain took over in 1986, refurbished the building, took back the name Palace, and reopened the theater as a repertory movie house. The first movies featured were two filmed in San Francisco: The Maltese Falcon and Dark Passage. The latter headlined at a $10-a-person fundraiser to save the Grace Marchant Garden on Telegraph Hill.

The repertory operation was short-lived on account of poor attendance, and the name Pagoda Palace reappeared. Sometime in the mid-90s the theater building was acquired by a reputed Hong Kong billionaire. Soon after, in an attempt to convert it to retail use, the building was gutted. Nothing of the old Art Deco objects and furnishings remained, not the ticket booth, not the curving stairs, not the valuable dance floor upstairs. Commenting on the “insensitive alteration,” the Foundation for San Francisco Heritage Newsletter stated in its March/April issue: “Only the pylon that bore the colorful blade sign and a canopy barely suggestive of the marquee (which had been previously modified) remain to suggest the original character . . .”

In late 1995 a mini-mall was proposed for the space. It was opposed by the community and did not materialize. The Rite-Aid drugstore sought to open a jumbo outlet in the old building. Neighborhood residents rallied against that, too, believing that a large late-hour store selling liquor was inappropriate for the prominent location on Washington Square.

The neighborhood gave a warmer reception to a plan by Doug Ahler of New Orleans. His ambitious idea was to rename the building Muriel’s Theatre and stage live dinner shows. But the dot-com collapse and the economic downturn doomed that scheme, despite the huge investment made to return theater to the theater building.

Instead, after years of neglect and deterioration, the neighborhood’s historic structure was unceremoniously leveled for the City to extract its boring machines from the site. The Pagoda Palace’s last appearance was on the National Trust for Historic Preservation’s list of 10 historic sites lost in 2013. 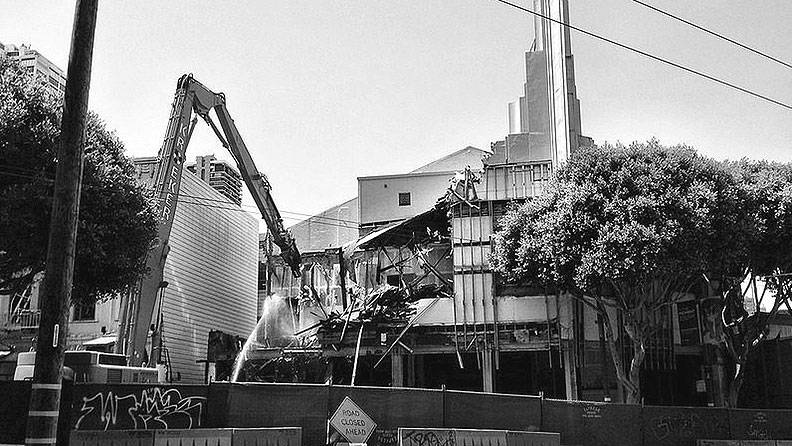 End of the Palace Theatre.

This article was adapted by June A. Osterberg from her longer story in the September 2003 issue of the North Beach Beat.