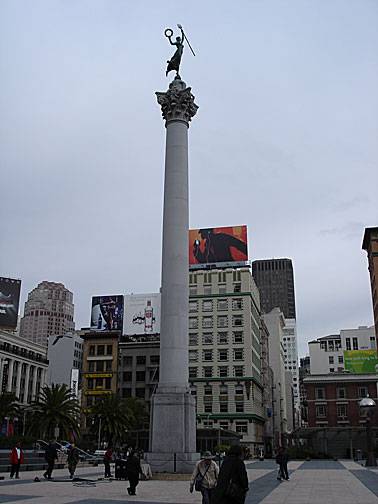 In the middle of Union Square, one of the choice tourist spots in the City, stands a monument "Erected by the Citizens of San Francisco to commemorate the Victory of the American Navy under Commodore George Dewey at Manila Bay." This monument to the prowess of the Navy in the 1898 Spanish-American War is surrounded by symbols of Western capitalism and haute couture, such as Macy's, Tiffany, Saks, Hermes, the Westin Hotel, and the Grand Hyatt. Unbeknownst to many of the millions of tourists who pose by the monument for their souvenir photos--indeed, unbeknownst to most San Franciscans--is the fact that America's great naval victory also led to a bloody war waged against Filipinos fighting for their independence. 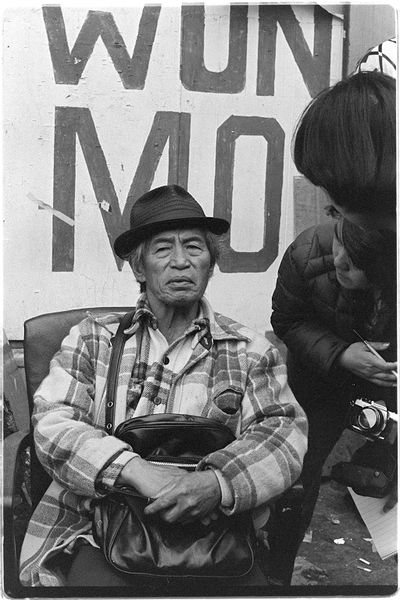 Wahat Tompao sits on the street outside the I-Hotel at 848 Kearny St.

Just a few blocks away from Union Square, behind the Transamerica Pyramid, in the basement of 407 Sansome Street, the Filipino-American poet Al Robles served lunch at the Manilatown Senior Center. One of the Filipino regulars is Felipe Daguro, 91 years old and a retired stevedore worker. When Daguro immigrated to America in 1918, he was a just young boy and ended up working in the sugar plantations of Hawaii. He came to San Francisco in 1946 and worked as a stevedore for the Port of San Francisco. Daguro is one of many manongs (elder brothers) who come daily to the Manila Senior Center kitchen and pay for the $1.25 lunch. Why do these manongs come to the Center? What is the Manilatown Senior Center doing in a place surrounded by prominent capitalist icons such as the Pacific Stock Exchange and the Transamerica building?

Like Daguro, these manongs used to live only a few blocks away at the International Hotel at Kearny and Jackson Streets. And, like Daguro, ten years ago the manongs were forcibly evicted from their homes by San Francisco police and sheriffs deputies. 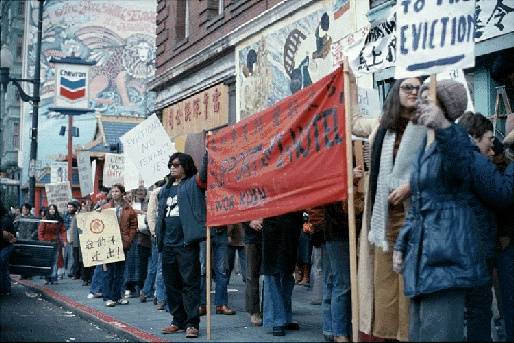 Today, at the site of the former International Hotel there remains a huge hole surrounded by barbed-wire and chain-link fence. And right next door, at Kearny and Washington Streets, at the main entrance of the 27-story Holiday Inn, tourists from all over the world arrive daily at the main lobby. Soon they, too, will visit Union Square for their souvenir photos. Some may even read the inscription at the base of the monument, but no one will draw the connection between the Union Square monument, American imperialism, and the huge empty hole at Kearny and Jackson. 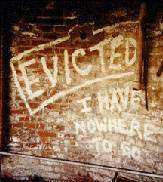 Graffiti sprayed in the hole that once held the I-Hotel and was replaced by a new structure after almost three decades. 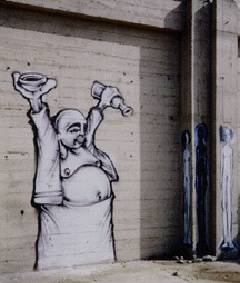 Twist graffiti in the I-Hotel pit