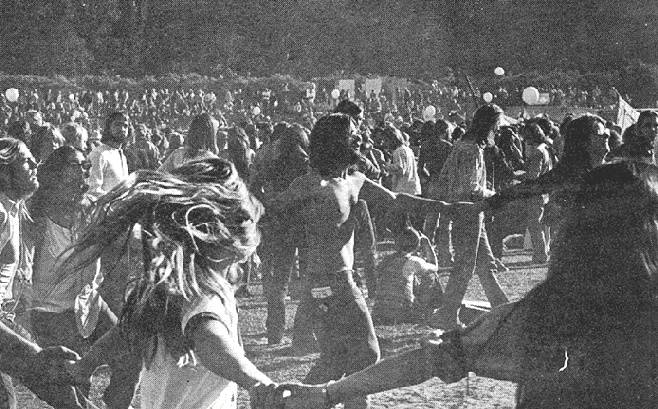 There was [another] march for peace on Saturday. About 20,000 made the trek from the Embarcadero to the Polo Field in Golden Gate Park. I drove this time instead of marching. I viewed the whole affair with mixed emotion.

The largest nuclear explosion ever touched off by the US--Amchitka--took place midway through the demonstration, as if to mock the peace movement's efforts.

But the march was led by sailors from the USS Coral Sea who are trying to stop their ship from returning to the Southeast Asia war theater. Some of the men had watched last April's peace march when 200,000 marched and the whole thing had turned around their heads. Ths time they were leading the march and trying to stop their ship from leaving for Vietnam. So I went to the demonstration to distribute leaflets about the Coral Sea to spread the word about what these sailors were trying to do.

Nine of the sailors got up on the speakers' stand and announced that they will not be aboard the Coral Sea when it is scheduled to sail Nov. 12. "We should take those 600,000 pounds of bombs and shove them up Nixon's ass," said one. Everyone, liberal, radical, and revolutionary, cheered.

Their actions and words contrasted starkly with most of the other speakers. One official of the International Longshoremen and Warehousemen Union got up to say how much he and his union were for peace.

"Liar, liar," shouted members of the crowd, who reminded him that members of the his union are loading war materials for that ugly war daily. "Stop loading bombs," the crowd shouted up at him. The hecklers made him angry.

Former New York Congressman Allard Lowenstein, who has made a career out of his ballot box opposition to the war, also spoke. He was one of the originators of the "Dump Johnson" campaign. He said the way to end the war is to vote against Nixon.

He got the same response as the ILWU official got, "Bomb the ballot box," shouted one group. "Vote Communist," chanted those radicals who are a little to the left of the Democratic Party.

The most theatrical moment of the day was a 2 pm, the time of the Amchitka explosion. There was a moment of silence leading up to the big moment. Then at 2 pm a siren on stage signaled the nuclear blast. A flock of doves were released. The doves were pretty confused and some of them flew off the stage and landed in the crowd. Some in the crowd shouted, "We've been silent long enough, bomb Nixon."

Pierre Vaillancourt, the sculptor who created the fountain in Embarcadero Plaza, said he wanted to take one of the doves and tear it apart as a protest to the limp-wristed nature of Saturday's protest. He restrained himself, however.

Most of those who marched were not aware of these arguments. They marched because they were opposed to the war, to Nixon. The majority were young freaks who are turned on by the festive air of the march. Viet Cong flags were plentiful. Such rock groups as Clover and the Elvin Bishop Band performed.

At the edge of the crowd members of Revolutionary Union sold Red Books, Jesus Freaks offered free koolaid and cookies if you listened to their spiel, McGovern supporters sold bumper stickers, and the Trots sold literature. The Beast, an East Bay theatrical group, put on a skit knocking the liberal nature of the march.

The demonstration was liberal. Peace is something that even Mayor Alioto can endorse. He issued a statement deploring the war not only for the loss of life and resources but for the "dispiriting effect on the American people who live in our big cities."

Despite this, the marches have become progressively radical. One group carried a big banner which said "Support A Communist Victory in Southeast Asia." That sign would not have been permitted at the first Vietnam Day march held in Berkeley in 1965 when 14,000 marched to the Oakland line. The people are becoming more radical even if the organizers aren't. 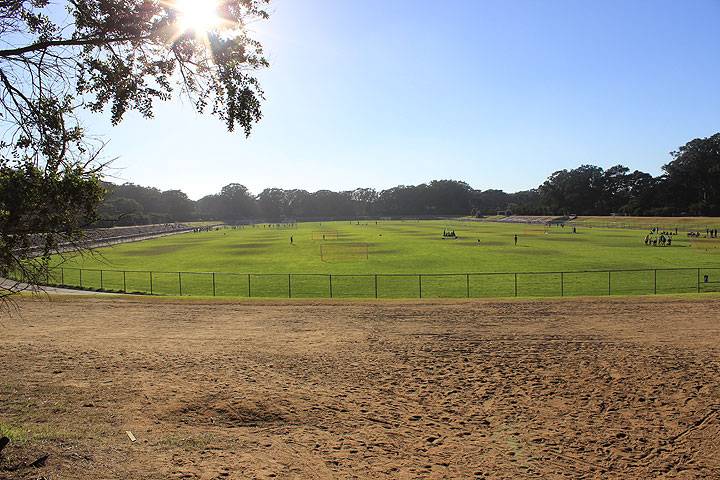 The Polo Fields in 2013, years after being crowded by political demonstrations.