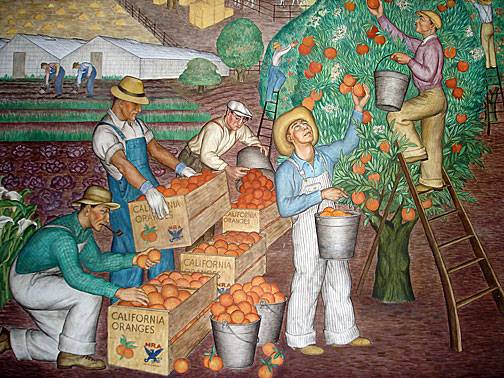 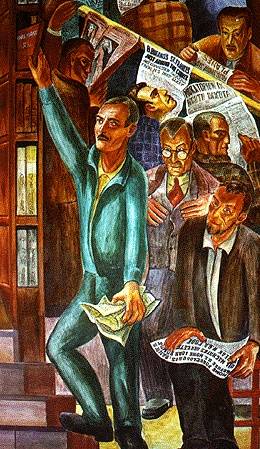 Detail from Library by Bernard Zakheim at Coit Tower

Murals were still an elite expression until the 1920s in Mexico. At that time, the Mexican muralists began to execute their works on the walls of public buildings. The leading muralists (there were many more, some of whom, such as Covarrubias, have been influential in San Francisco) were Diego Rivera, David Alfaro Siqueiros, and Jose Clemente Orozco, who became known as Los Tres Grandes, The Three Great Ones. Among these, Rivera is particularly significant for San Francisco because he painted four murals here. Rivera is important for other reasons, too. His anthropological studies informed his depictions of ancient Mesoamerican cultures, which included the great murals of Teotihuacan and Bonampak. Perhaps most importantly, his communist political activism inspired many community muralists to commit their skills to the struggles for social justice of the 1960s in the United States: Civil Rights, Women's Liberation, the anti-Vietnam War movement, and celebration of local poor, ethnic, and working class communities.

At the same time Rivera was painting in the United States, the New Deal mural programs were beginning with the first project at Coit Tower. In fact, some of Rivera's assistants were significant New Deal artists and later became involved in San Francisco's community murals: Emmy Lou Packard, Lucienne Bloch and Stephen Dimitroff. Other than influence by example, the main lesson of the New Deal murals was stylistic: social realism. They had a story to tell, a message to communicate, and realism was selected as the appropriate stylistic vehicle.