Protesting Techsploitation in the 2010s

Multiple protests have erupted against the displacement and gentrification unleashed by the rise of the tech economy, sometimes called Web 2.0, in the 2010s. 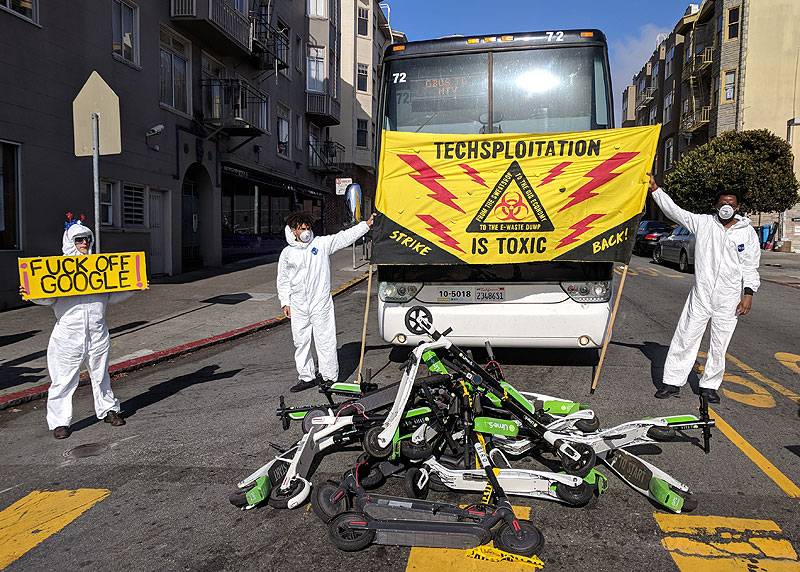 Blockading a half dozen tech buses with a pile of purloined e-scooters, May 31, 2018, at the corner of Valencia and 24th Streets in the Mission. 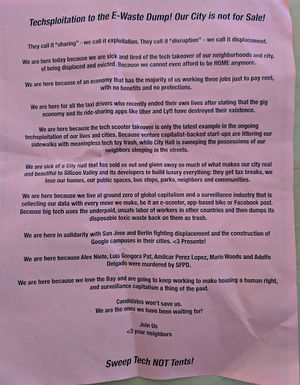 Techsploitation to the E-Waste Dump! Out City is not for Sale!

We are here today because we are sick and tired of the tech takeover of our neighborhoods and city, of being displaced and evicted. Because we cannot even afford to be HOME anymore.

We are here because of an economy that has the majority of us working three jobs just to pay rent, with no benefits and no protections.

We are here for all the taxi drivers who recently ended their own lives after stating that the gig economy and its ride-sharing apps like Uber and Lyft have destroyed their existence.

We are here because the tech scooter takeover is only the latest example in the ongoing techsploitation of our lives and cities. Because venture capitalist-backed start-ups are littering our sidewalks with meaningless tech toy trash, while City Hall is sweeping the possessions of our neighbors sleeping in the streets.

We are sick of a City Hall that has sold us out and given away so much of what makes our city real and beautiful to Silicon Valley and its developers to build luxury everything: they get tax breaks, we lose our homes, our public spaces, bus stops, parks, neighbors and communities.

We are here because we live at ground zero of global capitalism and a surveillance industry that is collecting our data with every move we make, be it an e-scooter, app-based bike or Facebook post. Because big tech uses the underpaid, unsafe labor of workers in other countries and then dumps its disposable toxic waste back on them as trash.

We are here in solidarity with San Jose and Berlin fighting displacement and the construction of Google campuses in their cities. <3 Presente!

We are here because we love the Bay and are going to keep working to make housing a human right, and surveillance capitalism a thing of the past.

Candidates won’t save us. We are the ones we have been waiting for! 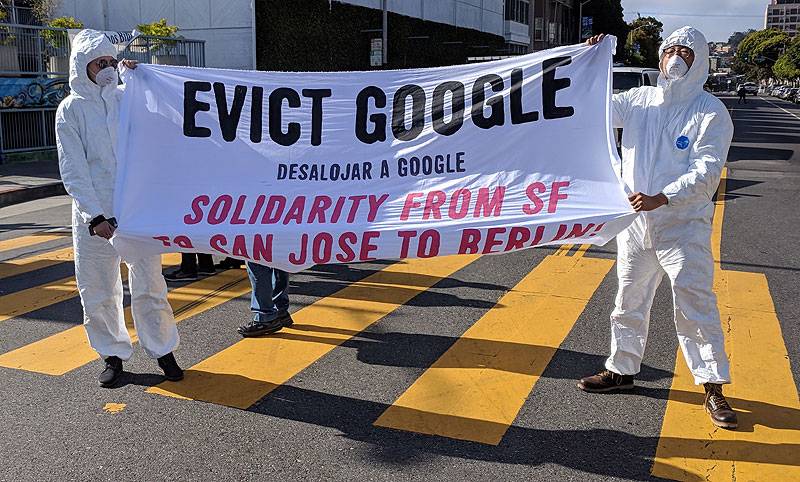 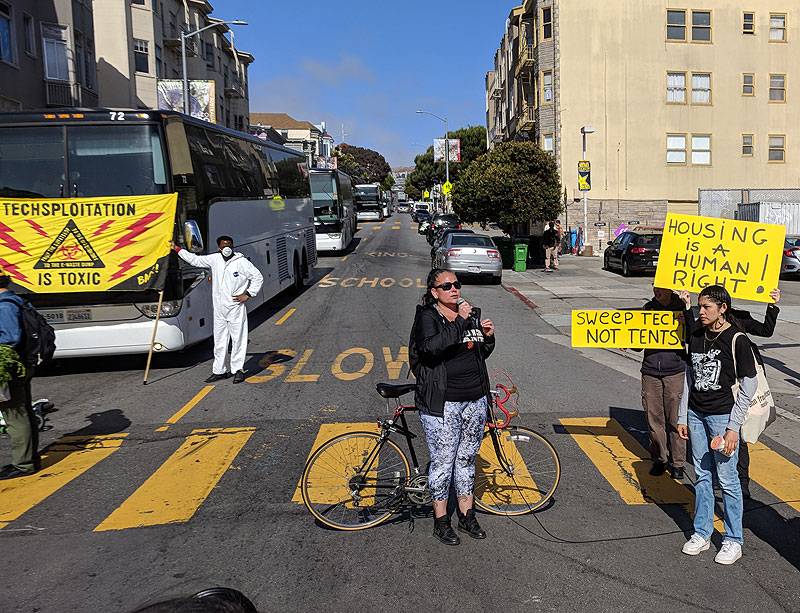 Nancy Pili addressing the crowd as the tech buses pile up behind her up the hill... 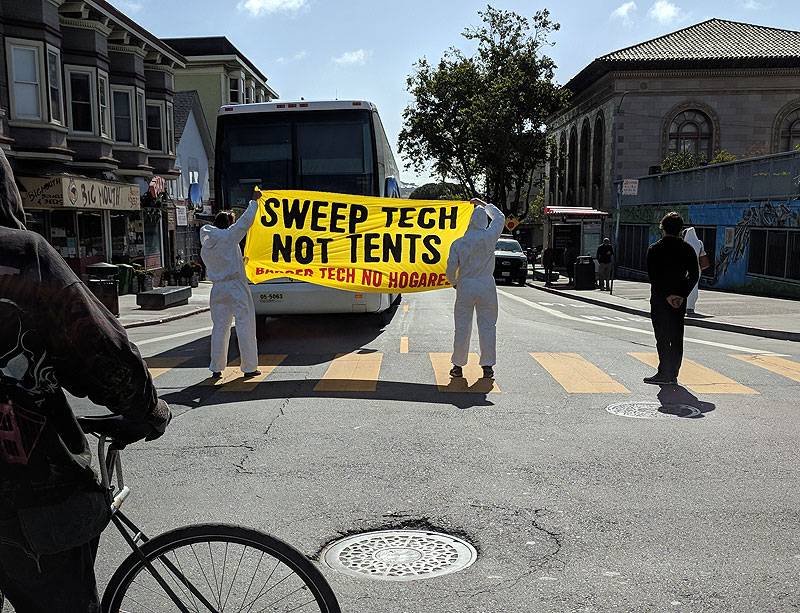 Buses were blockaded in three directions. 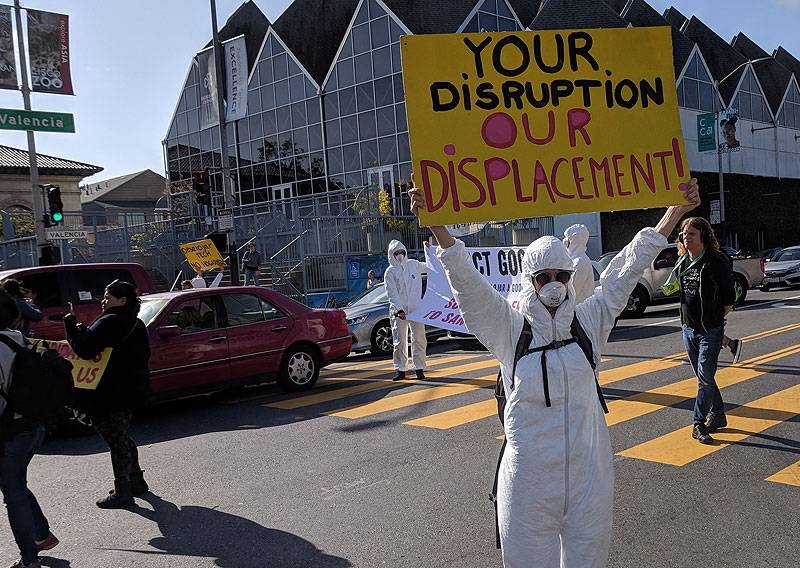 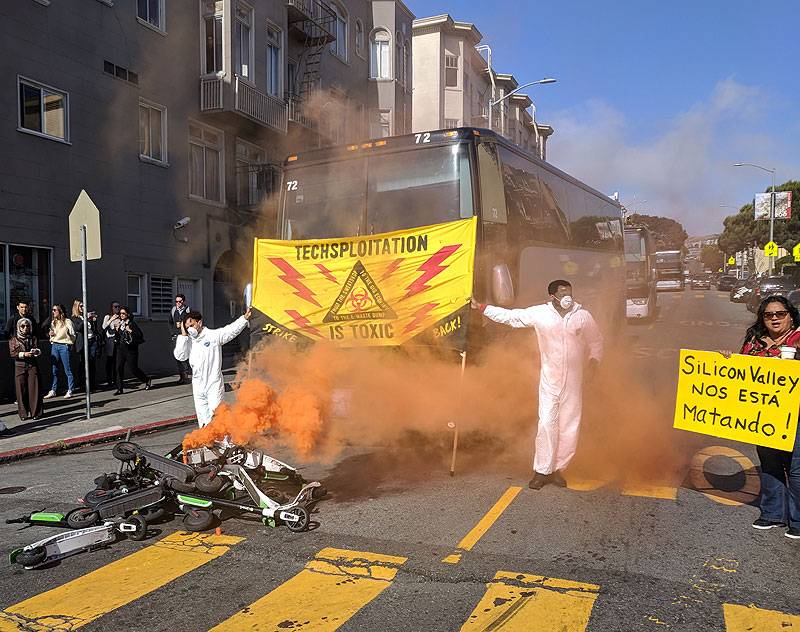 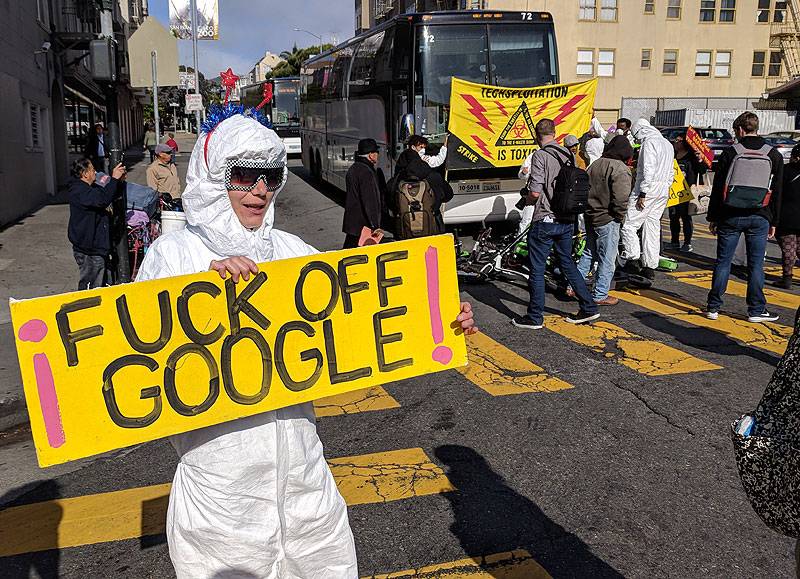 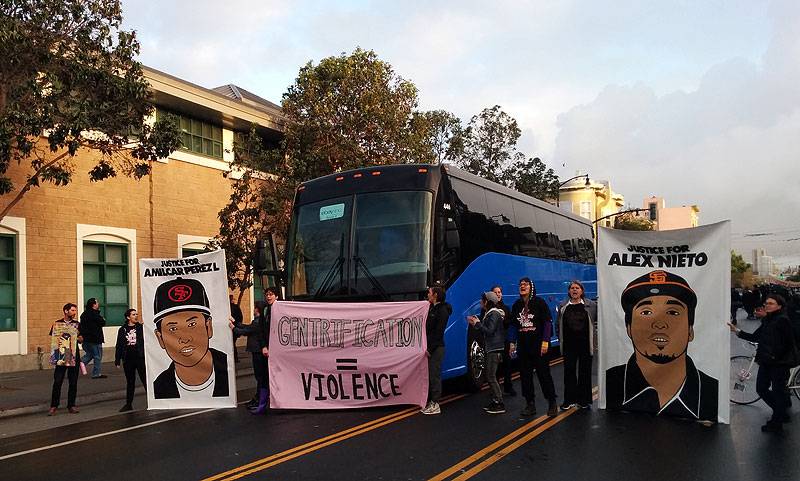 On March 23, 2015, an Ebay commuter bus was blockaded in front of the Mission Police Station at 17th and Valencia during a protest against police violence. 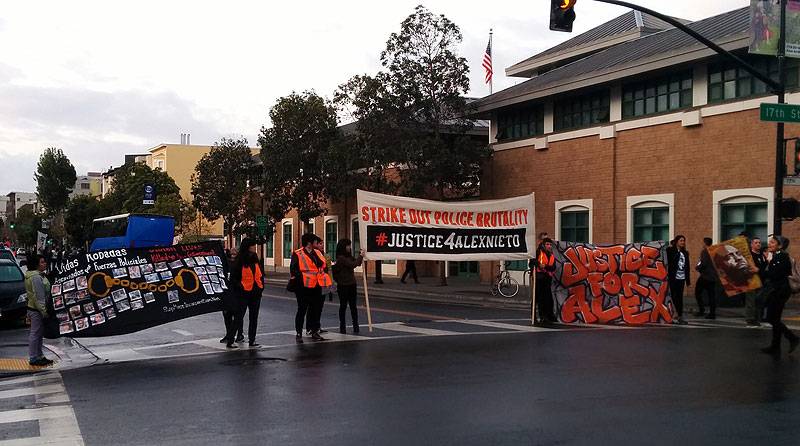 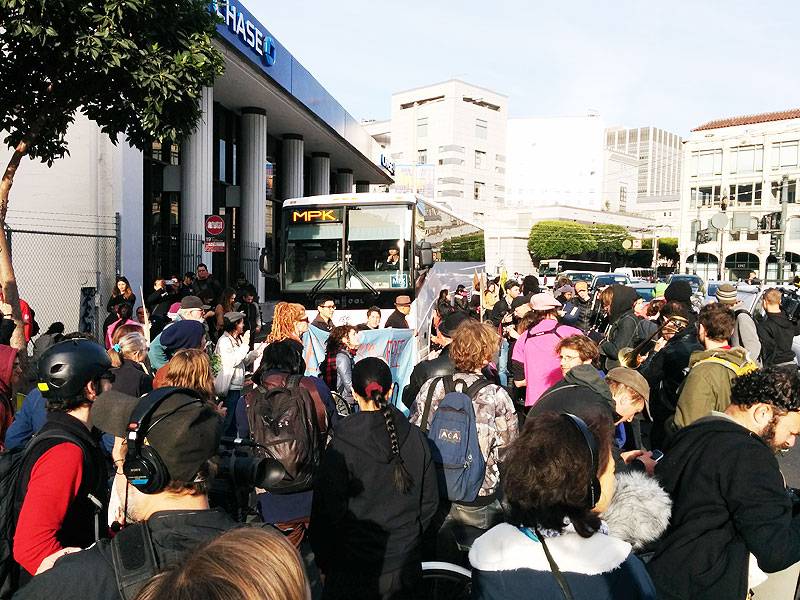 At the beginning of January, 2014, a Google bus was blockaded near the corner of Market and 8th Streets... which eventually led to several more buses getting tangled in the same blockade. 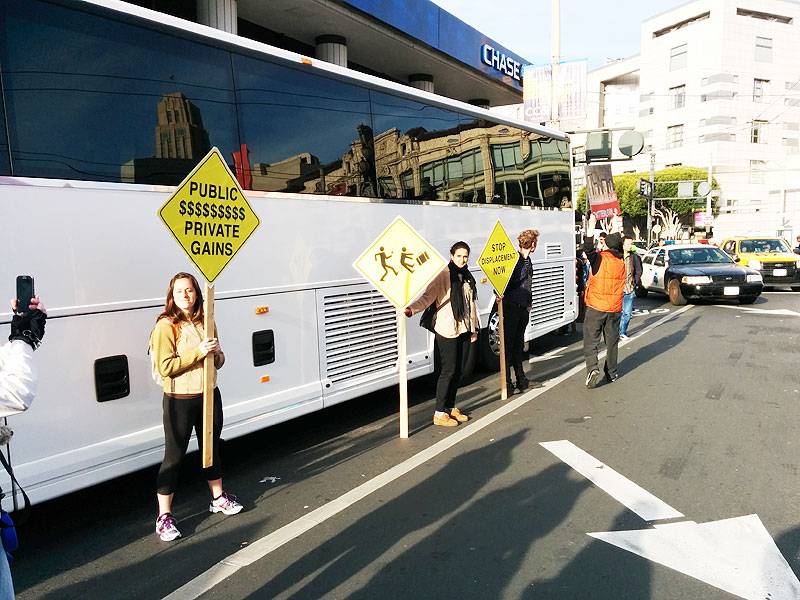 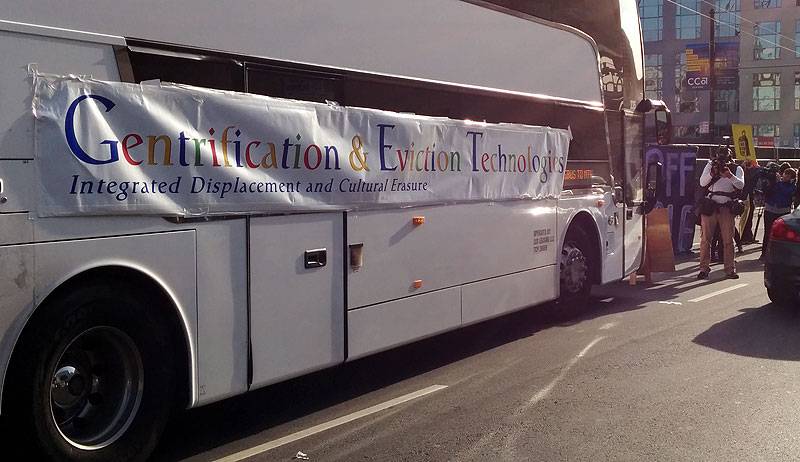 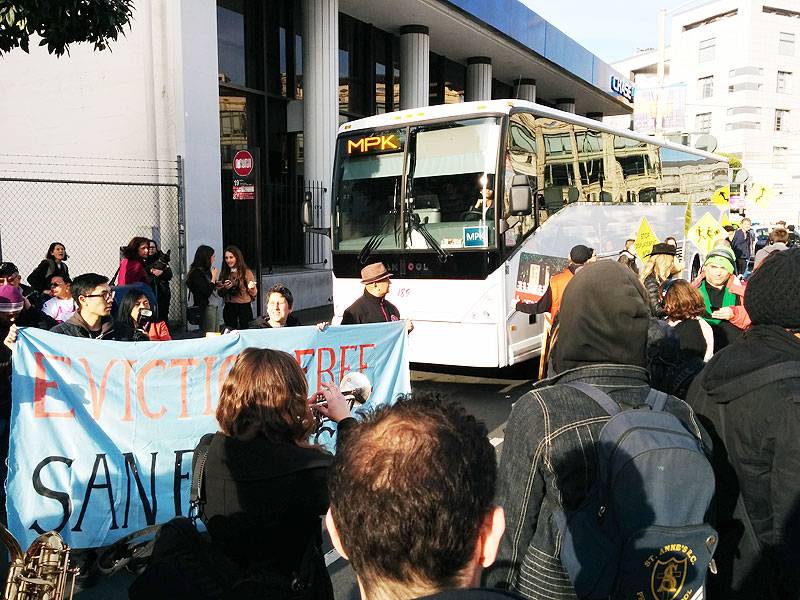 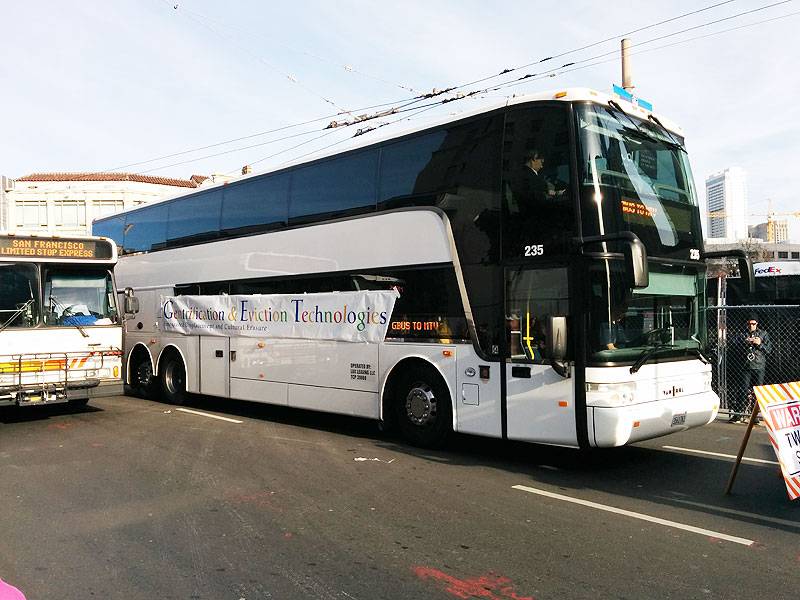