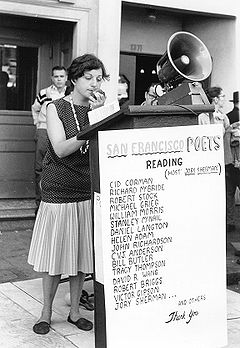 Ruth Weiss reads at the Grant Avenue Fair in 1960; Photo: C.R. Snyder
In 1958, in Richmond, across the bay from San Francisco, I was in the twelfth grade. In Mrs. Weatherby's English class, a history of literature, the mandatory play was Hamlet. We had come to Wordsworth about the time of the Howl trial in San Francisco. Beatnik life exposés filled the Chronicle. Grant Avenue seemed like a bizarre heaven of music, strange poetry, weird characters—a break from the Eisenhower ordinary. That spring I went over to the Grant Avenue Fair with my friend Bob.

The afternoon was sunny, with a slight bite to the wind, and flooded with people. Up Grant were coffeehouses, booth after booth of craftspeople and artists, lots of sandals and canvas paintings. Inside a storefront two black musicians were playing, one the congos, the other a flute. Across the street, on the corner of Vallejo, a black poet stood on a crate, literally yelling down his poetry:

You who come down here in your Edsels
You with the deodorant in your arm pits. . .

One hand held the text, the other swung and finger-pointed through the air like an angry preacher's. Later I would see him putting his arms around a white woman, apparently a friend, swinging her around in a dancelike step on the sidewalk, before scooting down the street towards Vesuvio's.

Bob and I walked up the street and stared through the front window of the Coffee Gallery, amazed at the intense concentration of two men playing chess in the window and the big audience that perused each move. Then, as we turned back down the street, about an hour later we came to a big crowd at the corner of Vallejo and found another man up on the box, surrounded by a huge crowd of at least a hundred people. Again, the man read with one hand holding the text and the other arm reaching up like a prophet's, his fingers circling and pointing with the movement and intonation of the language. A huge web, a gigantic celestial web was approaching, getting ready to circle and embrace the human spirit. The poem was a big buildup for a beatific apocalyptic future. Between the serious lines, the poet would set a comic smile on his face, as if he were both poking fun and believing the vision at the same time. As the web in the poem got closer and closer to earth, he circled his hand over the shiny red bald head of a man who was almost pressed against his navel, and the crowd laughed.

That Sunday afternoon sticks clearly in my mind. In a sense it was my first poetry reading, the first time language struck out of the air like that, literally lighting up the ears. Whether or not it was great poetry—who was I to know?—the acoustic effect was enormous. A breach was taking place. Someone was taking language into the open, making it tangible and attractive. The two people were Bob Kaufman and Allen Ginsberg, and their histories, especially Allen's, are pretty well known. My friend Bob and I would carry copies of Howl in our back pockets for the rest of the semester. 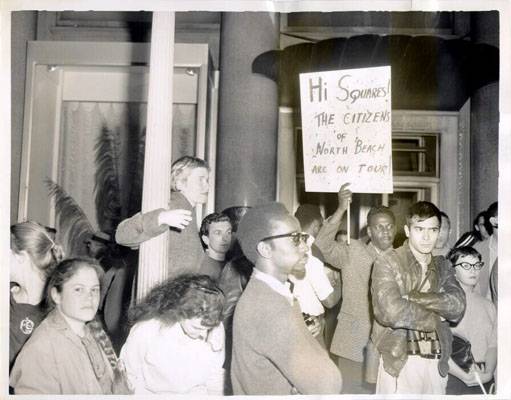 After four years away at college, I went to San Francisco State in the early 1960s as a graduate student in creative writing. There I began to hear poetry in a regular way. The Poetry Center, begun in the late 1950s under the direction of Ruth Witt-Diamant and Robert Duncan, presented a series of readings each semester. While I was at State (1962-1965), the director was Jim Schevill, assisted by Mark Linenthal. Every other week in the Gallery Lounge, one or two poets read. The mix was rather broad. I remember hearing, from the Bay Area, Duncan, Kenneth Rexroth, Lew Welch, Gary Snyder, Jack Gilbert, and Helen Adam; from the Midwest and the East, John Logan, Robert Mezey, and LeRoi Jones; and from England, Charles Tomlinson. For me the Tuesday afternoon ritual was deeply important. I was paid $2.50 to setup the folding chairs in rows of perfect arcs facing the podium, and then take them down again. It was a special gestalt, as if a unique architecture were required to get an accurate rendering of the poet's true voice.

Indeed, at their best, readings in the Gallery could give the poem a purity of enactment. I vividly recall John Logan reading an autobiographical poem about going to a circus when he was a child. At one point, with incredible precision, he described one ladder being balanced on a ball, then another ladder at an angle on the first ladder, and then, after a precarious pause in which the whole work seemed barely balanced in mid-air, he allowed the comparison "as tenuous as a soul." I remember Charles Tomlinson describing with such careful accuracy the process of taking a knife to swivel the skin off the edge of an apple. At four o'clock one afternoon, Helen Adam sang her spooky ballads, among them the one about the hair of the first wife emerging out of the grave and threading through the house keyhole into the bed and around the bodies of her husband and his second wife.

With the audience carefully seated to face the podium, the Gallery became a special place in which the visiting poet could reveal the poem as a finished and, ideally, dazzling object. Such work gave the immediate world a refreshingly alive sense of shape as well as connection with some sense of poetic tradition. Orphic-like, the poet was back from a journey into some private comedy, heaven, or hell. The act of reading was similar to a religious act of sanctification.

As an audience, whether awestruck, bored, or occasionally a mixture of both, we were critical witnesses to the poet's achievement. As creative writing students, we found the experience much more personal. The reading series gave our own work an immediate sense of public possibility. We could hear the work of others and sense its value or lack of value to our own work and lives. The presence of published poets further built the possibility of becoming published, successful, known, and going on a college tour, still a phenomenon in those days. Equally important, the last reading of the semester involved the students. Each of us was allowed to read for five to ten minutes from our own work to what was usually a big Gallery Lounge audience. As scary as those occasions could be, reading from behind the podium in front of those rows of people gave many of us our first public identity as poets, as well as an experience of that Orphic tradition. That experience, though personally crucial, was a mere fragment of what was beginning to occur in the Bay Area.

As long as I have been aware of the local poetry situation, two branches of writer-workers have existed. One branch includes those who are essentially writers of texts; for them what is written for the page is a form of poetic sacrament. The content might arrive from a variety of sources, but its final presentation as a book is crucial. David Hazelwood of Auerhahn Books and Graham Mackintosh (who would probably not like to be thought of as religious) of White Rabbit Press were the two printers essential to the creation of this tradition that began to flourish in the late 1950s.

Implicit to the tradition is the notion that the purest possible embodiment of the poem is engaged through exceptionally skilled typography and design. The choice of type, the spacing, the use of particular elements, the choice of paper and ink-all are considered crucial to the movement, the shape, the music, and/or the voice of the poem. If the printing process is abused, the poem is muddied. This obsession with printing, at least initially, was not meant to be confused with preciousness or false elegance. The printer was just as physically engaged with the work as was Charles Olson's image of the poet in "Projective Verse." Syllable by syllable, he was constantly dealing with the question of SPACE. In the working dialectic between the poet's manuscript and the total resources of the printer, a book of poems could reach its most powerful realization.

This particular emphasis on the making of the book, the poem as sacred text, was clearly not shared by every poet and publisher. City Lights Publications probably most notably represented the antithesis of this position. From the start of the Pocket Book Series, Lawrence Ferlinghetti clearly wanted to make the poet's work as inexpensively and universally available as possible. His was a populist intention—the book as a momentary depository for the poem on the way to the people. Books, in that sense, are staked on an oral or spoken-and-sung concept of writing, where the ideal poem becomes a provocative part of the public's imagination and memory. Certainly that kind of vision made it possible for a copy of Howl or Gregory Corso's Gasoline or Ferlinghetti's Coney Island of the Mind to end up in my back pocket in 1958. 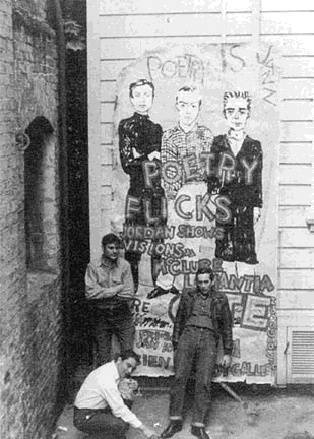 On the other hand, books from White Rabbit by Jack Spicer or Robert Duncan, or books from Auerhahn by Michael McClure, Philip Lamantia, or Charles Olson were unlikely to be accessible through the same local bookstore route. Not until I went to State did I find the work of these poets in the library in Special Collections in the Humanities section, then overseen by Robin Blaser, a member of the circle around Jack Spicer and White Rabbit Press. The assumption, I believe, was that the audience for the poetry would find its way to the books (which usually meant being a friend, being on special subscription lists, or going to a collector's store specializing in poetry), as opposed to the populist approach. 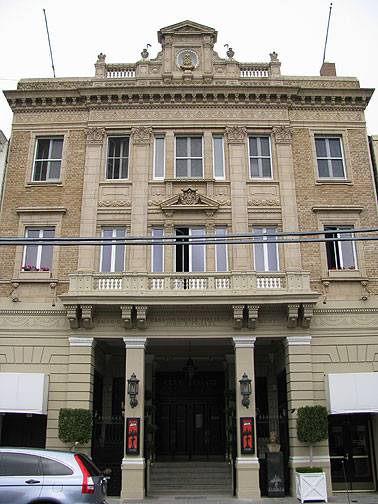 This division between sacred and populist was also mirrored in how and where poetry was performed. In the 1950s most of the writers published by Ferlinghetti thrived on public engagement—Kaufman and Ginsberg on top of the crates on Grant Avenue; Ferlinghetti, Rexroth, and Kenneth Patchen reading to jazz in the clubs and making recordings; and the joint readings that would fill Fugazi Hall in North Beach. It's difficult to imagine Spicer, Duncan, or Blaser reading or even desiring to read in similar circumstances. They read in formalized situations—at State or on KPFA, Berkeley's public radio station, but rarely in a totally open public format. As attractive as the writing could be, the poems were being written to confirm a spiritual space, one that was shared ideally by a "community of poets," which, I believe, was perceived as separate from the very community the more populist poets were trying to reach.

These two separate traditions had a big bearing on the making, publishing, and performing of poetry in the Bay Area in the 1960s and on into the 1970s. In this period a curious mesh occurred between both traditions. The poets, the printers, and the poetry wavered between powerful public commitments and retreats in spiritual or, some might say, aesthetic separation. The struggle was clearly heightened by the fact that the 1960s turned out to be much more explosive than any decade since the 1930s. Events were so powerful that poets, poetry, and the processes of publication and performance could not help but be radically altered.