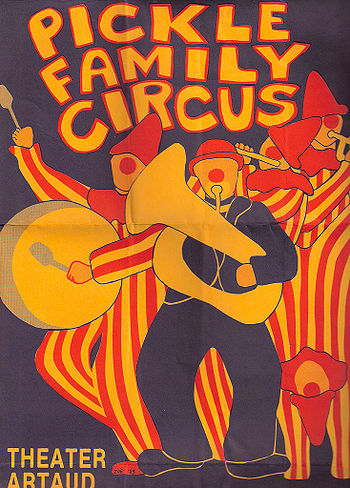 The Pickle Family Circus began in San Francisco in 1974 as a small but revolutionary circus that would entertain audiences throughout the West Coast for the next two decades, and more importantly challenge many of the traditional notions of the operation and presentation of the circus throughout both the United States and the world.

The Pickle Family Circus grew out of a broader theatrical movement in San Francisco that began with the San Francisco Mime Troupe in the late 1950s. Ronny Davis founded the troupe as an offshoot of his Actor’s Workshop, a group that was loosely affiliated with the city’s Beat movement. The Mime Troupe grew to become a driving force in the “guerrilla theater” movement of the 1960s. This movement was characterized by biting political and social satire, and highly accessible performances in public spaces. The group famously performed without a permit at Lafayette Park on August 7, 1965, resulting in arrests and a lawsuit that ultimately led to the opening of the parks for public performances.(1)

Three of the founding members of the Pickle Family Circus, Cecil Mackinnon, Larry Pisoni, and Peggy Snider, had been part of the San Francisco Mime Troupe, and they brought the progressive, democratic spirit of guerrilla theater to their new venture. Larry Pisoni taught a number of members of the San Francisco Mime Troupe to juggle, including Michael Christensen, who would go on to become the lead clown in the Big Apple Circus.(2) The Pickle Family Circus was among the first circuses formed under what would be termed the “New Circus” movement of the 1970s and 1980s, of which New York’s Big Apple Circus, and later Cirque du Soleil, were a part. The New Circus movement was characterized by a smaller, more intimate one-ring format, and an absence of animals in the act.(3) The more intimate one-ring structure brought the performers closer to the audience, and allowed for greater interaction between them. Although not nearly as overtly political as its guerrilla theater roots, the Pickles nevertheless continued to exhibit political undertones in both performance and business. 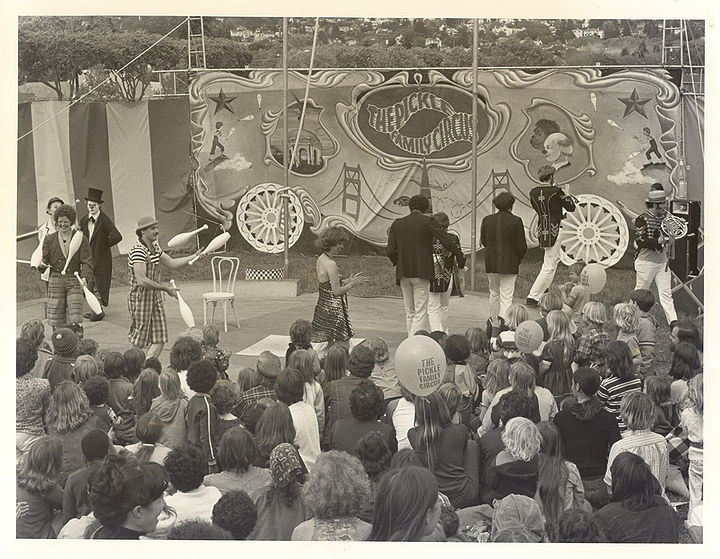 Pickle Family Circus in action in the 1970s.

The Pickle Family Circus strove to be a democratic circus not only in its audience interaction, but also as an organization. The circus operated under the philosophy that each member of the circus ought to make the same wage, and that each performer would have a role in the offstage management in the circus, and vice versa. Nearly every performer in the circus also participated in the business of running a circus, and likewise nearly every member of the circus participated in the “Big Juggle” finale of every show. In place of the ringmaster of a traditional circus, the Pickle Family Circus acts were overseen by the clowns. In the 1970s, it was three clowns in particular who ran the show: Larry Pisoni (Lorenzo Pickle), Bill Irwin (Willy the Clown), and Geoff Hoyle (Mr. Sniff).(4) Furthermore, the Pickle Family Circus booked its performances in coordination with various local community organizations, ensuring that proceeds from its shows’ venues would stay within the community, rather than the singular focus on profits that tended to drive the larger circuses. The circus had its offices and practice space at 400 Missouri Street in the Potrero Hill neighborhood, where many of its members lived.(5)

The three lead clowns, in addition to several other members of the circus, were initially funded through the Comprehensive Employment and Training Act (CETA). CETA was passed as part of the government effort to support the arts in the midst of the recession of the early 1970s.(6) The act was not the first of its kind, as during the New Deal the Federal Theatre Project financed a variety of vaudeville performers including the Works Progress Administration Circus in New York.(7) This development served as perhaps somewhat of an ironic twist, given that the circus had its roots in the fervently anti-establishment Mime Troupe. However, such programs were few and far between, and in 1979 the CETA program ended, contributing to the departure of its three lead clowns over the next decade. Thus it was federal funding which propelled the circus for much of its prime. 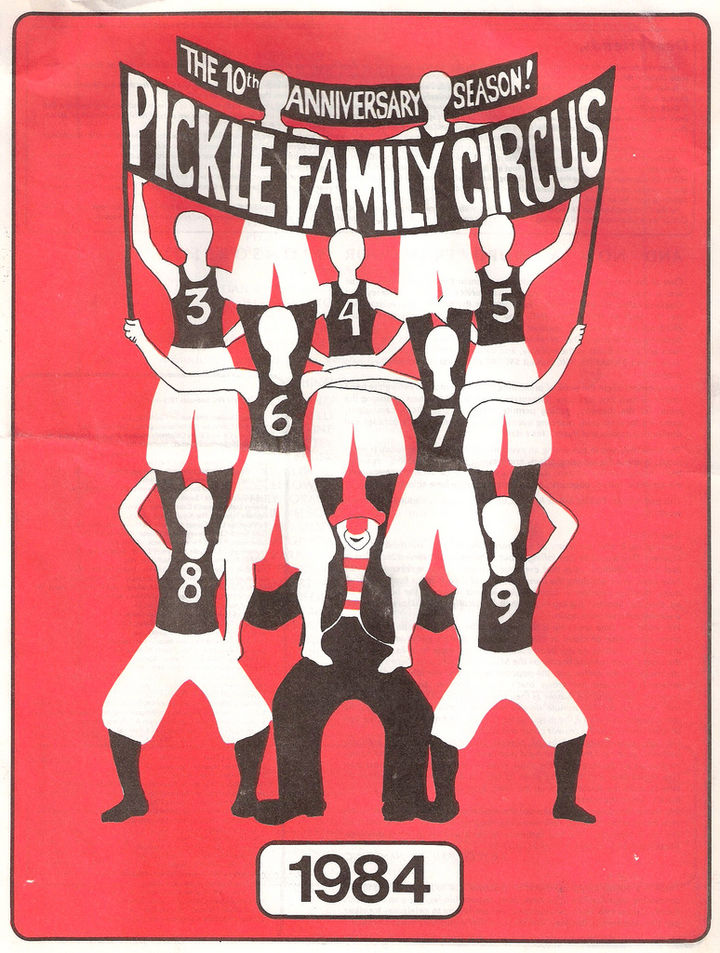 In 1984, two members of the Pickle Family Circus, Wendy Parkman and Peggy Judy Finelli, founded the San Francisco School of Circus Arts, known today as the Circus Center.(8) This center furthered the Pickle commitment to involving the community in its ventures, and continues to this day as a hub of training for the circus arts for both amateurs and professionals.(9)

Co-founder Larry Pisoni, the last of the original lead clowns, left the circus in 1987, and unfortunately the circus went into bankruptcy in 1992. However, its legacy has been cemented both in San Francisco and throughout the circus community. The Circus Center continues to put on annual performances under the name the New Pickle Circus in the city. The influence of the Pickle Family Circus on Cirque du Soleil has not been limited to an indirect artistic and organizational one, as no less than seven Pickle performers, including lead clown Geoff Hoyle, have made their way to the French Canadian circus that dominates the circus world today.(10) The Pickle Circus also pioneered the use of the circus as a narrative art form, as most of their clown routines sought to tell a story. Following the tradition of earlier comics such as Charlie Chaplin, these stories often served as commentary on the conditions of workers and the plights faced by the “everyman.” This tradition has continued in the narrative format of Cirque du Soleil, though artists such as Hoyle have expressed concern that the storylines have become abstract to the point of meaninglessness.(11) For the Pickles, their characters were underdogs who did not understand the existing hierarchies in which they found themselves, and sought to rebel against authority in their own small ways, even if only a pie to the face of an authority figure. In the previous centuries, the circus was largely the venture of businessmen who profited greatly at the expense of their oft-mistreated workers and animals. The Pickles helped to change that, and create an institution that was run by the people, for the people.