Philo Farnsworth and the Invention of Electronic Television

Originally written as a Masters Thesis, this is the seventh of a sequence of pages adapted from the full thesis. For the bibliographic references in the text go here. 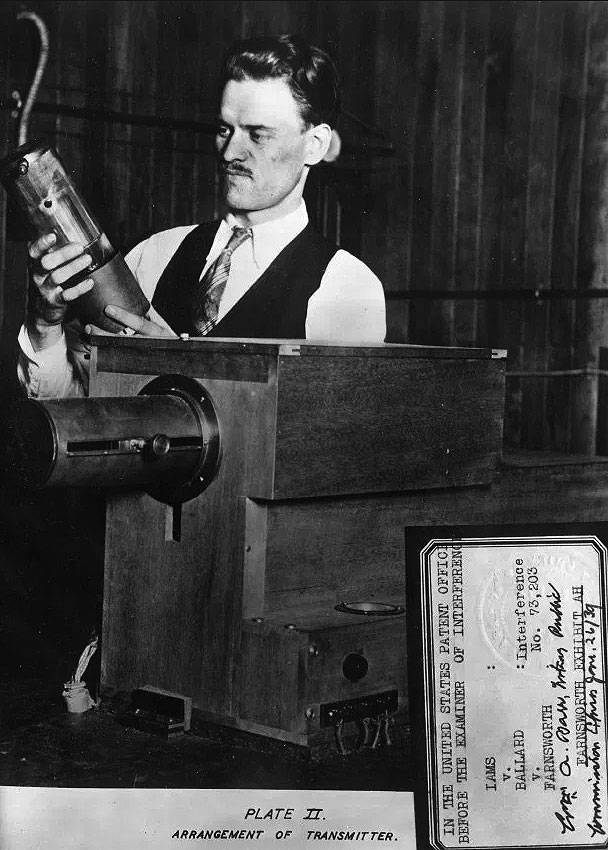 Philo Farnsworth with television transmitter in 1927, part of a patent application.

Philo Farnsworth was a true inventive genius. He was born on a farm near Beaver City, Utah, in 1909. His father was the Mormon bishop of Beaver City. By the age of six Farnsworth stated that he was to become an inventor. When his family moved to Idaho in his early teens Farnsworth became fascinated with the family's Delco electric generator, which he kept in good running order by disassembling and reassembling the unit at every opportunity. He applied the generator to new applications, such as an automatic washing machine. When Farnsworth entered high school he quickly absorbed all the institution had to offer in the way of science and mathematics, surpassing older students as well as his teachers. One year later, at the age of fifteen, Farnsworth wedding the concepts of the photocell (for the camera) and the cathode ray tube (for the picture tube), thereby conceiving a full-blown system for electronic television (Everson, 1949).

The television systems under development in the early 1920s used a mechanical scanning disk to translate images into electrical signals, and Farnsworth's ideas about an electronic scanner were truly original. Farnsworth continued to work on the theoretical details of his system, but lacked the money to build a prototype. In 1926 he met George Everson, a San Franciscan who was travelling around the west collecting for a charity. Farnsworth impressed Everson with a confidant and enthusiastic description of his idea. From those early conversations Everson recalled, "His easy discussion of the technical aspects of his proposed system disclosed a grasp of mathematics that was phenomenal considering his lack of formal training. During the conversation Farnsworth marshaled an astonishing array of authorities to his defense and spoke with familiarity regarding scientific works of which the average college science student was hardly aware" (ibid). Everson arranged for Farnsworth travel to San Francisco to meet with William Crocker, a banker who invested regularly in new ventures. Again Farnsworth's enthusiasm and depth of knowledge proved impressive and Crocker agreed to back the venture (Everson, 1949; Morgan, 1967).

Farnsworth was installed in a crude laboratory at 202 Green Street in San Francisco, near Telegraph Hill. He brought in his new wife, Pem, and his friend, Cliff Gardner, from Utah. Pem helped Farnsworth go over complicated mathematical considerations and Gardner, although he had no training as a glass blower, developed an extraordinary talent to fabricate the oddly shaped tubes that Farnsworth needed for his electronics scanner, or "image dissector". Farnsworth drew heavily on local talent for the research effort. Russel Varian, an electrochemist recently graduated from Stanford, worked on the project for four years. He experimented with new phosphors for the picture tube and with new oscillators to generate electromagnetic waves for transmission. Robert Humphrey was brought in for wiring and Thomas Lynch as a machinist. Farnsworth was visited and encouraged regularly by local electronics luminaries including Leonard Fuller, William Hanson, Frederick Terman, and Ralph Heintz (Morgan, 1967). Heintz worked with Farnsworth "from the very beginning", visiting his laboratory "several times a week." "I helped them and they helped us" (Heintz, 1982).

RCA was also working on a television system at the time. When they heard news of Farnsworth's activities they sent Vladimir Zworykin, who was heading up their research effort, to visit Farnsworth's laboratory. Zworykin was very impressed with what he saw, particularly with Gardner's oddly shaped tube envelopes, which glass blowers at RCA had told him were impossible to fabricate. Farnsworth's work convinced Zworykin that an electronic method of image scanning was possible, and on his return to RCA he set out to develop his version of the device, the "ionoscope". Farnsworth achieved the first all electronic transmission of a television image in 1927, but was not able to patent the system until 1930. Farnsworth was greatly helped in establishing a solid patent position by Donald Lippincott, who had become a patent attorney after his stint as Chief Engineer for Magnavox (Lippincott was also the patent attorney for Heintz and Kaufman). Because of Farnsworth's strong patent position, RCA was forced to seek a licence for the ionoscope. Despite legal victories however, Zworykin received much of the credit from the media for the development of television. As Ralph Heintz (1982) put it, "Phil was so frustrated, because they gave Zworykin credit for his invention. The press was loath to give credit to a poor little guy like Phil Farnsworth [a self-taught Mormon from Idaho]. Zworykin, of course, was a big shot, he was a Ph.D and he was at Westinghouse [sic], and they just snowed Phil under." 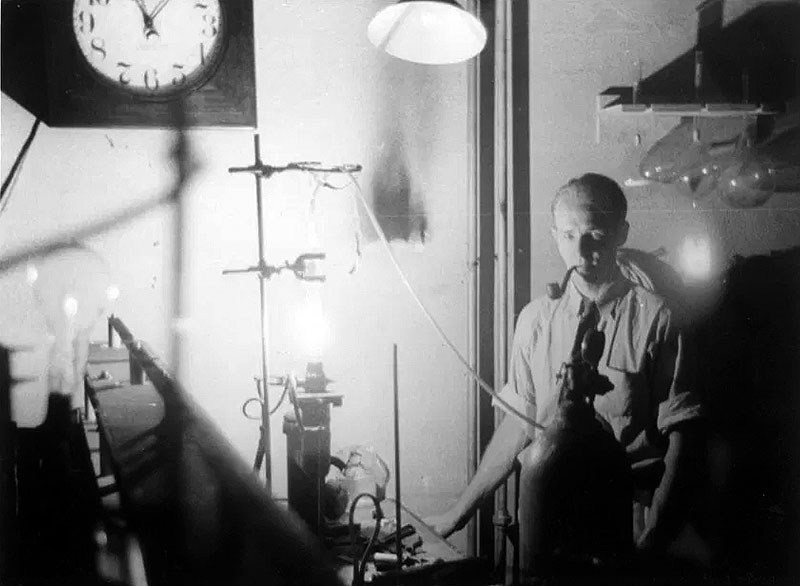 After many more years of research, and patent battles between Farnsworth and RCA, in 1941 television was finally ready for market. However, World War II interrupted plans when the government declared a blackout for commercial television.

In 1931, Farnsworth's television system had been perfected to the point that it was ready to go into commercial production development. The manufacturing rights were bought by Philco, then the largest home radio manufacturer in the United States. The company brought Farnsworth to Philadelphia to help with manufacturing development. In 1934 Farnsworth demonstrated his television system for 10 days at the Ben Franklin Institute. His system drew thousands of spectators and garnered worldwide attention. Farnsworth went on to become Director of ITT's research laboratories (Morgan, 1967).

Farnsworth's ties to the electronics and financial communities in the San Francisco Bay Area remained strong. When he set up Farnsworth Laboratories in 1933 in Philadelphia to pursue research avenues that he had bypassed in his single-minded efforts to perfect a television system, this new venture was funded by William Crocker. Significantly, when Farnsworth invented the cold cathode tube, or "multipactor," its first public demonstration was conducted by Ralph Heintz at the plant of Heintz and Kaufman:

The multipactor tube was hailed by scientists and engineers as a major development in electronics. The first public demonstration of the tube was given in San Francisco at the plant of Heintz and Kaufman, with a power multipactor which Phil had sent...for the purpose. Ralph Heintz placed it in the transmitter circuit of the Globe Wireless station. Members of the Signal Corps of the Army, members of the faculty of Stanford and the University of California, and other scientists around the Bay region, were invited to witness the showing. When all were gathered, the transmitter was turned on and the tube set into operation. There were no visible signs of anything going on within the tube, or without, yet when Ralph Heintz took an electric light bulb on the end of a stick and placed it within the field of the tube's power, the radiating power lighted the incandescent globe, proving that the multipactor was operating and giving out the power expected of it (Everson, 1949).