Difference between revisions of "Peoples Temple" 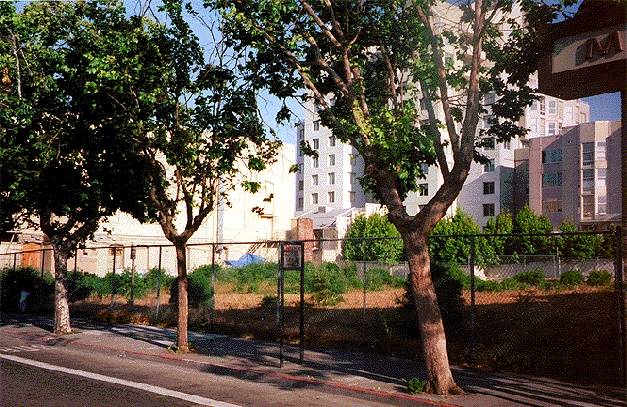 This vacant lot at 1859 Geary was once the site of The People's Temple.

The bleak, desolate vacant lot at 1859 Geary, between Fillmore and Steiner, is all that remains of the San Francisco headquarters of the late Reverend Jim Jones and his People's Temple. Rev. Jones, as you may remember, was the leader of a generally well-respected San Francisco cult who, on November 18th, 1978, convinced over 900 followers to commit mass suicide.

Jones moved his cult from rural Northern California to San Francisco in the early '70's, where he gradually began to acquire political clout. His beliefs were not all that weird, at least by San Francisco standards; Jones espoused a share-and-share-alike brand of primitive communism based on the gospels, while decrying the greed and materialism of American culture and forging political alliances with leftists. Though his creed was sensible -- and far closer to the ideals and practice of Jesus Christ than most American churches ever dream of getting -- Jones's personality had a paranoid, authoritarian streak that worsened over the years. He craved absolute love, absolute worship, absolute obedience, and eventually reached the point of insisting upon it, at no matter what price.

During his San Francisco period (the mid-'70's) Jones became a fixture on the local political scene. He sent his followers out as precinct workers for the Moscone for Mayor campaign, and when Moscone eked out a narrow victory, Jones collected his debt by getting himself named commissioner of housing. Then, during the 1976 presidential elections, Rosalyn Carter's advance team, hearing that Jones's grassroots organization had made the difference in Moscone's victory, scheduled a meeting between the cult leader and the future First Lady.

At the same time he was developing political clout, Jones was showing signs of the Unfathomably Savage Weirdness that would later claim nearly a thousand lives. As far back as 1973, Jones and his inner circle had developed a fantasy-cum-contingency-plan for mass suicide in case the People's Temple ever found itself about to be destroyed by its enemies. Jones made it clear that if and when the mass suicide took place, he, like Ishmael, would remain behind as sole survivor so as to explain the event.

In 1975, Jones conducted a bizarre experiment at the People's Temple headquarters on Geary Street. Jones announced that an excellent wine had been vinted from grapes grown at the Temple's former Redwood Valley headquarters, and that all those present ought to imbibe, despite the Temple prohibition against alcohol. The Reverend circulated among his flock, making sure that all were drinking. Then he called for attention and grimly announced that the wine contained a potent poison; everyone in the room would be dead in less than an hour. By killing themselves en masse, Jones explained, they would be protesting the world's inhumanity.

How did Temple members react? About the same way that citizens usually react when their government declares war. Nobody rebelled; nobody called out for an antidote; nobody stood up and disputed the necessity of mass death. That dress rehearsal had to do, as the song goes, until the real thing comes along. The real thing came along in November, 1978. Jones and most of his followers had moved to Guyana to escape the greed and corruption of America. They started a communal village, Jonestown, and kept themselves busy growing food and improving the settlement's primitive infrastructure. But their leader was going from weird to worse. Convinced that the U.S. government was plotting against him -- and he was probably right, given that any openly pro-communist leader of Jones's persuasive abilities was bound to quickly attract the attention of CIA, FBI, and quasi-official red squads--Jones turned into a full-fledged nut case.

On November 18th, 1978, Congressman Leo Ryan led a team of investigators and journalists into Jonestown ... and all hell broke loose. After their disastrous visit, Congressman Ryan and various aides and journalists were mowed down on the airstrip, just before they could board their plane, by People's Temple gunmen. (Some, including Tim Reiterman, survived to tell the tale.)

I'd like to thank Dad because he's the only one who stood up for me.

This is nothing to cry about, this is something we could all rejoice about ... Jim Jones has suffered and suffered ... He is our only God.

I'd like to go for socialism and communism. I thank Dad very much.

We've set an example for others. One thousand people who say: we don't like the way the world is. Take our life from us ... We didn't commit suicide. We committed an act of revolutionary suicide protesting the conditions of an inhumane world.

Just because Jones was paranoid, sources say, doesn't mean that they were not out to get him. Some investigators are convinced that Jones was the stooge of a CIA mind-control and/or psychological warfare project, designed to discredit leftists while exploring various mind-control and mind-disabling techniques. Suspicion focuses on members of the Jonestown medical team, who were in a position to administer Langley-developed potions to the Reverend Jones. In all fairness, it must be admitted that the evidence offered in support of this theory is rather skimpy.