Note: This is an excerpt from a revised and excerpted version of a document prepared in support of the application by the Dogpatch neighbors to receive historical district status. 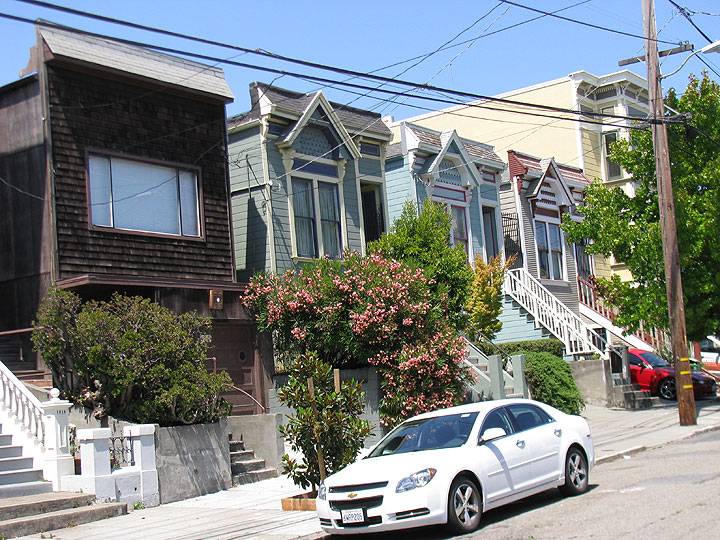 One of the clusters of Pelton cottages, this on Tennessee Street, in Dogpatch.

Finally, Dogpatch is significant under Criterion C as containing the largest concentration of dwellings based upon the architectural patterns of local architect John Cotter Pelton, Jr. The future architect was born on July 24, 1856 in San Francisco, the second child born to John and Amanda Pelton, prominent San Francisco pioneers.[66] In 1875 Pelton, Jr. began working as a draftsman in the offices of Wright & Saunders, a large and well-connected firm that designed and built some of San Francisco’s most substantial warehouses, factories and office buildings.[67] Pelton, like most other Victorian-era California architects did not receive academic architectural training, but instead learned his profession as an apprentice.[68] From 1877 to 1879 Pelton worked as a draftsman on Old City Hall, in the offices of Augustus Laver.[69] In 1879, Pelton opened his own firm in partnership with Edward Hatherton, another draftsman from Laver’s office and San Francisco City Architect during the late 1880s.

Hatherton & Pelton opened an office at 330 Pine Street, in downtown San Francisco.[70] Despite the economic depression brought on by the collapse of the Comstock Lode silver fortunes, the 1880s were busy years for Pelton’s office. Hatherton & Pelton designed at least 30 residential projects in San Francisco between October 1881 and March 1886, the period in which he compiled the Cheap Dwellings Series. The bulk of his projects were commissioned by upper-middle class residents of the Western Addition and Pacific Heights. Pelton also earned commissions outside San Francisco including several in Woodland, Alameda and other suburban and provincial towns. From 1888 until 1890, Pelton worked alone in Los Angeles and in 1891, he returned to San Francisco. From 1891 to 1897 he worked out of an office in the Telephone Building, at 216 Bush Street. Pelton was part of a consortium of businessmen and developers, known collectively as the Belvedere Land Company, which had platted Belvedere Peninsula in Marin County as an exclusive weekend retreat. Pelton designed several of the earliest and most prominent houses on Belvedere, including Loxley Hall, at 440 Golden Gate, a tremendous Classical Revival residence completed in 1895. Pelton appears to have done little work in San Francisco during this period with one notable exception; a row of six, two-story, Tudor-revival frame houses on the corner of California Street and 2nd Avenue, in the fast-growing Inner Richmond district.[71] After the Earthquake and Fire of 1906, Pelton was one of several architects who took part in rebuilding downtown and the South of Market district. One of the most notable examples of this work is a small terra-cotta clad skyscraper located on the corner of Second and Natoma Streets. This building, which still stands, was designed in 1907 for the firm of Knickerbocker & Bostwick and is now known as the Westinghouse Building.[72] Another surviving Pelton skyscraper is a prominent Sullivanesque building located at 140-42 2nd Street. Although Pelton maintained his primary residence in San Francisco, he continued to work on projects in Los Angeles. An article published in Architect and Engineer in 1910, featured a series of innovative, patented reinforced-concrete bungalows reminiscent of the contemporary work of Irving Gill, Pelton designed for clients in the Southland.[73] John Cotter Pelton survived his illustrious father by only a year and a half, passing away in 1913.[74] 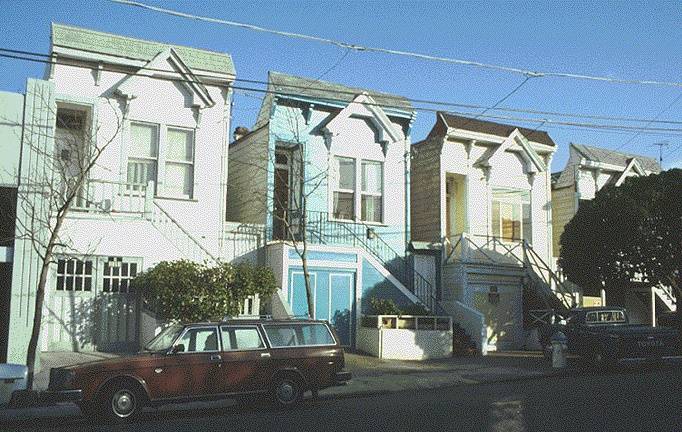 Pelton Dwellings in Dogpatch (lower Potrero Hill) date to 1887. Plans for Pelton's "Cheap Dwellings" as they were called, were used by individuals and contractors all around the city in working class neighborhoods. A contractor, Rees Davis, built these charming houses back to back on Tennessee and Minnesota in 1887. 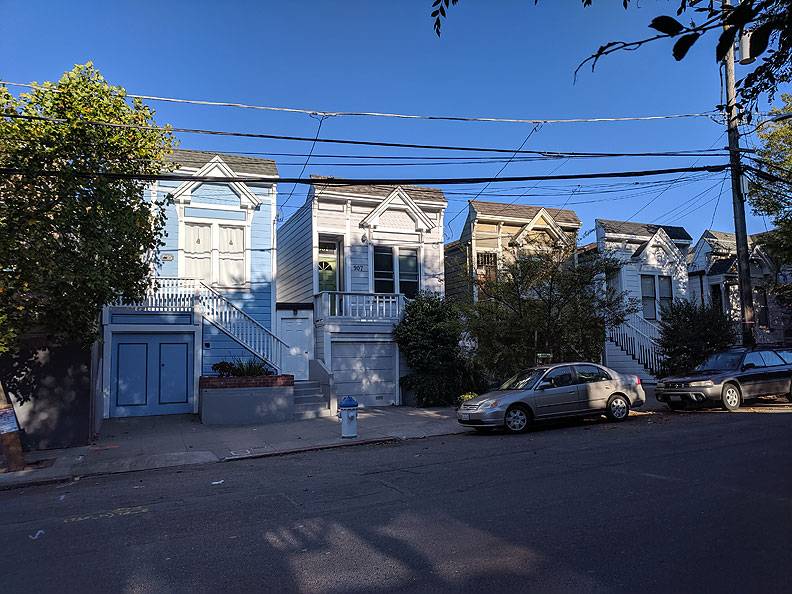 The editor of the San Francisco Evening Bulletin, a daily newspaper that attracted a large body of readership amongst San Francisco’s working-class and immigrant populations, stated that the “Cheap Dwellings” series was initiated in response to a perceived need for “handsome, commodious, and economical” cottages for “small families of moderate means.”[75] The editor of the Bulletin described Pelton in the introduction of the series as a “well-known” young architect, who “carried off the prize offered by the Mechanics’ Institute for the best plans of a mechanic’s dwelling.” Apparently, Pelton’s social conscience and proven abilities in designing low-cost cottages motivated the Bulletin to feature Pelton’s designs in an unprecedented effort to assist the city’s working classes construct adequate housing. The Bulletin’s motives, like Pelton’s, were most likely motivated by a mixture of altruism and shrewd marketing. As the paper itself noted, every Saturday edition that included one of Pelton’s plans quickly sold out. Pelton may or may not have been paid for his work for the Bulletin, but he seems to have benefited from the publicity his designs engendered.

Nevertheless, Pelton’s Cheap Dwellings series did respond to the need for competently designed industrial workers’ housing. During the 1870s, expanding trolley networks were allowing working-class San Franciscans to purchase cheap, unimproved land within commuting distance of their workplaces for the first time. The editor of the Bulletin summed up the situation:

The time for the presentation of such plans is an auspicious one. In the city, street railroads are reaching out to the suburbs, making available the unimproved outside lands which can be bought at prices within the reach of all persons.[76]

This factor, combined with a twenty-percent rise in real wages between 1870 and 1890 led to increasing interest in home ownership amongst the working-class San Franciscans.[77] The homes constructed by working-class people in the industrial areas and peripheral neighborhoods were quite modest and construction costs rarely exceeded $2,000. According to the Bulletin, most architects in San Francisco were unwilling to draw up plans for houses that cost less than this amount, leading to less-than happy results:

It frequently happens that the person contemplating building and thus financially situated, finds that the cost of the plans and specifications of such a cottage as he needs and can afford to construct cuts considerable of a hole in his building capital...The alternative which presents itself and which is frequently adopted, is to either draw plans himself or accept the plans of a carpenter or builder...In either case, he usually finds that he has builded (sic) for himself a house wherein there has been much waste of material, no economy of space, imperfect arrangement and many omissions, making the house which ought to be a “thing of beauty and a joy forever,” an eyesore and an architectural abnormality.[78]

Pelton’s “Cheap Dwellings” series represented the first and only known instance in which a California architect published free plans for workers’ dwellings in a daily newspaper. The closest national precedent to Pelton’s work was a series of plans published in Scientific American’s Architects and Builder’s Edition. Like Pelton’s work in the Bulletin, the plans published in the Scientific American featured the information one would need to construct the dwelling: plans, elevations, sections, specifications and estimates.

Between April 1880 and November 1883, the Bulletin featured one of Pelton’s cottage designs on the front page of the Saturday edition every two or three months. Each of Pelton’s installments were preceded by the editor’s “Introdution.” In the Introduction the editor introduced the current month’s design, quoted positive reaction to previous installments and listed locations of places where cottages based on Pelton’s plans were under construction. The “Introduction” was followed by “The Architect’s Explanatory Letter.” In this section, Pelton described his design, his motivations for producing the particular design, architectural theory, the proper use of ornament and other relevant issues. Pelton also discussed more prosaic topics such as site selection, how to dig a latrine and how to efficiently arrange furniture in a small house. Following the text were the actual plans and specifications. Pelton made them as detailed as possible to facilitate their interpretation by any “competent builder” or homeowner. Pelton maintained that enough information was included so that virtually anybody could build a “Cheap Dwelling” without working drawings prepared by an architect. The editor of the Bulletin agreed and in 1880 he wrote:

The plans and specifications and statement of materials are so intelligently drawn that the inexperienced in such matters can easily understand them, and they are so complete that the person contemplating knows beforehand just what is needed in the way of materials, labor and expense.[79]

The first installment of the “Cheap Dwellings” series was published on April 3, 1880. This three-room cottage was designed for the narrowest marketable lot width; 20’ and its cost, with all the bells and whistles, came to $585.00. By omitting the indoor water closet, the hip roof and the picket fence, one could, according to Pelton, build the cottage for closer to $500.00. Either way, this was a very reasonable price for a single-family urban home in 1880.[80] Pelton’s next installment in the “Cheap Dwellings” series appeared in the Bulletin on May 8, 1880 and it is this design that appears in the design of sixteen (originally twenty-six) existing dwellings in Dogpatch. The “Four Room Cottage,” like its predecessor, was designed for a 20’-wide lot. However, it was somewhat larger at 772 square feet. Pelton displayed his interest in designing flexible interior space. Although the front room was designated as a parlor in the plan, Pelton wrote that it could just as easily be used as a bedroom. Similarly, the oversized closets between the dining room and the bedroom could be used to install a staircase should the homeowner decide to jack up the cottage and insert another story.

Although designed to be very inexpensive, the “Four-Room Cottage” was also meant to be attractive and stylish. The plans depict scroll-sawn, Eastlake-style door and window surrounds and a heavy projecting cornice with brackets. Pelton estimated that the “Four-Room Cottage” would cost $854.25 to construct as designed.[81] He discussed how the decorative elements could be omitted to reduce the overall price but cautioned against parsimony. As it turned this small cottage design was popular with working-class San Franciscans, based upon the high number of examples that survive today. Although it will never be known how many were originally built, a thorough examination of San Francisco’s Mission District, Potrero Hill and Noe Valley neighborhoods reveal the existence of a substantial number. However, Pelton’s cottage designs were not exclusively used by individuals seeking to build homes for themselves as the architect had originally intended. As we have seen, Pelton’s “Design No. 2 for a Four-Room Cottage” was used by the Santa Fe Land Improvement Company and private developers to construct rows of identical cottages for industrial workers. 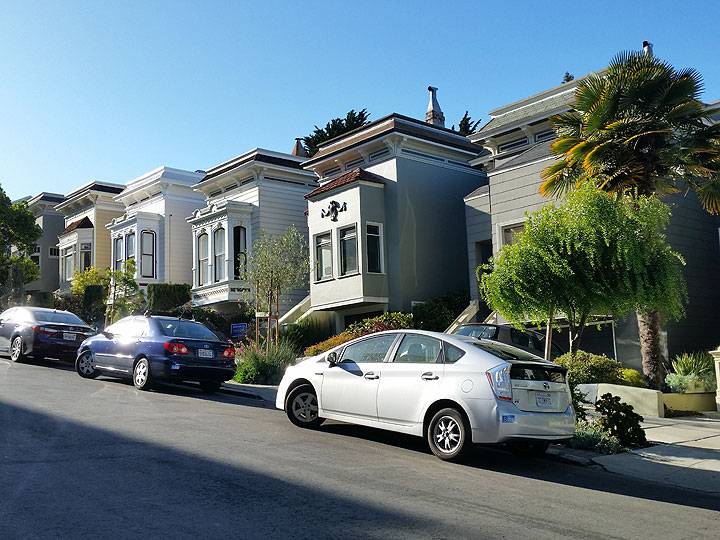 [68] Richard Longstreth, On the Edge of the World, Four Architects in San Francisco at the Turn of the Century, (Berkeley: University of California Press, 1998), p. 80.