Patient No More: 1977 Occupation of Federal Offices in San Francisco

This content is reposted with permission from the website at the Longmore Institute at San Francisco State University. 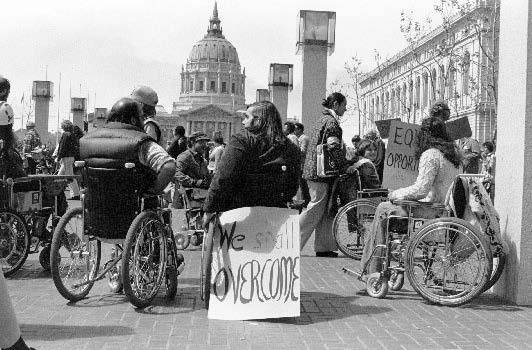 Protesters gather at UN Plaza outside federal building in San Francisco on April 5, 1977.

This is the story of a remarkable, overlooked moment in U.S. history when people with disabilities occupied a government building to demand their rights. Known as the “Section 504 Sit-In,” the protest profoundly changed the lives of people with and without disabilities, and paved the way for the Americans with Disabilities Act (ADA) in 1990.

On April 5, 1977, American people with and without disabilities showed the world the power of grassroots activism. In San Francisco, more than 100 people began a twenty-six day occupation of the Federal Building to insist on getting civil rights. Four years earlier, Section 504 of the Rehabilitation Act of 1973 had made it illegal for any federally funded facilities or programs to discriminate against disabled people. One signature from the Head of Health Education and Welfare (HEW) stood in the way of the law taking effect. People waited and waited. At last in 1977 frustration turned into bold action. A diverse coalition launched protests across the country. San Francisco's occupation was the most significant.

On April 30, 1977, San Francisco's Section 504 occupiers emerged victorious from the longest take-over of a federal building in US history. A national disability rights movement was born. This pivotal moment led to the Americans with Disabilities Act (ADA) signed twenty-five years ago on July 26, 1990.

Occupiers Take the Department Of Health, Education, and Welfare Offices

Demonstrators at ten federal offices across the US demand that President Carter's Administration sign the 504 regulations without watering them down. Sit-ins begin in SF and D.C. San Francisco:A large group enters the HEW offices and over 100 are locked in for the night. Community organizers from Delancey Street the residential rehabilitation program for substance abusers, bring food; Salvation Army provides blankets and mattresses. Washington D.C.: 300 protesters heckle Secretary Joseph Califano to sign the 504 regulations unchanged. Many stay in the HEW office overnight.

San Francisco: After sleeping on the Federal Building floor, over 100 people wake to their first full day of the sit-in. Washington D.C.: The occupiers leave the building — no food or access to medicine and unsympathetic guards made it impossible to stay. Other Cities: Protests fizzle out without community support. 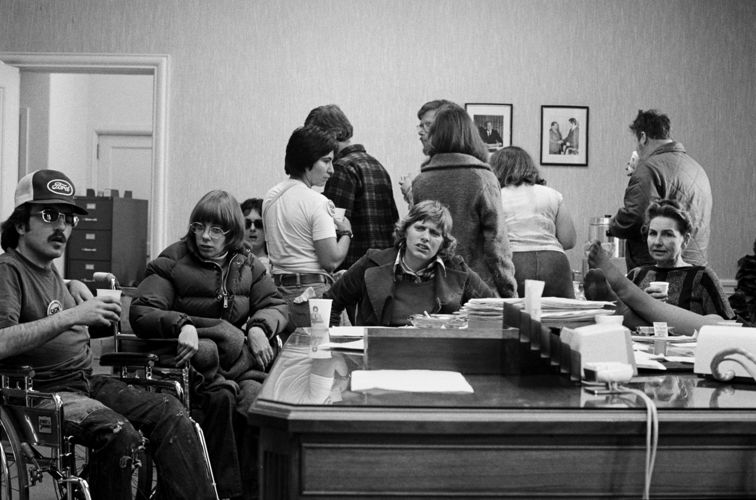 Protesters gather around a cluttered office desk to plan next actions. The HEW offices at 50 United Nations Plaza became the office of the ‘Section 504 Emergency Coalition.’

San Francisco: The San Francisco Chronicle reports that the occupiers are now 150 strong. 504 Coalition issues press release urging supporters to come to the sit-in for most up-to-date information. Hunger strikers remain in high spirits. Occupiers join committees to handle daily tasks inside and duties for keeping the protest going; a routine develops and each day counts.

San Francisco: Easter service held at 10am followed by an egg hunt for occupiers’ children in the Federal Building’s courtyard. US congressman George Miller speaks to occupiers and urges them to remain. California Department of Vocational Rehabilitation Director Ed Roberts, sends a telegram to President Carter. Pay phones are jammed with coins; occupiers can’t communicate with anyone outside.

San Francisco: Protesters give daffodils to arriving HEW staff. Congressmen Phillip Burton and George Miller announce that a semi-official “hearing” will be held inside on April 15th. More than 120 protesters now in the building discuss concerns about the regulations being diluted. Buttercup Restaurant, Brick Hut lesbian cooperative in Berkeley, and Glide Memorial Church donate dinner. Neighborhood pharmacists help with medicines. Channel 7 journalist Evan White commits to telling the protest’s story, reports on his travels downtown in a borrowed wheelchair.

San Francisco: 10:00AM—4:00PM congressmen Miller and Burton hold hearings inside the occupied building by declaring room 406 a “satellite office of Congress.” Individuals from diverse groups give testimony on 504 regulations. SF Chronicle reports that most of the original 150 protesters remain inside. Outside hundreds attend a public rally. Senator Alan Cranston sends telegram of support.

San Francisco: After a long meeting, occupiers elect delegation of twenty-five to go to Washington D.C. to put pressure on Secretary Califano to sign 504 regulations. Concerned for their health, some occupiers leave to join supporters outside.

San Francisco: Conditions get more difficult inside the Federal Building and some protesters report developing body lice and crabs. But food keeps coming and hopes remain high as protesters make plans for going to Washington. SF protest has raised $5,000 to send the delegation, including significant funds from International Association of Machinists (IAM). 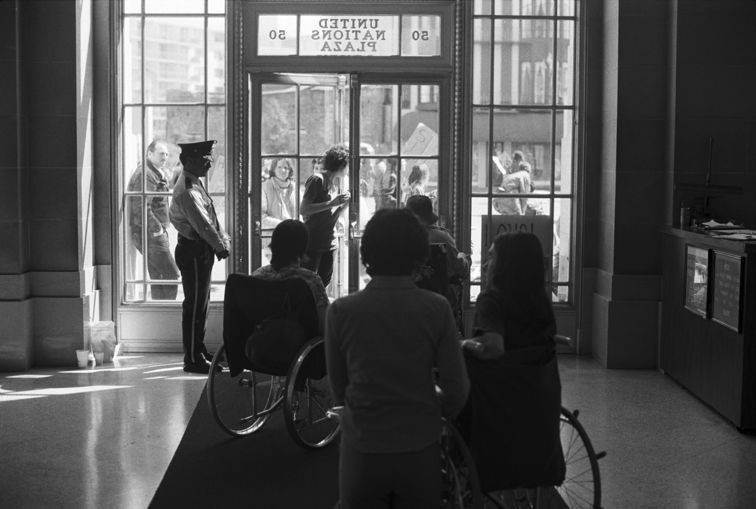 In the lobby of the Federal Building at UN Plaza.

San Francisco: About seventy-five remaining occupiers vow to hold the fort while eighteen of them and seven attendants fly to Washington. Washington D.C.: Newly arrived San Francisco protesters travel in a rented windowless Hertz truck with a hydraulic tail lift to Califano’s house to hold a candlelight vigil until dawn. Most stay at the Lutheran Place Memorial Church, sleeping on foam mattresses on the floor; eat food provided by local Washington IAM.

Washington D.C.: SF delegates lobby outside Carter’s First Baptist Church; President escapes through the back door. Protesters plan rally in front of the White House for next day.

Washington D.C.: Lutheran pastor, the Reverend John Steinbruck invites Carter and Califano to prayer breakfast with the protesters but gets no response.

San Francisco: Over 100 protesters remain inside the Federal Building; dozens of Bay Area supporters continue demonstrating outside. Washington D.C.: SF delegates and over 100 demonstrators march in front of the White House and hold a rally. Parallel events take place in Los Angeles, Dallas, and Hartford, CT.

Califano signs the Section 504 regulations without fanfare. News of success spreads fast; some protesters worry it might be a trick. San Francisco: Protesters are elated; vote to wait for Washington group to return so everyone can leave the building triumphantly together. Occupier Margaret (Dusty) Irvine ends twenty-one day hunger strike. Washington D.C.: Here too news spreads quickly and protesters worry that changes have been made. By end of day, attorneys confirm that Califano did sign the regulations unchanged as protesters had demanded from the beginning.

San Francisco: Protesters clean up the HEW offices; they celebrate one last night in the building together; bonds are strong and not everyone wants to leave; they vow to carry on the disability rights struggle.

San Francisco: Late morning the occupiers leave the building together; to cheers from many HEW employees and federal security staff, they join a large public rally on UN Plaza and toast their victory with champagne. 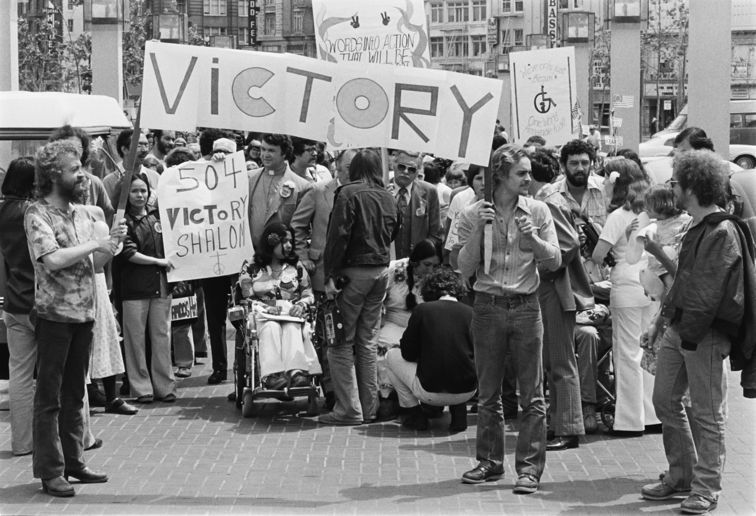 Occupiers and their supporters in San Francisco’s Civic Center Plaza celebrate the signing of the Section 504 regulations.

On April 28, 1977, Joseph Califano, Secretary of Health, Education, and Welfare (HEW), signed the Section 504 regulations. Protesters in San Francisco stayed for two more days to clean up and say good-byes. Everyone was energized by this huge accomplishment; there would be no turning back.

The San Francisco occupiers came from the entire Bay Area, which had attracted many people with disabilities. In fact, Berkeley’s disabled population increased from an estimated 400 in 1972 to 5,000 in 1976. Why?

• The growing Independent Living Movement employed people with disabilities, fostered disability pride, and gave advice for living in the community.
• California had a personal care attendant allowance.
• Good weather and more curb cuts on sidewalks than any other city made it easy to get around.
• Like other immigrants, disabled newcomers found support from people who had already paved the way.
• Everyone who wanted change could find social movements with like-minded people. 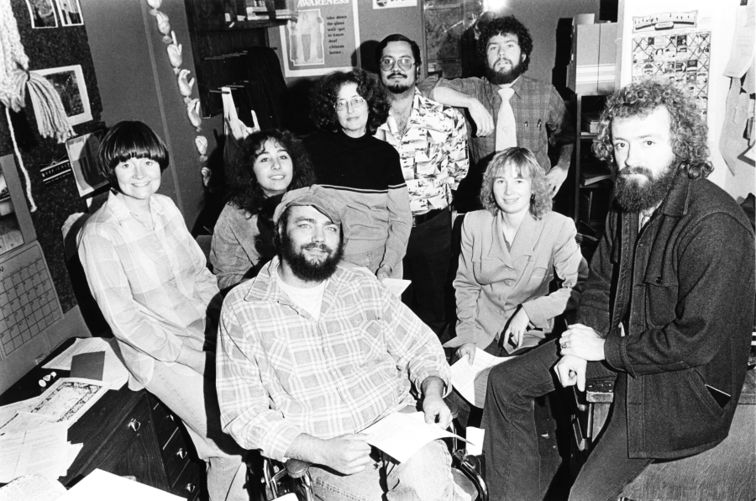 Berkeley's Center for Independent Living (CIL) attracted many people with disabilities. Everyone in this group photo participated in the Section 504 occupation.

When the sit-in began, nobody dreamed they'd be there for nearly a month. Most arrived with nothing. Some risked losing jobs and relationships. For many, this was the first time they had slept away from home. Despite hardships, they also found camaraderie as they talked, played cards, sang, partied, made friends, and fell in love.

The Untold Stories Of The 504 Protests

• Even people who were there cannot agree on how long the sit-in lasted and how many occupiers were in the building.
• A lot of HEW employees supported the protest
• The key role of lesbians and radical organizations like the Black Panther Party is only now beginning to emerge.
• Women wheelchair riders led the San Francisco 504 Protest.
• Many disabled people thought the San Francisco protesters were too radical and believed it was wiser to work within the system rather than against it.
• Some occupiers got past the Federal security guards with relative ease; a few even snuck off for showers or to the beach.
• Deaf people participated in the sit-in but the Deaf community has mixed feelings about the Section 504 regulations because mainstreaming in education threatens Deaf language and culture.

“WE SET THE STAGE FOR THE ADA”
—Organizer Judy Heumann, 20th Anniversary Celebration

Without Section 504 of the 1973 Rehabilitation Act, there would be no Americans with Disabilities Act (ADA). The 1973 Act served as a template for the more comprehensive law passed in 1990. 504 gave ADA advocates evidence that disability rights could benefit many without adding a huge burden on society.

• Because 504 defined disability flexibly and took prejudice into account, the ADA could be about civil rights rather than medical diagnoses.
• By building in ideas such as “reasonable accommodation” and “avoiding undue hardship,” Section 504 ensured that the ADA would always be about compromise.
• After the long wait to have Section 504 signed, those who wrote the ADA made sure that it had to be signed into law within one year.
• Section 504 and the battle to have it signed forged a generation of disability activists who would help draft and pass the ADA.
• Because the Section 504 protests and legislation grouped people with many different disabilities together, there would be one big ADA instead of mini-ADAs for each impairment group.
• The Section 504 protest lit the spark for a national disability rights movement and national disability organizations that could promote and defend the ADA.

Inside his Federal Building office during the Section 504 protest, HEW employee Bruce Lee posts a hand-made sign ‘504 is law now make it reality.'

Thanks to Section 504 of the Rehabilitation Act, people with disabilities have the right to: