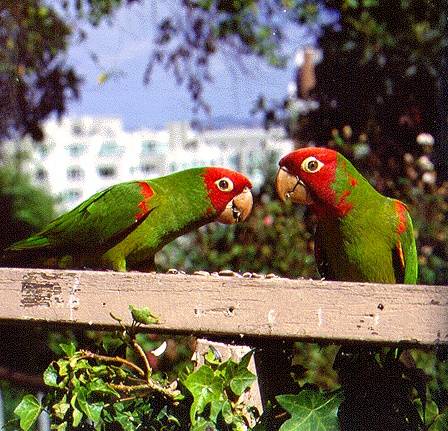 Parrots are among the more exotic non-native species in San Framcisco. These are on Telegraph Hill in the mid-1990s.

The Cherry-headed Conure (Aratinga erythrogenys) averages 13 inches in length. It's mostly green with a red head, red epaulets on the shoulders of its wings and a cream colored eye ring. The bird is known to ornithologists as the Red-masked Parakeet. "Conure" tends to be used more by the pet trade. Conure is an older name for South American parakeets who were once all lumped together under the genus Conurus (meaning cone shaped tail). I usually call them conures because the word "parakeet" tends to cause confusion among people who are not familiar with parrots. Parakeet is a descriptive term for many different small to medium size parrots with long tails. The bird we typically call a "parakeet" in the U.S. is actually a kind of parakeet. That bird's real name is the budgerigar or budgie.

As of this writing (12/14/97) there are 38 birds in the flock: 33 Cherry-headed Conures, one Blue-crowned Conure (Aratinga acuticaudata), one Mitred Conure (Aratinga mitrata) and three Cherry head-mitred hybrids. Both the Blue-Crowned Conure and the Mitred-Conure were wild-caught, legally imported birds. I know this because of a particular type of band, a quarantine band, that they wear on their legs. Of the 24 cherry heads in the flock at the time I first started observing, six wore quarantine bands. Only one of those birds is still alive. It's likely that all the other birds in the flock are native born San Franciscans. 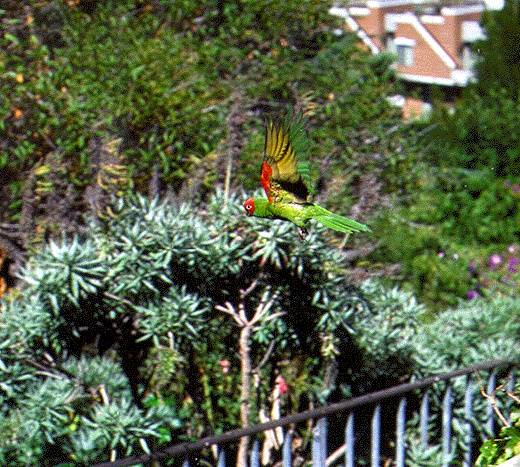