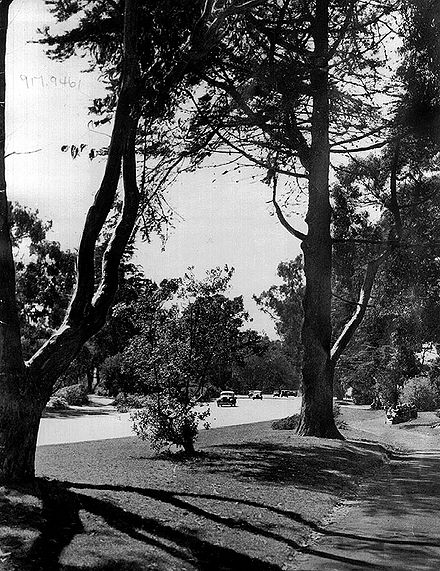 CROSS INTO THE PANHANDLE AND WALK EAST TOWARDS MASONIC--In 1870 when San Franciscans set out to build their park, the 1,017 acres they had chosen were windswept sand dunes much like those which now line the Great Highway. Golden Gate Park was to be a strip of land extending from Divisadero Street west to the ocean with Fulton Street as a northern boundary and Frederick Street as its southern border. But a tenacious group of squatters could not be removed from the easterly reserve and the Panhandle was the compromise.

Under the revised scheme a smaller section of land was set aside for that portion of the park extending east of Stanyan. It was labelled "the Avenue" and served as the carriage entrance to the park. Horse drawn vehicles carrying day visitors from the populated areas to the east would arrive at the Baker Street entrance to the Panhandle and move through its center along a gently curving, tree-lined roadway which led to the Conservatory and other attractions in the park's heartland. With the advent of the automobile, there was no need for a carriage entrance and the roadway was seeded. You can still get a sense of the carriage path if you look east and west through the meadow at any point midway between Oak and Fell streets. 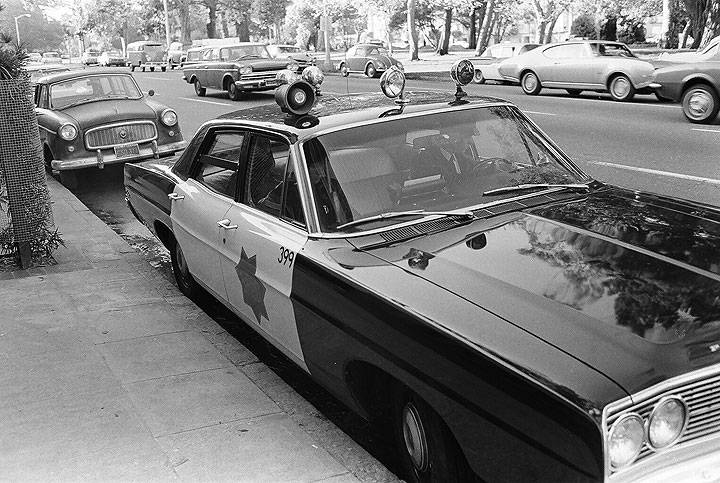 WALK EAST TOWARDS MASONIC--The soil of the Panhandle has always been more fertile than the soil to its west. For that reason in the 1870s the park engineers decided to use the Panhandle as a test lab for the trees and shrubs which would later be planted in other areas of the park. With manure swept from the city's streets and water drawn from underground springs, a forest was created out of the dunes. The breadth of the engineers' success is still visible. The trees of the Panhandle are the most venerable of the park. Many were planted in 1871 by the park's first superintendent, William Hall. There are about fifty different kinds of trees in the Panhandle. All but a lone California live oak near Fell and Central were brought here from Australia, New Zealand, Europe, South America and other parts of the U.S. Most prevalent are the Blue gum (Eucalyptus Globulus) from Australia, but you can also find numerous other varieties (including acacia, maple, red horsechestnut, cabbage tree, English hawthorn, Japanese cryptomeria, Monterey cypress, Laurel, southern Magnolia, Ngaio, Boldo tree, Monterey pine, Redwood, Elm, California bay, Australian willow-myrtle, Oregon ash, English holly, Black Walnut, Japanese yew, and European buckthorn, among others). 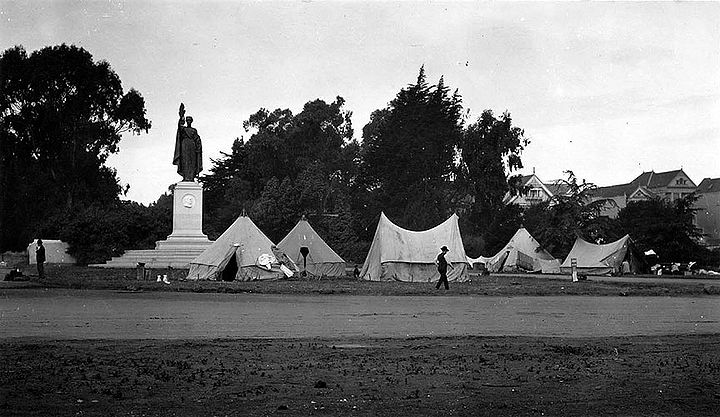 Refugee camp at foot of Panhandle days after the April 18, 1906 earthquake and fire.