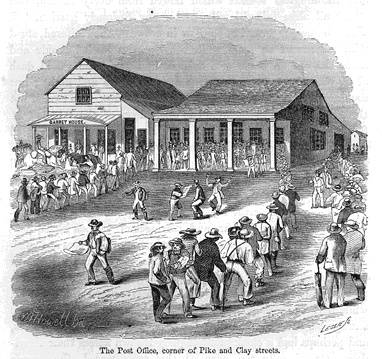 We cannot leave this part of our subject without alluding to the scenes that daily occurred at the post-office, which was situated at the corner of Pike and Clay streets. Everybody, of course, was anxiously expecting letters from home; and everybody hastened to look after them. The post-office was but a small building, and could neither accommodate many assistants and clerks inside, nor afford much standing-room to make inquiries without. When, therefore, soon after the arrival of the mail from the Atlantic States, which occurred but once a month, people came for their wished-for letters, exhibitions of interesting character were sure to transpire. To avoid riots and confusion, several regular lines were formed from the delivery windows, at the end of which applicants for letters took places as they arrived. So anxious were many to receive their epistles, that they posted themselves in the evening of one day to be early at the window on the morning of the next, standing all night in the mud, with a heavy rain pouring down upon their heads. The lines extended a great distance down Clay street to the plaza, and along Pike street, even across Sacramento street to the tents among the chaparral.

Hours therefore would elapse, before it came to one's turn to reach the window. To save such delay, sometimes people would employ and handsomely pay others to preserve places for them which they would occupy, in room of their assistants, when they were approaching the loop-holes where the delivery clerks stood, ten and twenty dollars were often paid for accommodation in this way. Indeed, many clever persons made large sums regularly by such work, by securing good places in the line early, never intending to seek letters for themselves, but only to sell their right of position to some richer man who was in haste, and regarded more his time than money. Some of these eager applicants had not heard from their far distant homes for many long months, and their anxious solicitude was even painful. It was therefore exceedingly distressing, to mark the despondency with which many would turn away upon hearing from the delivery clerks the oft-repeated and much-dreaded sentence, "There is nothing here for you."

On the other hand, it was equally pleasing to observe the cheerful and triumphant smile, not infrequently accompanied with a loud exclamation of joy, that would light up the countenance of the successful applicant, who hastens from the window, and as soon as he can force a passage through the crowd, tears open and commences to read the more than welcome letter, every word of which awakens in his mind some tender reminiscence. He is now communing with the dearest idols of his heart. He knows no feelings but those of kindness and affection. The lines upon which his eyes are riveted, were written perhaps by an absent wife, and they have made him already a better man than he was an hour before. She is describing the sadness of the solitude his absence has occasioned, and urging him with all a true woman's fondness, to hasten back to the home which needs but his presence to be one of unmingled happiness. She tells him of their innocent children--of their improving loveliness--and how she has taught them in their daily prayers to lisp their absent father's name. Look close into the reader's face, and the nature of his emotions will not be mistaken. There is an unusual twitching of the muscles of the mouth, a growing dimness of the eyes, and tears are rapidly tracing down the furrows of his sunburnt cheeks. He is too much absorbed in his interesting occupation to know or care that he is an object of curious observation. What matters it to him what others think of his apparent weakness? It is a weakness of which he need not be ashamed. He at length carefully folds the paper and carries it to his comfortless abode, where he reads it over and over again, until by constant handling, and the tears that fall upon it, its characters become illegible. That night does not find him in the gambling-house nor elsewhere in search of amusement but in his own wretched chamber, he is silently communing in spirit with the loved ones at home. Such scenes were of hourly occurrence, and tended to exhibit the better portion of human nature, which neither the thirst for gold nor feverish excitement of the place could entirely destroy.