by Mark Evanoff, originally published in It's About Times, the Abalone Alliance newspaper, June-July 1981

Its name and its trappings imply a grassroots organization earnestly dedicated to its cause. It has local chapters, a monthly newsletter, and treats its members to social affairs like “energy luaus.” But an only slightly closer inspection makes Citizens for Adequate Energy (CAE) look a lot like a public relations front for the Pacific Gas and Electric Company.

PG&E's public relations officer Dick Davin told It's About Times that PG&E was an “early sponsor and supporter” of CAE, and continues to be “pleased with its educational program to keep people informed of their energy options.” But Davin did not agree with our suggestion that the group is doing public relations work for the utility, although CAE's energy ideas are virtually indistinguishable from PG&E's. Davin explains that the distinction is that CAE “isn't selling PG&E.” 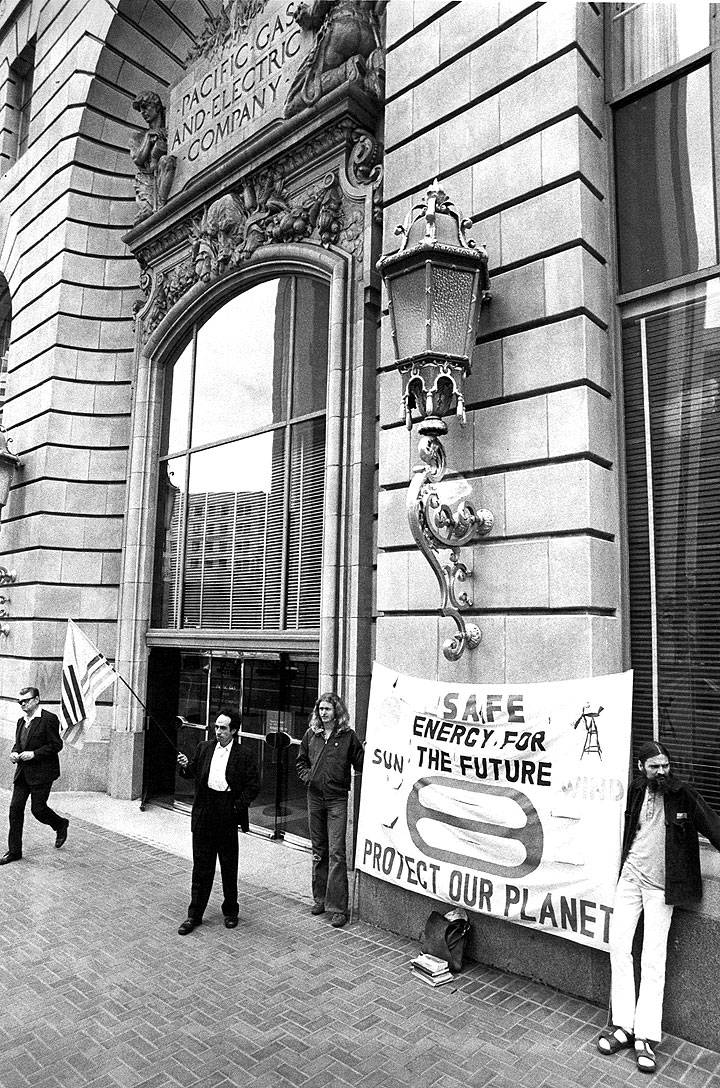 This demonstration by SAFE outside of PG&E on Market Street in San Francisco is the kind of common occurrence in the late 1970s and early 1980s that led the corporation to seed "astroturf" organizations of its own, as described in this article. 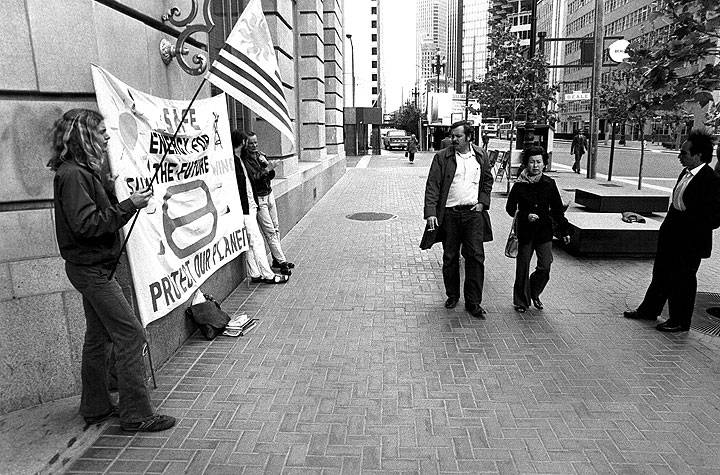 Photos: It's About Times newspaper

As for those PG&E employees who work for CAE, Davin said they do “everything from liaison work to research.” For example, he explained, in-kind contributions to CAE have paid for PG&E employees to drive people to CAE meetings, attend those meetings themselves, speak at CAE events like the pronuclear “coffee klatsches” on Nuclear Education Day in 1979, prepare to give the speeches, put together publicity materials for CAE, research topics like cogeneration for CAE, and have their secretaries type up CAE materials.

Davin said he had no idea how many PG&E employees were members of CAE, but confirmed that PG&E vice president Richard Clark serves on the group's steering committee. A Bechtel vice president, Robert Allen, is also on that committee.

The extent of PG&E's corporate generosity was discovered in Public Utlities Commission financial records by Dwight Cocke of Californians for Nuclear Safeguards. CAE executive director Marisa Samuels, apparently trying to minimize the donations, told IAT that the contributions were made over the years 1979, 1980, and 1981. Davin of PG&E said the donations covered 1979 and 1980. But PUC staff confirm that the $388,000 figure is for 1980 contributions only.

According to Samuels, 4000 individuals and 100 companies “with an interest in California's economy” belong to CAE. She wouldn't say which of these companies have given money to the group. But old CAE leaflets prominently displayed the names of the corporate contributors, including six stock brokerage firms, California's two largest banks, two oil companies and numerous nuclear construction companies.

Since it was founded a year and a half ago, CAE has organized local chapters throughout the state which give public presentations on the benefits of nuclear power and the necessity of licensing the Diablo Canyon nuclear plant. CAE claims to represent the majority that believes Diablo is the only way to assure a reliable supply of electricity. It pledges to help “get things moving again.”

CAW also attacks critics of Diablo, though not by name. “Those who would block all energy projects seem to work around the clock,” one of their leaflets reads. “They're flamboyant. Their claims are scary. They make the news. And... they have just about succeeded in bringing the regulatory and decision making process to a grinding halt.”

Students for Adequate Energy, an unofficial CAE affiliate in San Luis Obispo, habitually shows up at anti-Diablo events. During the low-power testing hearings in May, members of the group placed themselves between the entrance to the hearings and the protesters. While the crowd was listening to Sandy Silver of the Mothers for Peace speak to the Atomic Safety and Licensing Board, the president of Students for Adequate Energy clambered onto an imitation barrel that was supposed to represent the oil Diablo would save. He started giving his worn pro-Diablo harangue, but was pushed to the ground.

CAE chapters throughout the PG&E service area placed “Enough is Enough” ads in their local newspapers last January. Their efforts to get local governments to pass pro-Diablo resolutions have not been overwhelmingly successful; so far only the El Dorado County chapter has been able to persuade its board of supervisors to go along with it. An unidentified CAE staff person said the resolution campaign has been an “ad hoc effort” that may “get better organized” soon.

Although none of the three CAE chapter chairpersons interviewed by IAT could clearly explain the organization's structure or decision-making process, its goals remain clear: “We must streamline needlessly time-consuming licensing and permitting processes. We must get rid of inconsistent, unclear and conflicting local, state, and federal energy environmental policies.”