Outlaw Bikers Hang at The Wall 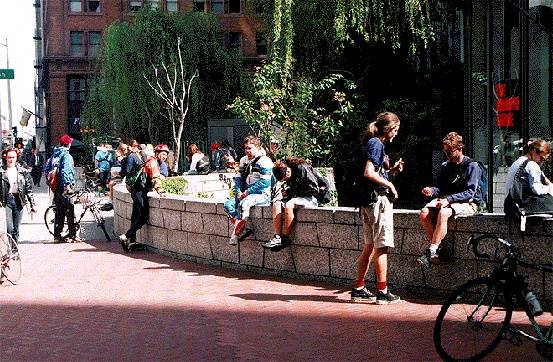 Bike Messengers at the Wall, 1998 (Sansome and Sutter)

The Bay Area has long been known as the outlaw biker capital of the world, thanks to Sonny Barger's Hell's Angels. But for over twenty years, another kind of outlaw biker has been terrorizing motorists in the Financial District. These outlaws ride bicycles instead of Harleys, drink coffee instead of booze, and, instead of spending their spare time raping and pillaging, they play hackeysack. Yes, I'm talking about the dreaded bike messengers, those suicidal delivery-boys and -girls who race through downtown San Francisco like bats out of bicycle hell, running red lights, careening through crowds, sprinting the wrong way up one-way streets, and generally making a colorful nuisance of themselves.

The headquarters of San Francisco's bike messenger subculture is The Wall, a three-foot-high brick embankment at Sansome and Sutter. Bikers have been hanging out there since at least the 1970's, drinking strong coffee, smoking the occasional joint, and generally goofing off between runs. The spot is a small enclave of humanity amid the looming concrete walls of the Financial District. Why is it called The Wall? Though occasionally an exceptionally intellectual bike messenger will claim that it was named after the famous Sartre short story, most agree that it got its moniker from Pink Floyd's movie and accompanying song, whose lyrics include memorable lines like "we don't need no education, we don't need no thought control . . . all in all you're just another brick in the wall."

Bike messengers definitely don't want to be "just another brick in the wall." That's why they risk life and limb for $60-$80 a day--so they can avoid the slow, dull death of office work, and spend their days outdoors, dressed as they like, without a boss peering over their shoulders and breathing foully down their necks.

"It's a menial job with an attitude. While still being lackeys for the suits, a.k.a. The Man, bike messengers have created a complex social world to provide the illusion of freedom and individuality. The job itself is secondary. The focus is on the mode--the ride. Messenger art reflects the fantasy of the cyborg rider--one with his bike, overriding the physical constraints set by urban planners in concrete. We own the road, we know the city and her buildings, her shortcuts, the lay of the land. We have the cockiness of those who have claimed urban ground. That's why William Gibson made his most recent novel's main character a bike messenger/squatter. He knows that there are the suits who buy and sell the land and the outsiders who really own it and who aren't afraid to use it.

"Most of what we deliver now are legal documents, blueprints and graphic arts/photographs. The electronic mode of sending documents is, as yet, unable to transmit these while retaining quality; so we strap them on our bikes. And, as Gibson noted, in cyberspace, information can be every-where or nowhere at any time. With a messenger, you know where the document is--probably at "the Wall" in a cloud of pot smoke."

--Lucy, as reported to Fred Gardner in The Anderson Valley Advertiser