Origins Of Silicon Valley: The Development of the Electronics Industry in the San Francisco Bay Area

Originally written as a Masters Thesis, this introduction leads to a sequence of pages adapted from the full thesis. 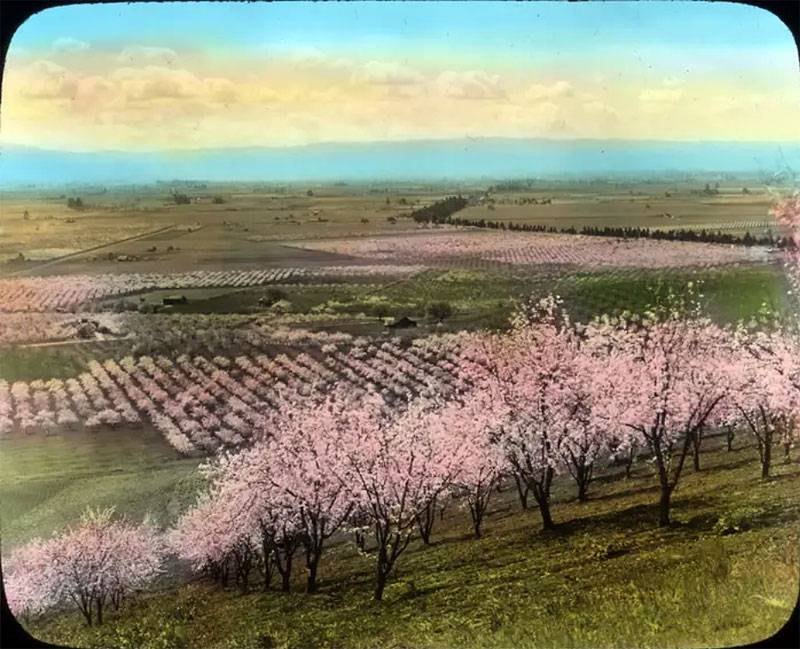 The Valley of Heart's Delight, what Silicon Valley was once known as, long before industrialization and suburbanization altered it forever.

If asked to name the most important respect in which California differs from the other forty-seven states, I would say that the difference consists in the fact that California has not grown or evolved so much as it has been hurled forward, rocket-fashion, by a series of chain reaction explosions. ...in California the lights went on all at once, in a blaze, and they have never been dimmed.
—Carey McWilliams, 1949

During the 1960s and 1970s Silicon Valley seemed to emerge suddenly as the preeminent center of electronics manufacturing in the United States. The Santa Clara Valley, located around the southern portion of San Francisco Bay in Northern California, was transformed within two decades from a rural and small town economy based on agriculture and food processing, to a burgeoning urban economy based on new sectors of the electronics industry.

The population of Santa Clara County doubled from 1960 to 1980. San Jose was the fastest growing city in the United States between 1970 and 1980, when it jumped from being the 29th largest to the 18th largest city in the nation (Rodgers and Larson, 1984). By 1980 Silicon Valley employed more electronics workers than the entire state of Massachusetts, which contained the previously dominant electronics cluster, the Route 128 corridor located on the outskirts of Boston. Silicon Valley's growth was part of a larger wave of expansion in electronics in the state of California, but the most striking geographic feature of the industry in Northern California was its spatial density. In 1980 Santa Clara County had 71% of its manufacturing employment in electronics, a figure much higher than other centers of electronics production that emerged in the western United States after World War II.(1)

This heady growth created more than a dense concentration of electronics companies; it created a powerful mystique that captured the imaginations of planners and would-be entrepreneurs worldwide. The rise of Silicon Valley seemed to offer the possibility that a region with no prior industrial history could grow directly from an agricultural economy to a leading edge industrial economy, given the right set of circumstances, producing huge personal fortunes for scientist/ entrepreneurs and a spate new products with world-altering capabilities. The idea that so much growth could occur in such a short time within such a small area made it conceivable that a local planning body or development agency could influence the course of large scale trends in regional development.

The amount of attention paid to Silicon Valley has much to do with the rapid growth of the electronics industry as it does with the decline of industries that had been major post-war employment generators in the United States such as the automobile, steel, and tire industries. In 1989, electronics was the largest manufacturing industry in the United States, employing more than 2.6 million people, three times the size of the automobile industry and nine times the size of the steel fabrication industry (Electronics Industries Association, 1990). For policy makers at the state and local level, the question of how to channel some of the growth in electronics, or other "sunrise" industrial sectors perceived as having high growth potential, into their jurisdictions became a question of paramount importance during the late 1970s and early 1980s, as the decline of heartland industries became ever more acute.

Thus, the experience of Silicon Valley became the Holy Grail of economic development: a model to be emulated, an example to be followed, and a goal to be achieved. Academics concerned with economic development, technological change, industrialization, urbanization, and regional development, also became enamored with the story of Silicon Valley. Here was a laboratory for analyzing how industries and regions grow. If not a success story to be emulated, then an opportunity to lay bare the mechanisms of capitalism at its most dynamic.

Unfortunately, the full story of how Silicon Valley came into being has not been told. Most accounts of the region’s history begin in 1955, when William Shockley, who had co-invented the transistor at Bell Laboratories in 1947, founded Shockley Transistor Corporation in Palo Alto (Braun and MacDonald, 1982; Scott and Angel, 1986; Scott and Storper, 1987; Morgan and Sayer, 1988; Storper and Walker, 1989). In 1957 eight engineers, led by Robert Noyce left Shockley Transistor to form Fairchild Semiconductor. Robert Noyce was to invent the integrated circuit at Fairchild in 1958, a device that has spawned the "microelectronics revolution" by allowing the development of a host of new products and the transformation of many existing ones. Fairchild, it is often said, was Silicon Valley’s first “spin-off”; its formation was closely followed by managers and engineers in turn leaving Fairchild to start firms of their own. The Fairchild spin-off companies were to become the largest and most important semiconductor companies in the world; their ranks include National Semiconductor, Intel, and Advanced Micro Devices (for detail on the genealogy of semiconductor firms in Silicon Valley, see Rodgers and Larson, 1984).

Other accounts push the origin of Silicon Valley back a bit further, to the formation of Hewlett-Packard Company in 1938, and Varian, in 1948 within the cozy incubator of Stanford University (Hanson, 1982; Rodgers and Larson, 1984; Saxenian, 1983, 1986, 1988a). These companies are large, and are the some of the oldest Silicon Valley companies still operating in the region. Therefore they are often mistakenly identified as the first. The agglomeration of electronics companies around Stanford University is attributed, in this version, to the vision of Frederick Terman, the dean of Stanford University’s Engineering school during World War II, and the influx of military financed R&D that he brought to the area (Saxenian, 1985, 1989).

This thesis shows that these accounts truncate Silicon Valley's history and therefore divorce the region from the economic geography of the San Francisco Bay Area, within which it is situated.(2) Hewlett-Packard and Varian were not the first important electronics companies to form in the region, and Fairchild was not the first "spin-off" company in the area.

Frederick Terman was as much a product of local ferment in electronics as he was its catalyst. This thesis shows that Silicon Valley arose from the earliest shards of industrialization in California, and furthermore, that the electronics industry’s phenomenal growth in Santa Clara county has been based on a social organization of production that has been taking shape locally since the 1870s. The historical record clearly shows an unwavering antecedent pattern of industrialization in the fields of electric power (generation and transmission), electronic components, radio electronics, military electronics, and electronic instruments in the San Francisco Bay Area prior to World War II. This pattern closely matches the structure of industrial organization so widely hailed in Silicon Valley, if at a much smaller scale. Thus, the roots of Silicon Valley's development are well over one hundred years old. While this revelation does not make the emergence of Silicon Valley any less spectacular, it does change the basic premise of a widely held model for economic development, inviting reconsideration of both policy and theory.

This thesis traces the early histories of the electric power and electronics industries in the San Francisco Bay Area. There are many facts about the early electronics industry in the San Francisco Bay Area that have escaped wide attention. The first ship-to-shore radio signal sent in the United States originated from a lightship off the coast of San Francisco in 1899. The first radio station in the United States featuring regularly scheduled programming was established in San Jose in 1909. The first effective worldwide radio communications system was developed, manufactured, and installed by a Palo Alto company for the U.S. Navy during World War I. Lee de Forest discovered the amplifying and oscillating properties of the vacuum tube in the research laboratory of this company in 1912, marking the beginning of the "electronics revolution." The first public address system and modern moving coil loudspeaker technology was developed and manufactured by an Oakland company in 1917. The best early mobile short wave radios were developed and manufactured by a South San Francisco firm during the late 1920s. Electronic television was developed in San Francisco in 1926. The first production-ready single-dial radio tuner, a device that greatly expanded the market for home radio sets, was developed by a Palo Alto engineer in 1927. The following year a different Palo Alto engineer invented and began to commercialize the first metal detector. A Redwood City engineering laboratory became the leading producer of precision glass-forming machinery in the United States during the 1930s and 1940s . The large, high-power vacuum tubes built by this company during the 1930s and 1940s, highly sought after by the U.S. military, were available from no other source. The largest merchant producer of vacuum tubes in the world during the 1940s and 1950s, based on indigenously developed technology, was located in San Carlos. The first (United States) audio and video tape recorders were developed by a company established in San Carlos in 1944. A company in San Carlos developed and manufactured most of the airborne radar antennas used during World War II.

The stories to be told here are not exhaustive. But they encompass some of the most important personalities, companies, and technologies that made up the innovative milieux that was to later blossom into the most important cluster of innovative electronics companies in the world. There are more stories to be told, and this thesis, at best, creates only a partial picture of the rich prehistory of Silicon Valley.