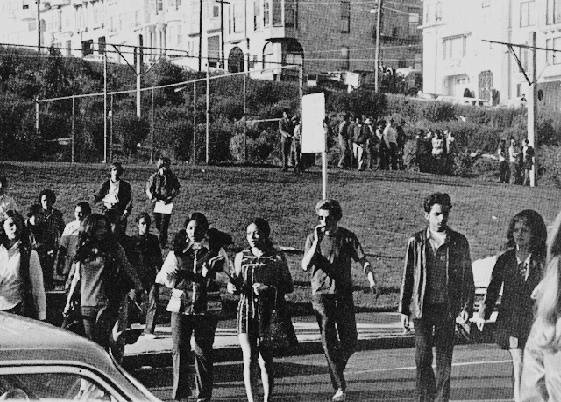 A loosely organized collective of Mission High students, Latino residents and revolutionaries has drawn up seventeen demands and will present them as a gift to strife-shaken principal Harry Krytzer. The gift will be wrapped in a student strike, starting on Monday, February 3.

The police say they'll arrest anyone picketing or leafleting around the school. The Latinos and the Black Student Union (BSU) have decided to concentrate their actions a block away, meeting the kids getting off buses from the Fillmore, intercepting Latino teenagers coming up Dolores.

Two weeks ago, several fights erupted between Latinos and blacks. Educational facilities are poor, or non-existent. Ten counselors for two thousand students. Police were called in. Members of the BSU shouted "Pigs off campus!" Latinos joined in the chanting. Some white students too. A few rocks found their way into policemen's mad memories.

High school administrators, called in some of the better-known community organizers who operate out of the Chicano center on Twenty-third Street, the EOP office on Valencia, and the Horizons Unlimited Project on Alabama.:

Monday, a week ago, 11th grader Francisco Flores was charged with blame for the ruckus and suspended. Community organizers Al Martinet and Jim Queen were ordered to leave the school grounds. This time the police showed up in force, with riot helmets. Some cops were surrounded by jeering students singing " jive oink-oink."

Tuesday, the Administration had three meetings. White, Black, and Brown. (More than half the students are Latinos.) When shown the demands, Krytzer laughed like a corrupt bishop: "These are dreams!" A fiasco. The students were not satisfied. Martinet, Flores, Jim Queen and Johnny Gonzales were arrested for "trying to agitate the students.

Wednesday police cleared the halls, forcing kids into class or out of the building....

Thursday was a half-day. No school on Friday.

Latinos and blacks set the stage for the strike. "The white students," one particularly overt chicano-cultural partisan tried to tease me, "are too stoned all the time to do anything."

Here are some of the demands for you, to savor:

-Black and Latino programs of study.

-Removal of hall monitors, to be replaced by teachers' aides chosen by students.

The SF Express Times/SF Good Tunes had a brief but intense lifespan of about two years. (The Express Times changed to Good times in April 1969.) The "Underground Newspapers" microfilm collection at the main library has most of the issues. This article (condensed) was from the February 4, 1969 issue of SF Express Times. (Edited by Larry Kissinger and reprinted in SF Frontlines, December 1998.)