New Stages: Dance and the Transition of Form 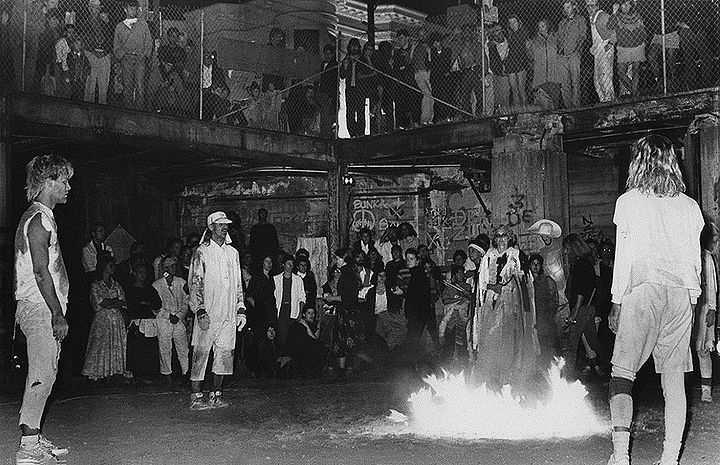 The viewer perceives a stage: a place on which, through which, we watch. Stages define what content we watch. And form takes its shape and meaning, a logic like language, through staging. The stage the audience lens, each viewer a lens, each magnifying the other. Content becomes a real, realized thing, a performance thing, in place, in time. And the emotive performance, the sensory experience, lies exposed. Meaning takes root and form in these places, on various stages.

By the end of 2010--dance long since overflowing past theaters, past warehouses and occasional “site-specific” events into galleries, circuses, bars, homes, drag shows, punk shows, storefronts, advertisements, music shows, trolley cars, popular & unpopular movies, city monuments, catwalks, sidewalks, parking lots--the incorporation of dance in our world appears more and more, and in increasingly non-traditional places. Dance mixes together various disciplines, including circus arts, performance art, street art, folk art, and drag; but is more and more commonly instigated internally by artists who identify within several different performance practices. Ritual and community often play a strong part in the process. There remains a flexible fluidity of roles: performers at a venue one week are the audience the next week, are producing someone else’s work another week, are creating their own work and/or venue as we speak.

The desire for artistic selfhood is not new to California, or the San Francisco-Bay Area. It has driven performance on the West Coast since the days of Isadora Duncan. With no overriding lineage or school within which to excel or rebel, except eccentricity, there remains a vulnerable freedom amidst a chaos of performers, dancers, choreographers, directors, and the venues within which they work.

The abundance of vulnerable freedoms and lack of formal establishment result in varied and prolific sorts of performance work, and importantly, performance outlets rising up out of artist communities. Yet performance and its ephemerality, its amnesia, its documentation in soft memory, continues to evade concrete representation. The question remains: when we do document, have we accounted accurately? 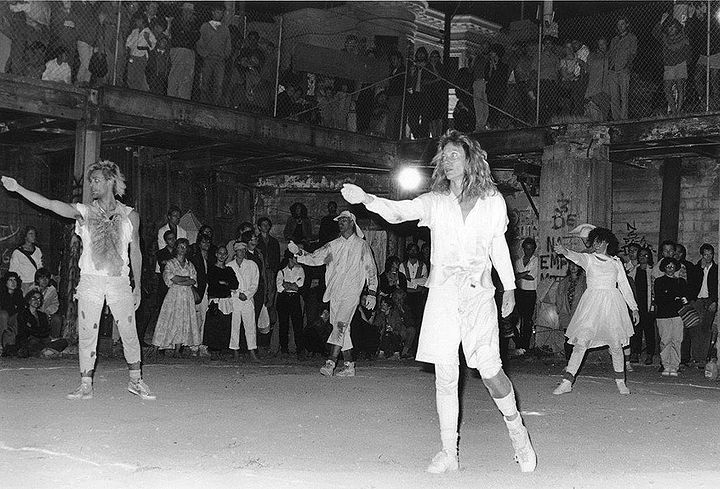 Religare, a piece of live performance put up in the late '80s by the dance company/performance ensemble, Contraband, was set outside, off the street. First performed inside the decimated Gartland Pit on 16th and Valencia St in San Francisco, it was at the time a site of unresolved arson, a pit left in the wake of a 1975 fire, which had resulted in the death of 12 people (officially). Unofficially 14 people were accounted for. The performance, developed specifically for the site, was later reprised at other locations. At once a paean, a ritual, a protest, a dance performance, a live installation, among many other things; the heart of such a performance laid bare the impacts of the fire and its aftermath, its grief and injustice, and the community that felt the impact. 10 years after the fire, with the appearance of a dance show at the site, members of the audience would join in with the performers; making music, painting a mural, even helping to prepare the site for performance and later to pick up trash. The show’s wild spiritual balm came to inspire community at a site of trauma in the city. Largely undocumented but in memory, it remains a legend. Religare thus built upon and set the stage for a grassroots, expressionistic, anti-authoritarian tradition of performance-making in the Bay Area.

As a mark of the wildness inherent to performance-making in San Francisco, the work of such companies as Contraband, among many others, displayed a flexibility in their staging, in addition to their interlacing of mediums. The members performed outside, or alongside, as well as within, the proscenium theater: an alchemy of dance, text, song, sculpture, lighting, and pyrotechnics. In this situation, necessitating a pliant lens, the audience relinquishes a single, central focus. This flexible lens, a requirement in the mixing of media, contains the emotive presence of the audience, displays the individual in the audience. The audience an active eye, each vantage point its own central focus. No one, single vantage point represents another. No assumption of center, no proscenium theater requiring more ticket money in order to see from the intended vantage point. The multi-lens scope incorporated into the art, artists and audiences decide for themselves, and so define their own aesthetic values through the doing and seeing. Such a lens assumes that an important change in modern art may not be the craft so much as the spectator-performer relationship.

"A chair moves, the mannequin drops. Dancers shift, and then, pause... turn. Turn again, go somewhere else. A thing happens, affects another, and the dancers, the architecture, shift. Architecture and dancers trace secret patterns, guided by innate currents. There is an internal logic. In this felt logic there is no precise formula. You feel it in your organs, in your guts & blood & nerves. Through seemingly random chaos, the audience searching for meaning, a picture of being laid bare amidst the static beginsto take shape. Images pile up, quietly dissolve, and the memory of those images is laid bare, washed open and exposed." (On the choreography Zeropoint, 2010, by Sara Shelton Mann)

How does one understand what they are watching, which frame or lens to see through? What is the artist’s responsibility in making their frequency clear? Does the striving for artistic independence develop self-determination, or do "identity,” “identity politics,” or “eccentricity” become just more catchphrases, more grant-writing key terms, a homogenizing of archetype?

In creating the context for our forms we self-define in the art form itself, we define the art form, itself. DIY and internal community support are the backbone of dance and performance, both to make the work come into fruition, as well as to give the work the context in which it will attain its reason, its resonance. Self-determination runs the motor to this art form, the desire to give voice, to enervate. There is the desire to transform, and instead of one sublime transformation, we become transform-able, malleable. Maybe transformability was the 20th century artist’s search, after all. We perceive transition, as we transition, so does our lens. This development of spectator-performer relationship digs deep into what we mean by performance.

There are many different stages.