Hoodline is an online news publication that covers the issues, people, community organizations and local businesses that make up San Francisco neighborhoods. The following article is by Zann Cannon Goff and was first published on February 10, 2015. 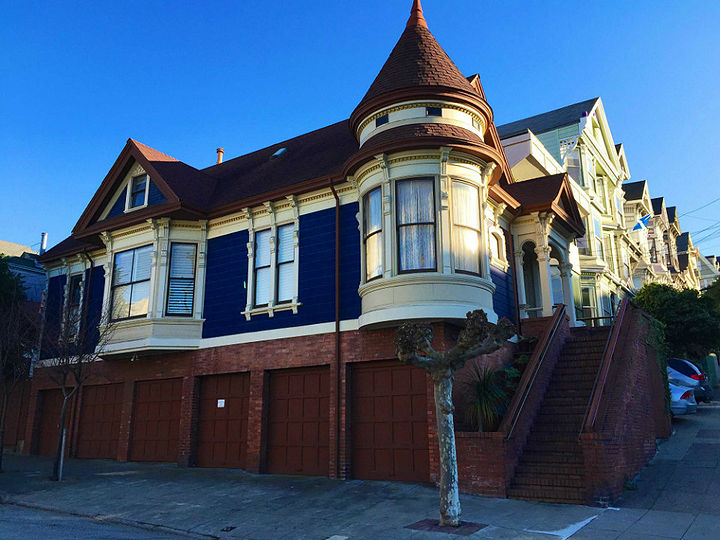 In your journeys around the neighborhood, have you ever noticed the ornate blue turreted Queen Anne at 701 Castro, on the southeast corner of 20th Street?

It draws the attention of many passers-by, and is photographed frequently. Besides the well-maintained architectural details, what stands out is the unusually large number of garages for a single-family Victorian: six line the length of the house along 20th, and a seventh (now covered by a trellis) faces Castro from the front.

What's the story behind the unique house? We were intrigued to find out more ourselves.

A man named Fernando Nelson (1860-1953) built the home in 1897. Nelson was a prolific builder in San Francisco, moving here from New York at the age of 16 and building his first house in Noe Valley that same year. According to the Sunset Beacon, Nelson built hundreds of houses around the Castro, Noe Valley, and Mission neighborhoods, and ultimately became most known for purchasing the land at the west end of the Twin Peaks Tunnel to establish the West Portal neighborhood, and developing the Richmond.

As new streetcar lines popped up in the western half of the City, Nelson would buy and develop the empty lots along the routes, and this strategy kept him in business for seven decades. Here in the Castro he started off simply, offering two floor plans that he carried on an index card in his pocket, the result of which can be seen in the rows of matched triangular-pitched houses all along Hartford and Noe streets.

Over time, his styles transitioned with the architecture of Victorians, Edwardians, and through to the Craftsman period, and an estimated 75 percent of his more-than 4,000 homes still exist today. According to the Examiner, Nelson constructed more than half of the homes in the Duboce Park area alone. 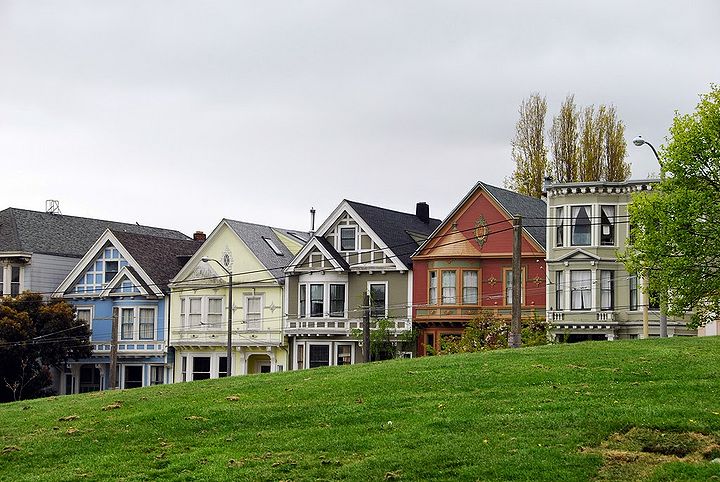 Rather than do what developers do today (building housing and advertising it), Nelson instead built himself a home in a neighborhood as an advertisement of sorts, offered his services, and then customized his floor plans to his customers' specifications. The blue Queen Anne on the corner was his own home while he developed the Castro, and served to showcase the fine quality and details he offered.

Nelson's house was originally at the back of the lot, with his shop located at the front corner and his lumberyard in the neighboring lots.That brings us back to the garages. 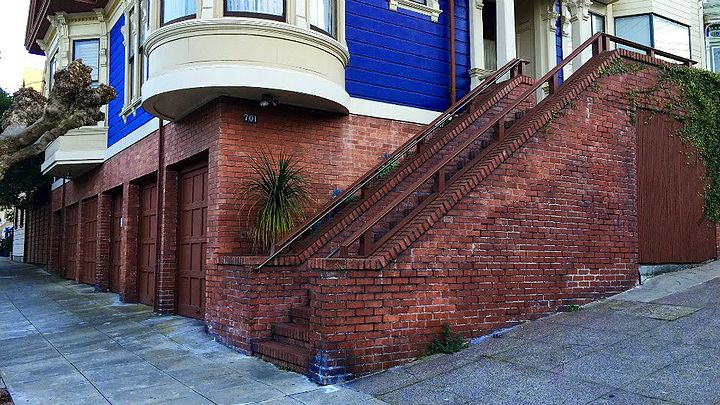 Besides his passion for development, Nelson was also one of California's early automobile enthusiasts, and even served as the first president of the San Francisco Motor Club. By 1900, he had begun to amass a collection of cars, and soon he had the house moved atop new brick garages, thus completing its construction as it looks today.

Nelson loved the challenges associated with driving distances, and is believed to be the first to drive into Yosemite Valley, in 1903. Perhaps more notable is that he set the record for the first one-day drive from San Francisco to Los Angeles in November, 1906: a mere 18 hours and 13 minutes. It took him another two years to break his own record, with a steam-powered car in just over 17 hours.

Those seven garages housed an integral part of California’s early record-setters. Today, only three of the garages remain usable for their intended purpose, with the others' doors sealed off but still accessible from the inside for other uses.

Nelson died in 1953 at the age of 93, leaving behind a uniquely San Franciscan architectural legacy that is still seen and appreciated by the public today.

Update: The owner of the house has come forward with a treasure trove of historical information. We're sharing their correspondence with us, below:

The house originally had no garage and it was located at 709 Castro, now 707 Castro. Wooden stairs went perpendicularly to the porch, just as the rest of the houses in the block. The corner lot was originally a garden complete with spring fed fountain. Much correspondence about the source of the water still exists in the Water Department records.

There was a full basement where Nelson used his horse, Bill, to power a saw used for cutting lumber. Sort of an early-day power tool. In his thrift, Nelson would bring broken barrels of nails home and set his children to sorting them.

The building at 4183 20th Street crossed both properties, 701 and 709. It was originally a bakery and there was a stall in the last eight feet or so for Bill. This building was not built to last, but we have kept most of it. Nelson did have two cars here. My supposition is that they were parked on the street or in the back yard. There was a large barn door gate in the fence to allow animals and vehicles in. This yard was at the current grade, whereas the garden was four or five feet higher.

One of the more interesting things I uncovered in my research was a set of 1916 probate records about efforts to sell the house. At this time you will recall the house was still one lot up Castro. The records state that the house was unsaleable. It was hopelessly outdated with no electricity! There was a bathroom tub and sink off the kitchen. But the privy was in the yard! The house was considered a liability to the estate. Of course it did eventually sell to the family from whom we bought it. They had moved the house, never bothering to change the house numbers. In old records you will find the house listed as 709 Castro, even though it sat on lot 701. This caused us no end of trouble when we bought.

The movers did everything wrong. They did not attach the moved structure to the new inadequate foundation. They even used the old crumbling retaining wall that separated the yard from the garden as the rear foundation. They never put anything with shear strength behind the new "modern" brick base. We closed garage doors just to install shear walls. It is truly a miracle the house still stands. As a matter of fact the competing bidders when we bought the house in 1971 intended to tear it down and use the double lot to build a seven unit apartment building.

For more on Nelson and his legacy, particularly in the Richmond District, check out this informative article at Outsidelands.org – as well as this podcast they came out with about him just last week!