Difference between revisions of "Neiman Marcus/City of Paris" 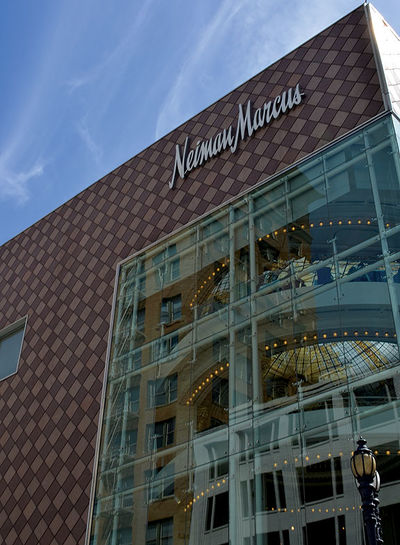 Neiman Marcus at Geary and Stockton.

This harlequin motif wall at the corner of Geary and Stockton Streets is the exterior of the Neiman Marcus building, a structure that bears little resemblance to the great beaux arts edifice that once inhabited this space and was home to the City of Paris, San Francisco’s classiest department store.

The origins of the City of Paris go back to 1850, when a French silk-stocking manufacturer, Felix Verdier, showed up in San Francisco Bay with a ship loaded with silks, laces, fine wines, champagne, and cognac. The ship was surrounded by residents in rowboats flush from the gold fields, who bought the contents of the ship before it had a chance to dock. Verdier realized he was on to something and returned a year later with another shipload, staying on to establish the City of Paris Dry Goods Company.

In the 1906 earthquake and fire, the interior of the building that housed the City of Paris was destroyed while the exterior remained intact. This gave renowned San Francisco architect Arthur Brown Jr. a chance to redo the interior with features that included an opulent rotunda with a stained-glass dome.

For more than a century the City of Paris was a special place. Here you could buy kid’s books in French and purchase and exchange rare stamps. There was a booth with a woman who cut out and sold black silhouettes. Each holiday season, the rotunda housed the official San Francisco Christmas tree. The Verdier family still owned the store in the 1970s, by which time their charming and elegant way of doing business was no longer in style.

Enter, in 1974, the corporate presence of Neiman Marcus with a interest in buying the building. But the new Texas owners found the space unsuited for modern merchandising and said it had to come down. They hired San Francisco architect John Carl Warneke, whose design was so unfortunate in the eyes of his 24-year-old daughter that she pleaded with city officials to stop her father from building it. The project stalled, and it wasn’t until 1979 that famous architect Phillip Johnson was given the green light to go ahead with the existing building after he came up with a plan to preserve the City of Paris rotunda and dome. 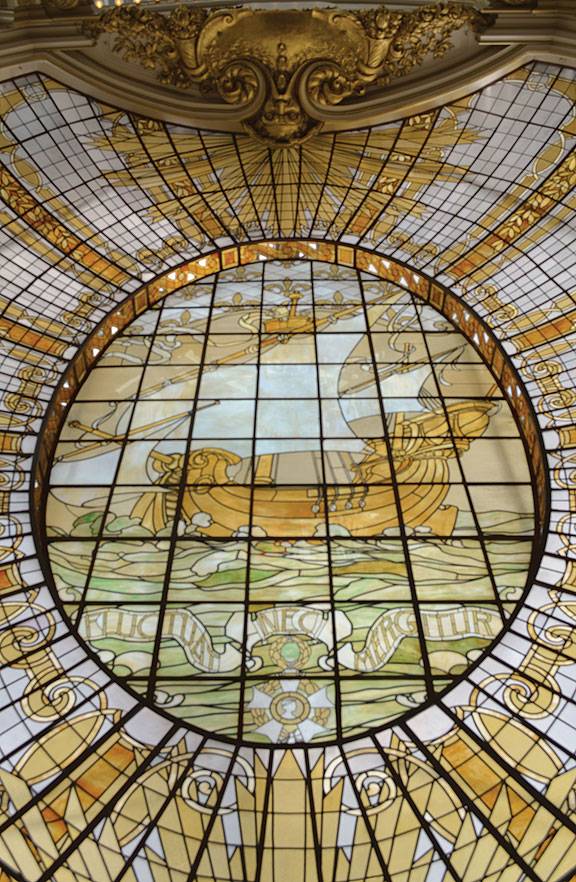 Still, many citizens were unhappy to lose the City of Paris building. Some 55,000 signatures opposing the destruction of the revered building were collected; 20 organizations rallied in support. The City of Paris was listed in the National Register of Historic Places, but in 1981 the structure came down. Johnson explained how he hoped the public would come to appreciate the new building. He told the San Francisco Examiner' that the wall pattern “comes from a Renaissance palace I saw in Perugia.” On another occasion he said, the building’s facade should be viewed as an abstract painting, “like a Mondrian.”

At least one planning commissioner didn’t see it that way. The building was about as exciting, he said, as “the PG&E substation at Larkin and Eddy.”

The controversy over the City of Paris building had its upside. Charles Hall Page, founder of San Francisco Heritage said that until the City of Paris uproar, “[Preservationists] focused on Victorian houses. People thought they were neat and cute and should be protected. People were unaware that we had some fine commercial buildings downtown.” Now that’s changed. Historical downtown buildings have organizations and advocates on their side, who stand ready to—when necessary—fend off the wrecking ball.

Excerpted with permission from Art Peterson's book, "Why Is That Bridge Orange?" published in 2013, by Inquiring Minds Productions.
Retrieved from "http://foundsf.org/index.php?title=Neiman_Marcus/City_of_Paris&oldid=33647"
Share this page: