Difference between revisions of "Negative Trend Erupts at Mabuhay Gardens" 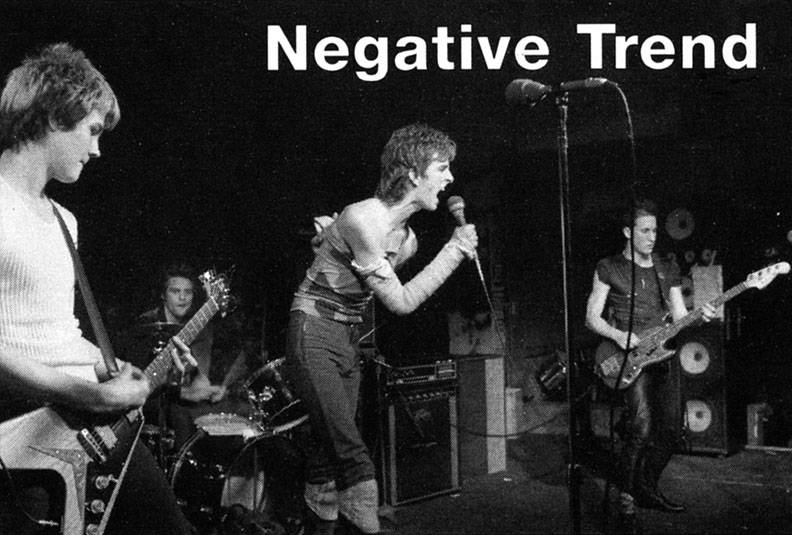 Grand Mal played San Francisco's clubs during 1977, and the band was getting tired of singer Don Vinyl's wimp tendencies, wanting to be 'The Hard-Edged Band.’ Enter Rozz, a singer from Portland who made his S.F. debut at a showcase party, performing in front of Grand Mal and breaking his arm in the process. His trashed limb would be a metaphor of things to come. Rozz secretly rehearsed with Grand Mal until the night Negative Trend twitched to life, during November 1977. In one of rock and roll's more unusual coups, Grand Mal had played several songs while opening a Dead Boys show; at the agreed moment, Rozz jumped out of the audience and dispatched Don Vinyl with a knuckle sandwich and a bum's rush. They proceeded to play their own set, surely confusing any Grand Mal fans in the audience.

Negative Trend's hardcore lullabies included 'Deadage Teens,' 'Anger Is Action,' 'People Are Sick,' 'Confusion,' 'Target For Disgust,' 'Intensive Care,’ 'Crimes of Passion,' 'Tragedy,’ 'Human Failure,’ 'Death In A Cab,' and 'N.W.L.F.,’ a ditty about New World Liberation Front terrorists who were fond of explosives (more about this later). Early sets ended with 'Bleed To Death’ and no cover songs were pandered. Negative Trend's uncompromising presence had an impact at Mabuhay Gardens, thanks to a tight musical assault and Rozz's antics which incurred multiple contusions, abrasions, fractures and sprains. Playing shows with the Dils, Avengers, Nuns, UXA and Mutants, the band performed for musical refugees of the day, and impulsive thrill-seekers who came by in search of new musical kicks.

Negative Trend's fleeting moment of infamy came during the Sex Pistols' final show, at San Francisco's Winterland Arena during January 1978. The day before, they had spray-painted graffiti on the outside of the hall, even crafting a fifteen foot "-T" logo made with flyers; you bet this was seen as a charming gesture by promoter Bill Graham. Pistols' manager Malcolm McLaren had not shown for any of his band's U.S. dates, but he realized the importance of being present for this final tour stop. Bringing his knack for creative troublemaking into play, it's been reported that McLaren wanted 'someone to blow the Sex Pistols off the stage,’ or 'the worst band in San Francisco' to disrupt the show. Falling between those two extremes, Negative Trend were put in touch with McLaren, who brought them to the hall that evening.

Backstage, McLaren confronted Bill Graham and told him,"This band wants to go on, they're here, they're more important than the Pistols 'cos they're from this town, they should be taking over this shitty old joint." Graham countered this demand for an additional opening act by proposing Negative Trend could play after the Pistols' set; McLaren accepted the offer. The Nuns and Avengers primed the audience for the impending spectacle. As the evening wound its course, here's what really happened: While the Sex Pistols played, a group of men jumped Negative Trend and beat them up, quickly tossing them out a side door. Backstage, their equipment was removed to prevent any further musical rape of late-70s sensibilities. After the sleight-of-hand was complete, Negative Trend were allowed back inside...and discovered they would not be closing America's largest punk event. With no gear to plug into, everyone had to settle for providing a backstage riot under the watchful glare of the nation's media, as they recorded the flying beer, hot dogs and popcorn.

Shortly after the Pistols' disastrous finale, Negative Trend played the Mabuhay and were visited by McLaren and Rory Johnston (Malcolm's American representative who secured the Pistols' recording contract with Warners). They expressed their enthusiasm by offering to manage the band. In a case of snatching defeat from the jaws of victory, Will Shatter told them 'Fuck you man, we're anarchists! We don't need someone to be a little puppetmaster, dangling us on a string!' Well, getting your message across to a larger audience isn't everything. The band shared an apartment on the edge of the Tenderloin, and continued to play rubble-strewn gigs within San Francisco proper. The scene remained an inner-city phenomenon, ignored and derided by the mainstream music machine; it wouldn't be too long, though, before suburban kids embraced punk, or whatever they thought it was. KSAN-FM's broadcast of the Pistols' Winterland performance helped to focus attention towards the new music, due to their strong signal which covered the urban area and beyond.

During March 1978 Negative Trend became the first California punk act to tour the Northwest, playing Portland, Seattle and Vancouver BC. The Dils and Avengers would also play this new circuit the following month. Speed ruled the day, and the highway patrol clocked Negative Trend driving over 1OOMPH enroute to Portland. Being the dull, dreary and drab place it was—no flyers allowed on telephone poles!—Seattle's music fans challenged their boredom to give Negative Trend a great reception at 'The Bird.’ Aside from the intense response and interference from city fire marshals, a life-sized painting of Marie Osmond was gleefully abused during the band's set.

The border crossing towards Vancouver, Canada proved to be another adventure. Regardless of your appearance, authorities were not hellbent on providing a simple 'wave-through.’ When transporting band gear through a checkpoint, financial deposits and paperwork were demanded. The solution to this problem? A quarter-mile before the border, Negative Trend used a hiking trail to carry their gear into Canada. Their driver crossed by posing as a tourist, then retrieved everyone to play a successful underground show in Vancouver.

Back in San Francisco, Negative Trend were locked into an escalating cycle of violence, caused in part by their stance and the audience they attracted. Rozz observes,"Things continued to get more and more violent at our shows. Every time we played, there were fires, there was bottles and crap flying. A guy doused me with lighter fluid, and was trying to light me on fire! It started with that 'New World Liberation Front' song, and had kinda caused a backlash. It was getting real ugly." 'N.W.L.F. concerned itself with class warfare, and was inspired by local terrorists who set off many bombs in the City during early 1977, including a hit on the Opera House.

A certain amount of 'groupthink' starts asserting itself when you find seven people living together in one apartment. Splatter-taxi riding, street mischief and the overall theme of revolt continued to hold their collective attention. Political convictions lead the band to befriend 'Upshot,’ an organization who were described as 'a loose collection of writers who chronicle the breakdown of society.’ Some type of anarchist collective, Upshot had rumored associations with 1960s radicals the Weather Underground. To suggest that Upshot viewed Negative Trend as 'like-minded people in the spotlight,’ or as a convenient P.R. vehicle is conjecture. 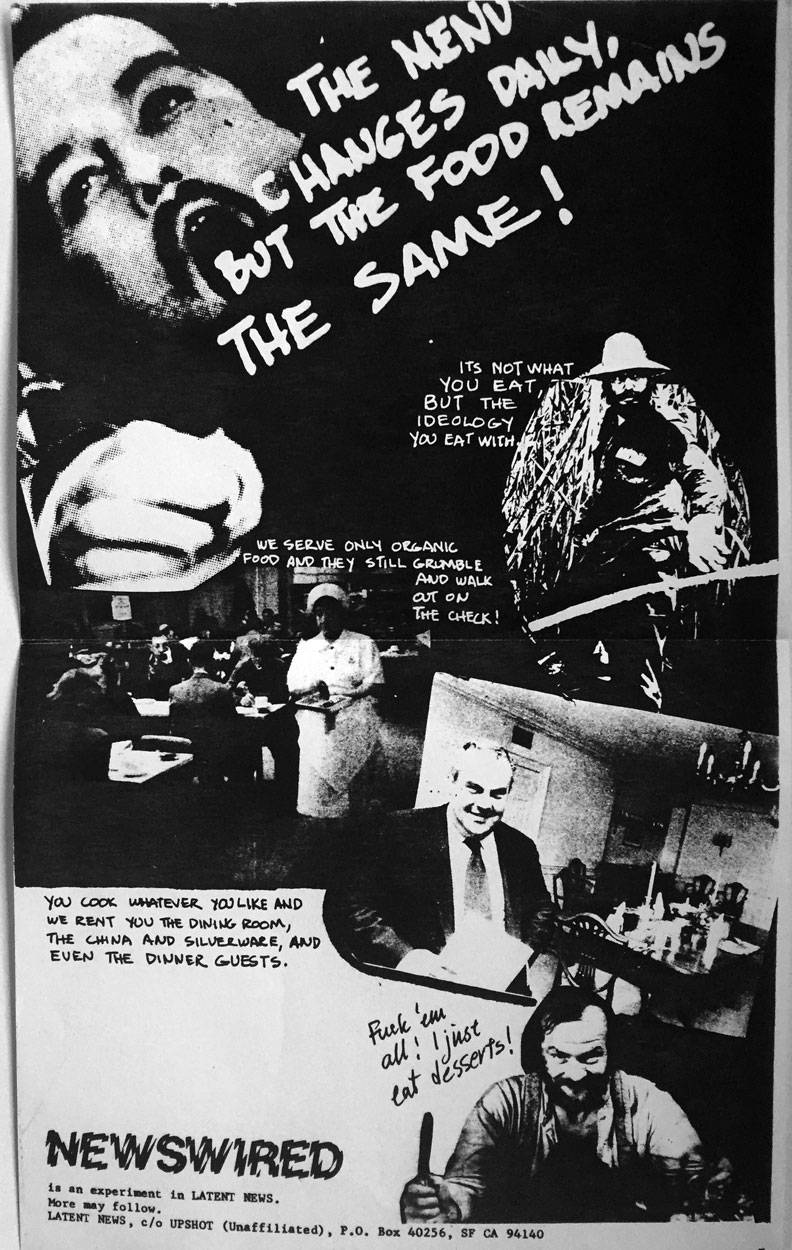 One of many flyers handed out by "Upshot" in the late 1970s... produced by John and Paula Zerzan and occasional friends.

Nevertheless, Rozz recounts,"We started getting these people from Upshot coming around, they talked us into handing out their political pamphlets at our shows. Then they tried to control our political thinking. We got involved in petty terrorism; I mean we went out and blew up some stuff, it really got stupid. More and more of these 'hardcore political types' were coming, and just turning our shows into a riot—so we could get in the paper and publicize their cause. It was fun “cause we were breaking all the records on how many people we would pack into the Mabuhay. But it became increasingly, troubled loners and weirdos coming in. It wasn't just cool people dancing the pogo towards the end, it was people just wanting to bust chairs over people's heads, literally."

Traffic picked up between San Francisco and Los Angeles, with bands shuttling back and forth to play shows in new territory. Negative Trend were booked to play with the Dils at L.A.'s Whisky during May 1978. Rozz held a profound dislike of L.A., having been there for "the lame end of the glitter era." Deciding he needed a break before the Whisky show, Rozz pawned his Flying V guitar (which Craig had always used), and bought a plane ticket to Oregon. The band went the opposite direction, traveling south to make the show. Playing a cheap guitar that wouldn't stay in tune, a frustrated Craig pummeled his axe to bits after several songs. Will also smashed his bass, giving a unified presentation. The result? Audience demands for an encore, but no instruments to play. It seems a fitting end to their first era; relentless, howling music played to the margins, a lasting measure of physical damage, their musical instruments in ruins, a brief but intense jolt to the musical barometer of the late 1970s. 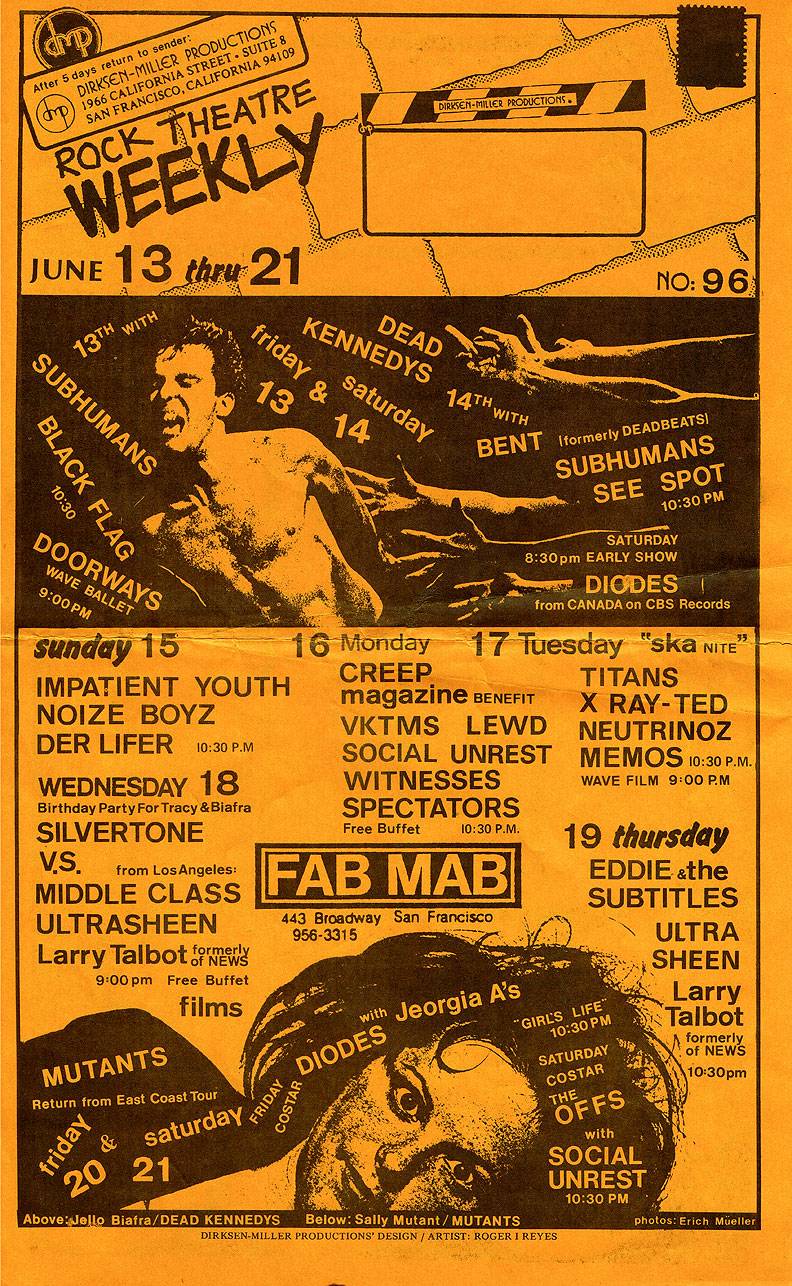 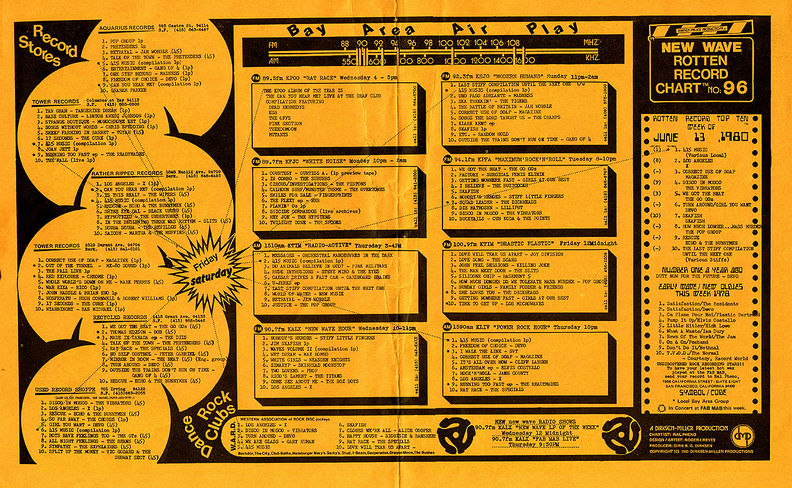