Reprinted from the Historical Souvenir Booklet of Black History Week, published by the African-American Historical and Cultural Society, February 1978. 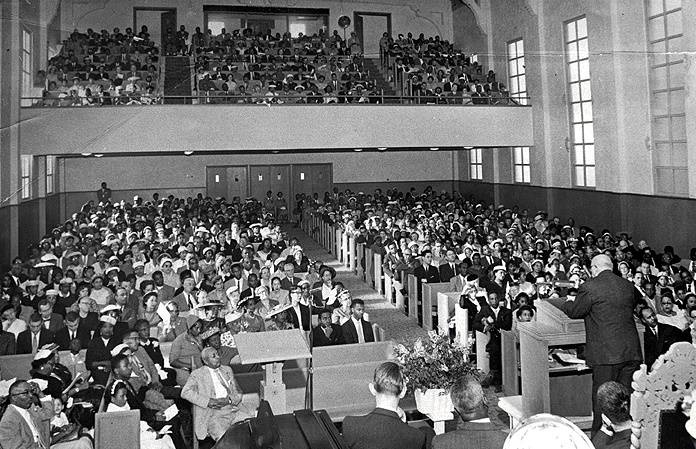 W.E.B. Du Bois, founder of the National Association for the Advancement of Colored People in the beginning of the 20th century, here addresses San Francisco's Third Baptist Church in 1958.

The San Francisco Branch of the National Association for the Advancement of Colored People was organized in 1929, by a small group of people led by Rev. John M. Brown of Bethel A.M.E. Church. Typical of the years to come, the organization meetings took place in a church, the A.M.E. Zion at 1669 Geary; and a lawyer, Edward D. Mabson, was elected president.

The Branch's purpose and aims, according to its constitution are: "to improve the political, educational, social and economic status of minority groups; to eliminate racial prejudice; to keep the public aware of the adverse effects of racial discrimination, and to take all lawful action to secure its elimination."

The Branch has worked for many years on fair housing in San Francisco. Its biggest case in the early 1950's was Banks vs. Housing Authority, which it won in the State Supreme Court. This ruling forbid the practice of restricting residence in public housing according to neighborhood patterns. Prior to the ruling, the only projects open to Blacks had been Channel, Double Rock, Hunters Point, Valencia Gardens and Westside Courts. In the 1960's, the Branch led picket lines against restrictions on the Sunstream Homes at Serramonte, and the tract was opened.

In the early days, a drive for employment in the Black community found the local NAACP successfully picketing stores on Fillmore and the Uptown Theatre. Militant Branch leadership, often with help from labor unions, integrated jobs on the waterfront and in the Muni Railway. Branch leadership also claimed to have integrated school district employees, but this effort had very limited success. Another employment victory was won in a lawsuit initiated by the Branch, James vs. Marin Shipyards, which made subsidiary, segregated unions illegal. The Branch's 1959 suit of Terry vs. Civil Service Commission, outlawed an attempt in San Francisco to limit the educational institutions from which applicants could qualify for such Civil Service jobs as instructor, librarian, actuary, and recreation director.

NAACP pushed Fair Employment Practices legislation as well. In 1956, NAACP boycotted Yellow Cab for jobs. When the Jack Tar Hotel opened in 1960, with its only Black employees as doormen and maids, community pressure led by the Branch soon forced the hotel to hire at least one Black in the clerical, bartending, room service and accounting departments. The name of NAACP was heard in the hotel and auto row sit-ins, and members of the Branch's Legal Redress Committee represented defendants at some of the sit-in trials.

In education, the Branch fought for respect in the mid-1950's when George Washington High School publicized the play "Huckleberry Finn" with its character "Nigger Jim." In the early 1960's, the Branch filed a lawsuit to integrate the schools, and later dismissed it in exchange for a high-level Central School Office administrator (Black) whose responsibility was human relations. The Education Committee under Reginald Major pried loose long-secret, school-by-school racial data, the first in an ever-increasing stream of information given out by the S.F.U.S.D. With Lois Barnes, the Committee compiled reports on the relationships of pupil race to teacher salary to student achievement, school-by-school. The Branch again sued the Board of Education to integrate elementary schools, and in the spring of 1971, it prevailed. The S.F.U.S.D, is still operating under Judge Wiegel's orders from this case.

In pursuit of other aims, the S.F. Branch has conducted, or participated in voter registration drives at almost every general election. To support the Southern student lunch counter sit-ins in 1960, it led months-long picketing and boycott at S.F. Kress and Woolworth stores. It tried a credit union in 1962. In 1968, the three Branch presidents, acting as the S.F. Metropolitan Council, cried out at the police homicide of Matthew Johnson at Hunters Point and demanded an 11-Point reform of the Police Department, including demilitarization, clear rules for use of weapons, training in dealing with stress, integration, and several kinds of improvement in recruitment, including psychiatric screening.

Recently, the San Francisco Branch of the NAACP has been suing for equal hiring and promotion in the Police and Fire Departments. It raised money for the Mississippi fine, and conducted community workshops in housing and in school suspensions.