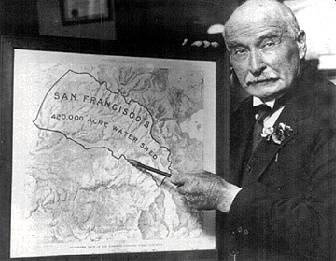 When O'Shaughnessy took office, the city was about to celebrate the opening of the first municipally owned streetcar line in any major city. The city had just received an extensive report from a nationally prominent streetcar system consultant that outlined the public transportation needs of the city, especially for the rapidly approaching Panama Pacific International Exposition (SAILING TO BYZANTIUM: 1915 Panama Pacific International Exposition |PPIE) and for the rapidly developing residential areas in the southern and western parts of the city. O'Shaughnessy set to work drafting plans for streetcar lines to serve the exposition, and the voters approved a bond issue in August 1913, with the funds available on January 1, 1914; construction began on January 2. On February 26, 1915, opening day of the exposition, one new line carried passengers from the working-class Potrero district to the PPIE in the Marina district via Van Ness Avenue. A second new line connected the downtown retail shopping district to the Marina via the Stockton Street tunnel; a third line -- acquired from private ownership -- ran from the Ferry Building via Columbus and Union streets; and other new lines ran along California, Chestnut, and Greenwich streets -- all designed and built in the twenty-nine months since O'Shaughnessy's appointment.