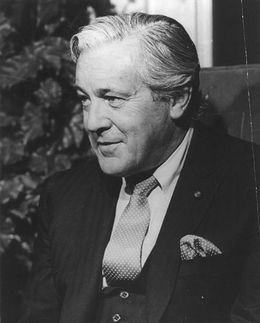 Has there ever been a San Franciscan more San Franciscan than Melvin Belli? Maybe not, but is that a good thing? Sure the man was liberal, innovative, symbiotic, romantic, compassionate and fun-loving, characteristics that can earn merit badges for city residents, but he was also egotistical, opinionated, extravagant and self-promoting, some of the less endearing traits associated with our citizens.

As a lawyer he was known as The King of Torts. A tort is an injury claim for which damages can be awarded. Over his career he collected over 600 million dollars in such claims for his clients, skimming enough off the top to make him quite a rich man.

But for Belli it wasn’t all about the money. Born in 1907 to a prosperous Sonora, California family, he had a life-altering experience when, upon graduating from law school during the heart of the Depression, he got a job with the Works Progress Administration (WPA),riding the rails with the hobos to report on the circumstances of this uprooted and growing underclass. On this job,he witnessed the Los Angeles police clubbing Okies as they got off the trains. The experience planted in him a desire to balance his representation of the rich and famous with a heavy dose of work standing up for folks few had ever heard of.

Belli looked like a lawyer from central casting. He had a square jaw and portly good looks and an oleaginous voice that observers noted he could play like a symphony when he performed in front of a jury. But if his outward manner fit the lawyerly stereotype, his trial techniques were anything but ordinary. More than anyone else, he was the father of what has been called Demonstrative Evidence. His courtroom appearances were supported with photos, movies, scale models, human skeletons, animals and prosthesis, anything that would cause the jury to sit up and take notice. In one case he pursued damages for a woman who had lost her leg in an accident. On the first day of the trial he brought a wrapped package to court that looked like it could be nothing other than a leg. Throughout the trial the jury was captivated by their imaginings of this gruesome object. Finally, during his summation, Belli unwrapped not the woman’s leg, but her prosthesis, passing it among the jurors as he proclaimed “This is what my client will wear for the rest of her life, adding sarcastically “feel the pulse of blood as it flow through her veins,” expounding on this theme as he won for the woman a substantial judgment.

Belli was also always on the lookout for whole groups of people who had been wronged. In one case he gained a judgment $32,000.000 against a crematorium that had played fast and loose with the remains of the dead. Though he was not beyond going to court to defend an accused miscreant’s parking ticket, it was his work with celebrity clients that most often got his name in the papers. He looked out for the legal interests of Errol Flynn, Chuck Berry, Muhammad Ali, The Rolling Stones, Lana Turner, Tony Curtis, Mae West and many other of the rich and famous. He defended Zza Zza Gabor when Elke Sommers sued Gabor for calling her a “financially strapped Hollywood has-been.” The crooked TV evangelists Jim and Tami Baker, were so pleased with his representation they presented him with a gold- plated Bible. Belli had great talent for sniffing out politically charged cases, pleading for Lenny Bruce’s right to utter four-letter words and the right of Mario Savio, the key figure in the University of California Free Speech Movement, to shut the institution down when fighting the schools heavy-handed efforts to curtail free expression. He took on the divorce case of Martha Mitchell against her husband, John Mitchell, Richard Nixon’s oily Attorney General. 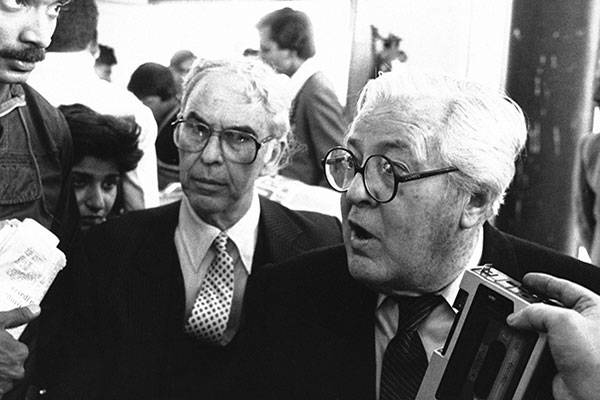 Melvin Belli at a press conference in Bhopal, India, after the deaths of over 2,000 people due to the negligence of Dow Chemical.

Belli took particular pleasure in representing the worst of the worst, including the appeals of many death row inmates. When Robert Kennedy’s assassin Sirhan Sirhan needed a lawyer, Belli signed up. He would say “there was never a deed so foul that something couldn’t be said for the guy. That’s why we need lawyers.”

Despite his courtroom antics, Belli took his courtroom work very seriously, not so much other aspects of his life. His law office on Montgomery Street resembled nothing so much as a high-end Victorian bordello. He did not conceal the fact that he caroused regularly with his friend Errol “In like Flynn” Flynn. He listed his dog in the San Francisco telephone booth and, on one occasion, brought a speaker to a Bar Association meeting who he introduced as”“an expert on tax evasion.” The speaker turned out to be expert tax evader and gangster Mickey Cohen.

Of all the legal skirmishes associated with Melvin Belli the one that generated the most attention was his defense, for free, of Jack Ruby, the assassin of Lee Harvey Oswald, the man who killed Jack Kennedy. Belli believed that Ruby was a crazy little man who should be judged not guilty by reason of insanity. The judge and jury didn’t agree. When the verdict was read Belli approached the bench with tears in his eyes “You have blood on your hands” he shouted at the judge, then he passed judgment on Dallas – a “sick, sick, sick city.”

Indiscretions such as this did not sit well with the American Bar Association which banned Belli from membership. That didn’t bother him much. “Being rejected from the Bar Association is kind of like being kicked out of the Book of the Month Club” he said. 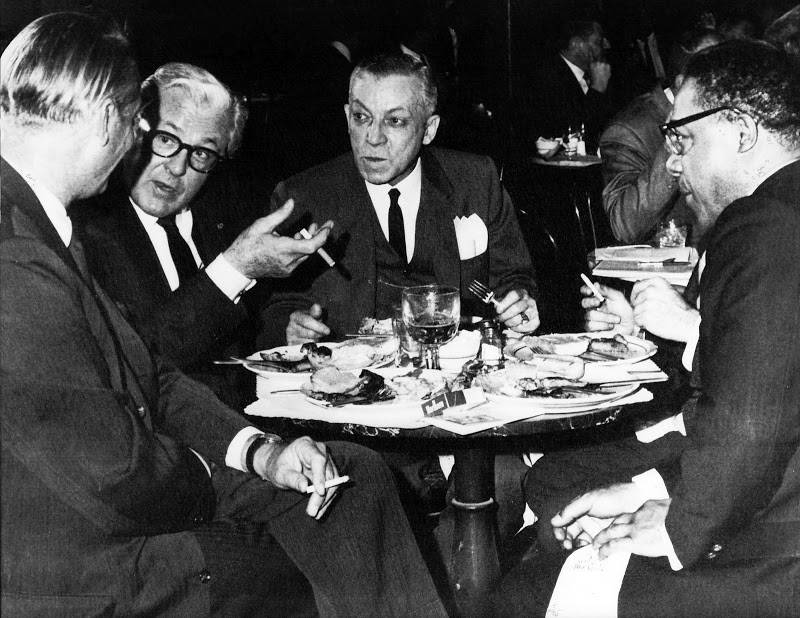 Famous attornies Melvin Belli and Jake Ehrlich at a bar with some others discussing the trade.

In his later years Belli continued to win big judgments but his behavior grew increasingly bizarre. When he was accused of having sex with a client, the heir to the Eli Lilly fortune, he admitted his misbehavior, but said it shouldn’t be a problem. “I didn’t bill her for the hours,” he said.

Some of his cases got curiouser and curiouser. He sued the San Francisco Giants when the radiant heating system at the notoriously freezing Candlestick Park went on the fritz, showing up for his summation wearing an Alaska parka and boots. When the team did not pay up, he tried to attach the Scotch supply of team owner Horace Stoneham.

A couple of years before he died in 1995, his world began to collapse. He paid out a huge divorce settlement, fell out with his partners, was sued more than once for malpractice, and was targeted for tax evasion. He declared bankruptcy. When his dog turned up missing, he offered a reward for its return of either $1000 or 3 hours of legal advice. The consensus was the finder should go for the $1000.

As with many complicated people, the judgmental jury remains out. There are those who consider Belli a publicity mad pettifogger. Presumably those would not include the survivors of those who died in a 1986 Newfoundland Air crash who were awarded millions of dollars because of his efforts. Nor others on a long list of clients who received much deserved awards. Throughout his career he was accused, of course, of being an ambulance chaser. “Not true,” he said, I always got there before the ambulance.”