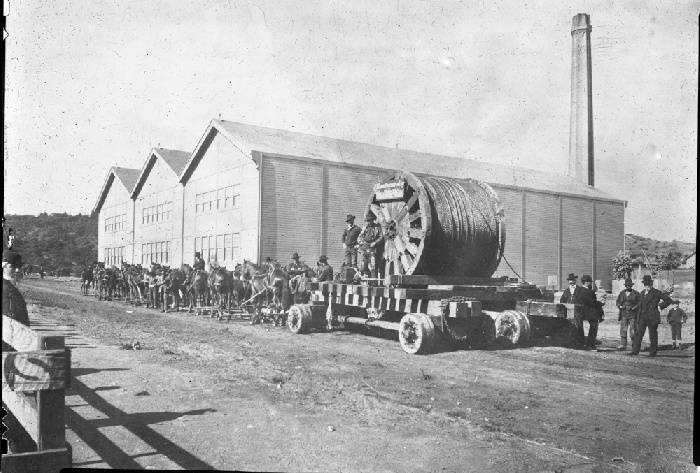 Built in 1883, the McAllister Car Barn and Powerhouse was the property of the Market Street Railway. It was on what was then the #5 McAllister cable car line, which ran from the Ferry Building out Market Street, then up McAllister to the car barn. The line then cut diagonally across the car barn property to Fulton and continued out Fulton to its terminus at Stanyan Street. Passengers could get out there and walk into Golden Gate Park or visit the Park House Saloon at that intersection. The powerhouse drove the cable car machinery for the line. The car barn was built to be a two story building, but the second floor was never added to the structure so there were very high ceilings inside. 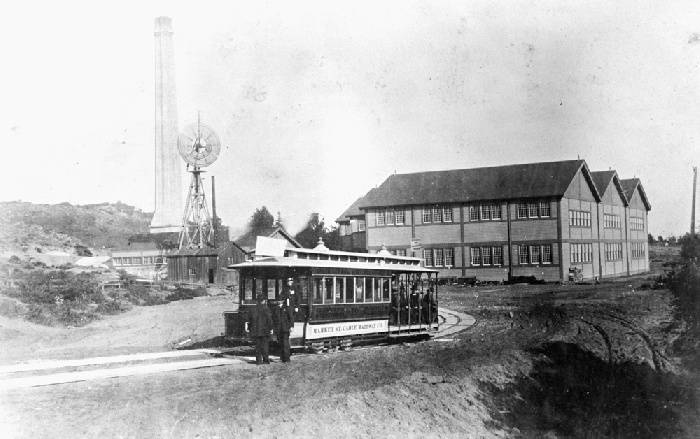 Looking east at McAllister Car Barn and Powerhouse, circa 1890.

Of course, back then, those streets were not entirely laid out. As the cable cars headed west out of the McAllister Car Barn, they would immediately pass by Masonic Cemetery on the south side of Lone Mountain. In 1892, the line was extended down Fulton Street to 7th Avenue. The #5 McAllister line was extremely popular as many people wanted to visit the Park, particularly during the 1894 Midwinter Fair. For a period of time, the #5 McAllister line had the largest fleet of cable cars on any line in the City. The car barn housed just the #5 McAllister fleet initially. 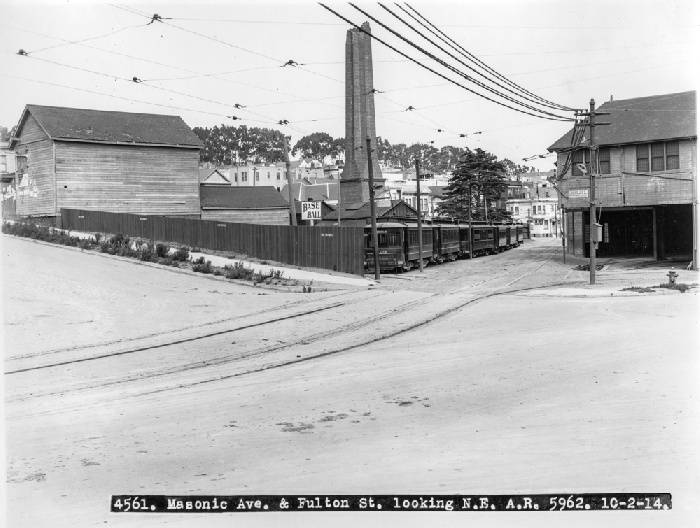 The road grid did fill in around the McAllister Car Barn and Powerhouse and the line was extended again in 1904 to 12th Avenue. Two years later though, the event that literally shaped San Francisco had a huge impact on the line. The Powerhouse was severely damaged in the 1906 earthquake. The quake knocked off the top of the powerhouse’s smokestack and caused other damage, resulting in the powerhouse being decommissioned and a switch to streetcars on the line instead of cable cars. 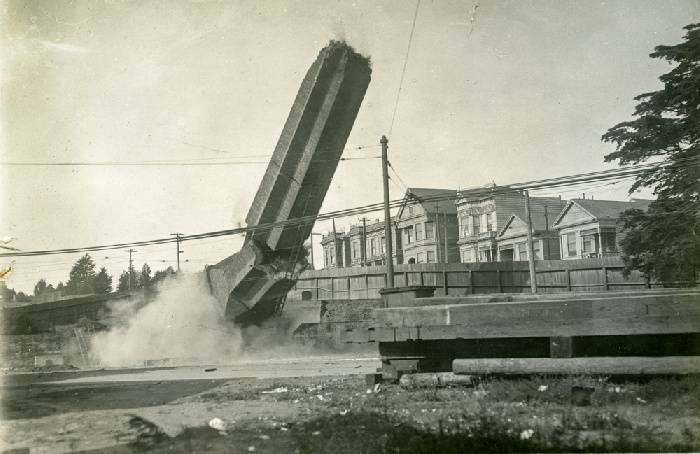 The rest of the smokestack was demolished in 1914. Because of damage to the #21 Hayes Car Barn in the 1906 quake, streetcar storage for that line was moved to the McAllister Car Barn. After the Powerhouse and smokestack were gone, some side tracks for additional outdoor streetcar storage were built. 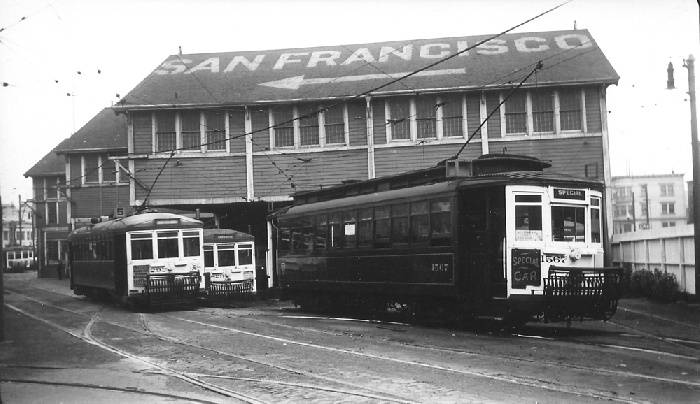 McAllister Car Barn and streetcars, circa 1937.

In 1909, the Market Street Railway took over another streetcar line that ran on Fulton Street between 6th Avenue and 36th Avenue, where the Cairns Hotel was located. That streetcar line was then extended on Fulton to Ocean Beach so that that the #5 McAllister line could run from the Ferry Building to the ocean. In 1911, the line was extended north to a loop near Balboa Street. Where the line terminated at Ocean Beach, there was no Playland initially. There were a few concessions and the Cliff House, Sutro Baths, and the Ocean Beach Pavilion were a short walk away. The #5 McAllister streetcar line competed with a Park and Ocean Railroad line that terminated nearby at La Playa and Balboa. Soon though, additional concessions and Chutes-at-the-Beach were added and the area would morph into Playland-at-the-Beach in the 1920s. 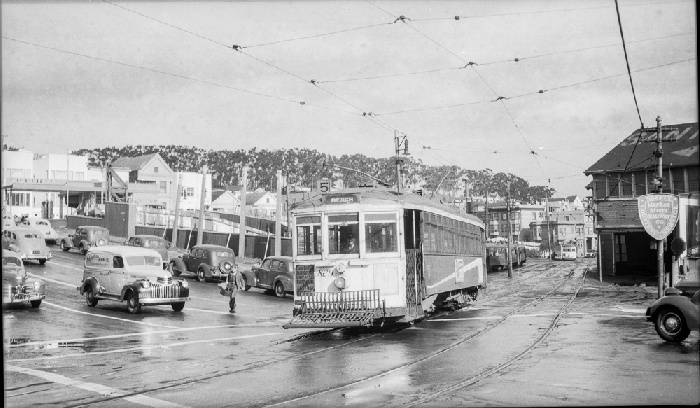 In the early 1900s, the Market Street Railway had changed ownership and became the United Railroads of San Francisco (“URR”). The new owners bought up several local private transportation companies. Meanwhile, San Francisco was trying to do the same. It took over the Park and Ocean Railroad line and converted it to a streetcar line in 1912, the first line in the new Muni system. The URR suffered from the competition and other issues and reorganized in 1918, becoming the Market Street Railway again. 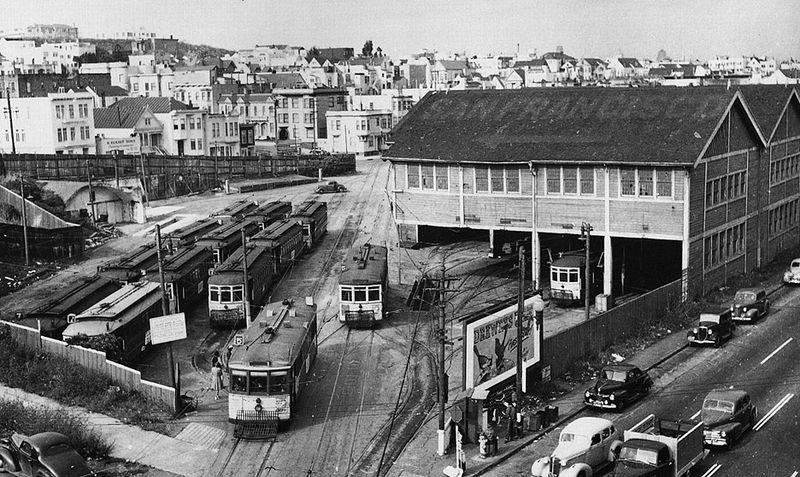 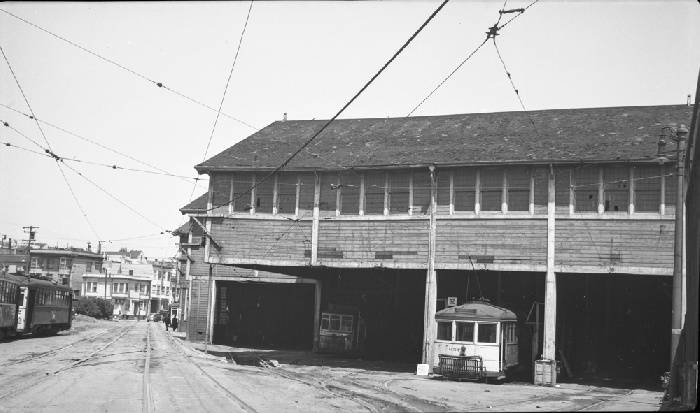 Many thanks to Emiliano Echeverria for his expert Market Street Railway knowledge.