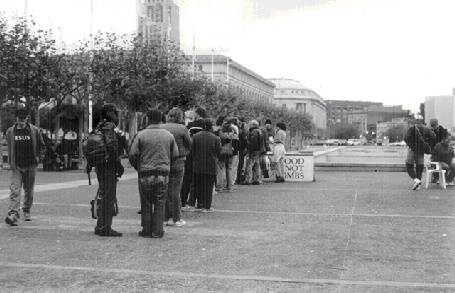 FNB Activists FOOD NOT BOMBS served free food right in front of Agnos' City Hall every day, leading to an ongoing campaign of police repression remarkable for its unconstitutionality as much as its general invisibility.

January 8, 1988January 8, 1992: Career Democratic party politician, he left a comfortable seat in the state legislature to run for mayor, defeating the more conservative John Molinari by putting together a similar progressive coalition that had elected Moscone a decade earlier. Once in power, Agnos quickly lost support on the left as his lifelong political opportunism led him to follow policies more concerned with appeasing downtown interests than pushing a progressive agenda. He was narrowly defeated in the '91 elections by his former (and fired) police chief, Frank Jordan.

"Agnos was elected after a lot of community people had gone to him and said 'God we're just tired of Dianne, we just have to have a change and we need someone who is more in touch with us.'

And Art had been very good [as a state legislator] in Sacramento, good constituent service, worked with us on housing issues, on appropriations that really meant a lot to people on health care and social services. He had delivered the goods to the city and people knew that. And he was a very personable person on the surface. I'm one of the people who went to him and asked him to run against Feinstein. But when he finally ran he had all the right moves in his campaign, but what we didn't know about Art Agnos would fill a book. One of the things we didn't know about him is that he's dazzled by people that he hires. He really only lived in the city as a resident for maybe 2 years in the early '70s. Then he became a commuter and really lived in Sacramento.

The first time he really lived in the city was after he was elected mayor and had to buy a house, because he'd rented on Potrero Hill, and lived in Sacramento five and 1/2 days a week and came down to the city 1 1/2 days a week. He owned a house in Sacramento, he lived there. The mentality of a state legislator is different from the mentality of someone locally. They are used to dealing with local agencies but they're used to dealing with them while controlling their money. It is slightly easier to get people to pay attention to you when you're on the appropriations committee or the budget committee, and you can push them around a little bit. And you didn't have to choose the people, they were there. Legislative committees push people around because they're not seen in action in the home districts.

It's completely different when you're at City Hall, where people are seeing you every day, you read the papers, you're much more visible, even as a Supervisor. People get to see you a lot more, they get to see how you deal with people. Agnos was impressed by people with a lot of credentials, and he brought in people with credentials who didn't have a lot of contact with the city. So he was getting advice from the staff that he brought down from Sacramento ... people who didn't know the city, didn't know the insanity of the civil service system. They didn't have any roots in the community, they didn't know who they had to deal with, they didn't know where the bodies were buried in their own department, they didn't know who they had to give some respect to, and problem after problem, because Art thought he knew it all.

Virtually every modifying string of adjectives used on Art Agnos uses 'arrogant.' He thought he knew the city and he didn't, and he didn't have people around him who knew what really had to be done, and who to listen to, and what bureaucrat was giving him a line of bull. He kept some people, like the Planning Director, who he shouldn't have kept because the Planning Director had a mentality that was antithetical to Art's but Art didn't know. The Planning Director was Dean Macris, and under him was the Director of Planning, George Williams -- I had a hit list of one person that I wanted fired. I wanted him because he was hostile to community people and groups and continually wormed his way around to disempower people. His attitude was he was going to take all the power vested in the Planning Department staff. We had pitched battle after pitched battle on things like Mission Bay and the Downtown Plan because his attitude was 'let's make a deal' because that gives us power." And so there was all this stuff that wasn't prohibited, wasn't permitted, but was 'let's make a deal.' Maybe we have a policy of not shadowing streets, but it's negotiable. We have a policy that developers have to pay for affordable housing, but it's negotiable. Until we got that changed at the Board of Supervisors.

Anyway, why did Art Agnos lose? He lost to a great extent because he wasn't able to understand the people who were his constituency. That's kind of like a basic plot. You have to remember who it is that elected you. (When Art Agnos romped over Jack Molinari, who was the candidate of the old-line establishment in the 1987 election, when he walked over him, he thought he could do anything he wanted.) He really did get an enormous landslide, about 70%, it was huge. But he didn't consistently deliver to the people who won it for him. And some of us sat out the election. Because he could not comprehend his own flaws as a human being and how they affected his politics, because he would go to war with me, why go to war with me? I'm one of the people you're supposed to be working with. Yes I'm a pain in the butt, I'm excessive on the things I care about, but Art Agnos needs me, I'm part of his coalition, I was part of it, we worked hard to get him elected the first time, and he alienated himself consistently from just about every other constituency that had helped him. Because he was having illusions that he was now operating in a different circle, with the business elite, and those folks that were antithetical to his real politics. His real politics as a human being are very progressive. Art Agnos is not a pig, he is not Dianne Feinstein. His gut politics are very sound at the level of where he was going to vote on welfare reform, on providing money for affordable housing, on police issues. His base politics when you talk about principles were good. He didn't know how to work with people and he didn't know how to run the city, and he didn't know how to get re-elected because of that. 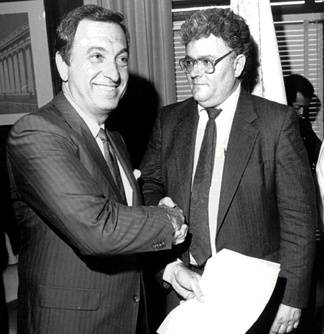